Breaking the code: Women are striding into tech-related industries

When children are asked to draw a scientist, they almost always draw a male, according to a research conducted by the American Association of University Women (AAUW).

The non-profit organisation, which advances equity for women and girls through advocacy, education and research, says this “unconscious bias” associates the science and math fields with male and humanities and arts fields with female.

This is one of the reasons why Nabihah Hashim, who is based in Penang, feels there is a need to start inspiring girls to develop passion for technology at a young age.

To foster interest in tech, she designed the learning curriculum for GEMS (Girls in Engineering, Math and Science), a programme that teaches girls in primary and secondary schools about robotics.

“In the 32-week programme, the girls explore how to solve issues in their community through robotics and programming,” says Nabihah, who developed the after-school course for social enterprise Arus Academy.

“We bring them around town and conduct a survey to ask people what are the issues that are bothering them. The girls then try to create a robot that can be used to address some of the issues.” Nabihah (left) says at the end of the GEMS programme, the girls will be asked to present their robotics project at a community exhibition such as the Penang International Science Fair. — Arus Academy

GEM students from Sekolah Kebangsaan Machang Bubok created DefensePack, a backpack with sensors that are capable of detecting if a person is trying to pull the bag from behind.

When it detects an “attacker”, a robotic arm will grab the person and sound off a siren.

The idea for the invention came from a team member who felt unsafe while walking home alone, she says.

Nabihah initially charged RM180 per person but decided to waive the fee as most of the students come from underprivileged backgrounds.

“A lot of families here couldn’t afford the fee. So I just decided to conduct the programme in schools and try to find funding or sponsors whenever possible,” she says.

“I believe when we get it going, the money will come eventually.”

At the end of the programme, the girls will be asked to present their robotics project at a community exhibition such as the Penang International Science Fair.

“When we started GEMS in 2018, we wanted to proactively address gender bias that we feel is prevalent in STEM (Science, Technology, Engineering and Mathematics) fields,” she says.

In 2017, The Star reported that the lack of women in STEM fields is a “global problem”. Data from LinkedIn showed that STEM fields in Asia Pacific were dominated by men, with women only accounting for 25%.

The gap widens at senior-level positions, with females only representing 16%.

Nabihah believes this is due to gender stereotyping which makes girls believe that they will not excel in subjects like maths.

To counter this she wants to change the way girls think, hoping to foster a “growth mindset” so they will believe that they can always be a better version of themselves.

“In our programme, we also introduce participants to female role models like Academy of Sciences Malaysia Fellow Prof Datuk Dr Halimaton Hamdan and Nur Adlyka Ainul Annuar, a PhD astrophysics student who was part of the team that found evidence of the supermassive black hole in space,” says Nabihah.

Class of its own

When Vani Mahadevan and Purry Wijendra set up TechSprint, a women-only school last year, it was with the goal of providing women with a comfortable and open space for learning tech.

“There are a lot of career options and flexibility in the ever-growing tech field for women. We want to give women, regardless of their prior working background, education level or marital status, the opportunity to learn something that we feel is a tangible and valid option,” Vani says. Vani set up TechSprint with the goal to provide women a comfortable and open space for learning about tech.

They will then be tasked with developing apps using programming languages like Vue, React.js and Heroku.

One of the participants, Pontipe Kopkaew, who is of Thai-Liberian parentage, signed up for the bootcamp hoping to apply the lessons she learnt for the greater good when she goes back to West Africa.

“I want to share my knowledge in programming to develop an app or form a startup to contribute to the community back home,” Kopkaew says.

Fellow participant Sakinah Al-Mubarakah Muhamad, who has a background in engineering, wanted to explore new opportunities through coding.

“The classes are very challenging especially for someone with no prior knowledge of programming. But I want to face that challenge,” Sakinah says. 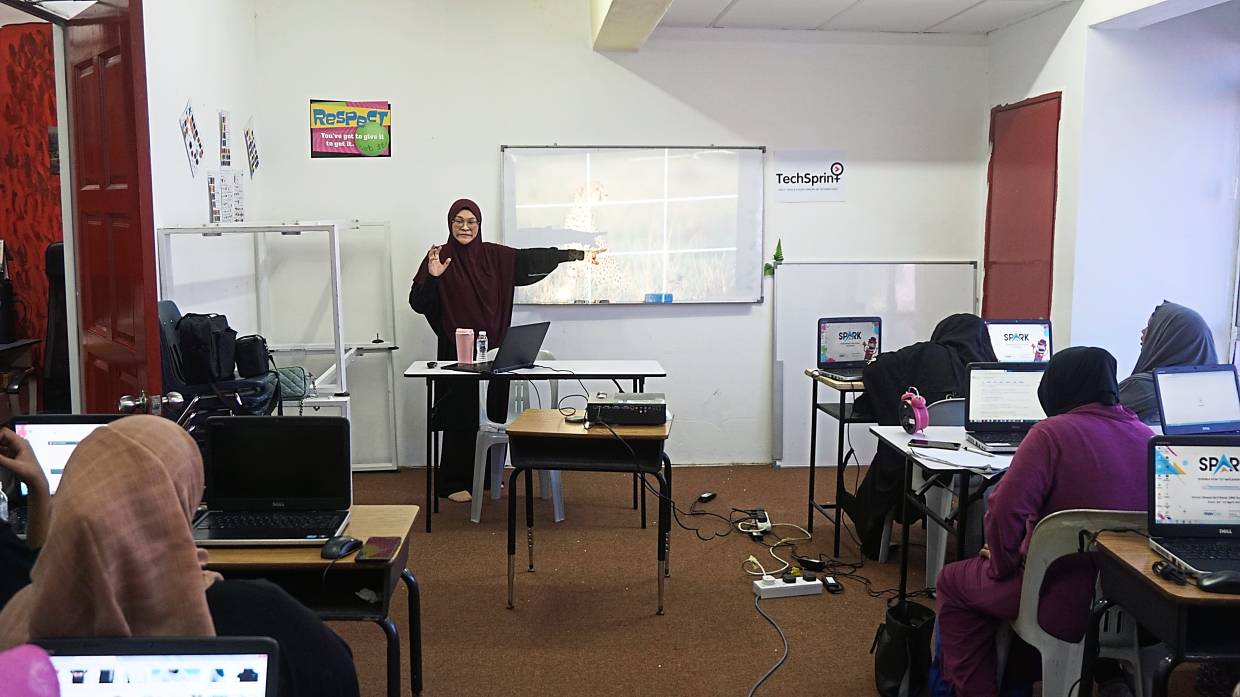 Adelina (standing) conducted a training session to teach women at SWAM to use social media to start a small business. — TechSprint

Recently, it organised a free three-day technology and social media programme at the Somali Women Association of Malaysia (SWAM), a non-profit organisation that empowers women and children in the refugee community.

Trainer Adelina Iskandar was tasked with teaching the class how to use social media as a tool for small businesses.

“My participants wanted to learn how to use social media to promote baked goods,” she says.

“I taught them to run a social media page using free apps and their smartphone camera.”

TechSprint’s Purry says she understands why some women are doubtful about entering the male-dominated tech field.

Her own experience at a tech department in a previous company made her feel her superiors often dismissed her ideas because she was a woman.

“At first I did not want to believe it so I asked a male junior developer to present my idea which my superiors had rejected earlier. And they accepted it,” she claims. CodeOp participant Larviania Somasundram, a graduate with a degree in mechatronic engineering, faced a somewhat similar issue during an internship which made her switch careers.

“I realised that the other female staff with engineering degrees in my office were only doing administrative work and deskbound duties. When I requested to do fieldwork, I was told ‘no’,” she says.

“Then I noticed that those who got to do fieldwork were all males.”

Larviania feels the years of studying engineering did not prepare her for the harsh reality of being a young woman in the industry.

She eventually quit to study coding, hoping that it will offer a better work life with more prospects.

That’s why initiatives are needed at work to help women feel included and empowered, says Purry.

“During the orientation week at CodeOp, we train our participants to overcome the ‘imposter syndrome’, the feeling that they may not be good enough despite their achievements,” she says.

“We ask them to list down three things that they feel are remarkable about themselves which they can use as reminders to get through tough times.”

Vani admits that CodeOp could be “intense” as participants are required to commit to daily exercises and weekly exams.

“But we are committed to help our participants complete the programme by holding motivational sessions and letting them speak to female industry professionals. On Fridays, we have a one-on-one counselling session to find out how they are coping,” she says.

Instilling confidence in girls is also important because the “brogrammer culture” has turned some companies into an all-boys club, says Nabihah, adding that this could make women feel like they don’t belong in such places.

“This is why more women need to be in the industry and we should start by giving girls the confidence and skills from a young age,” she says. 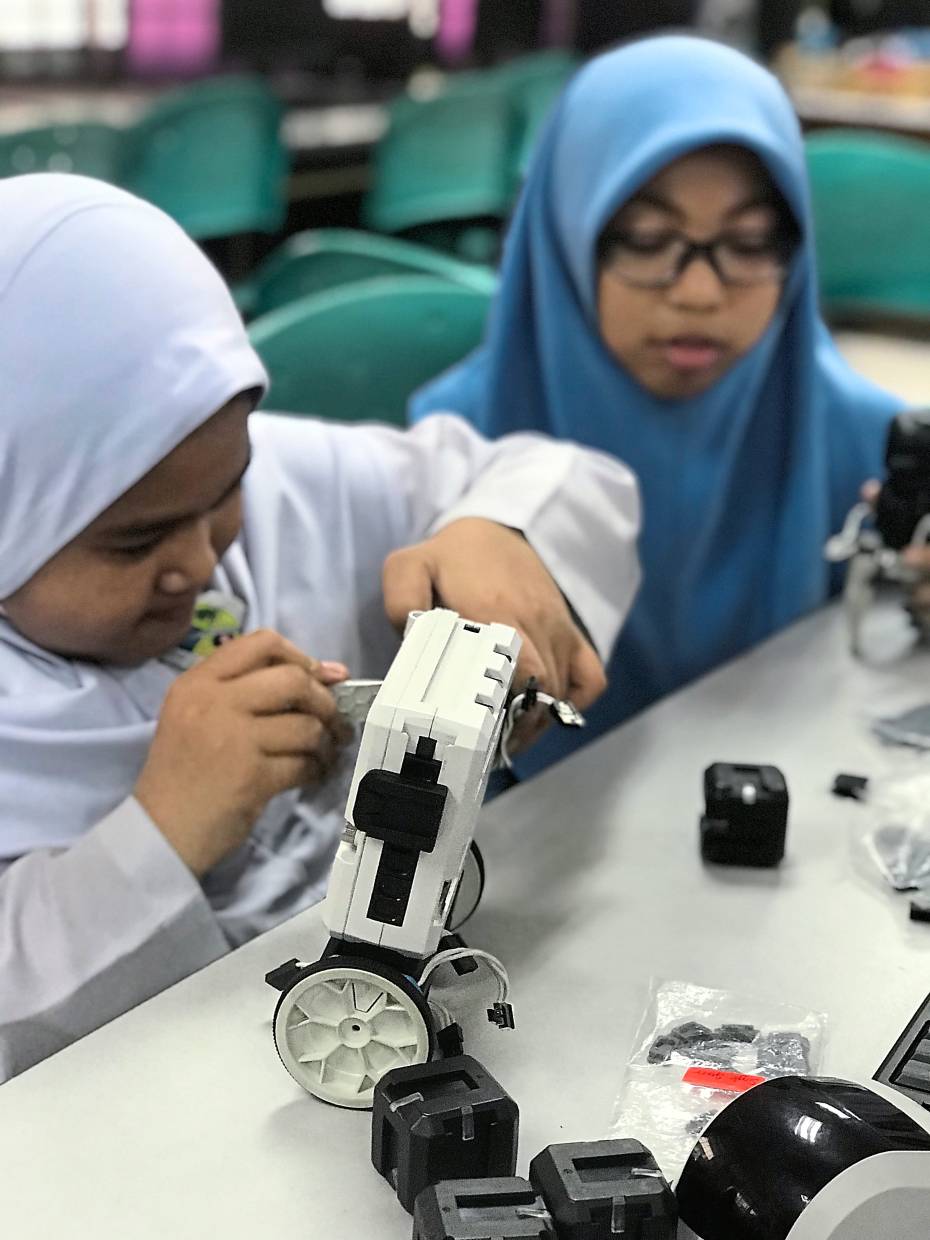 Participants learning to solve issues in their community through robotics. — Arus Academy

In GEMS, Nabibah says confidence is built by making the participants do presentations, as well as when they interview others to create a solution for a problem.

“At the beginning, they were very quiet. They didn’t want to express any opinions. We help to overcome that by giving them five minutes to talk about their role models,” she says.

Nabihah beams proudly as she recounts 12 of her participants competing in the robotics open design category at the Penang International Science Fair in 2019.

“They were 10 to 12 years of age and it was their first time being in a competition,” she says.

They presented a robot that’s programmed with basic dance moves and beatboxing.

The girls designed the robot after they conducted a survey and found out that 70% of their classmates expressed interest in music and dance but didn’t have access to formal lessons.

“At first, my participants assumed that they can’t build a robot or program but they developed confidence through the workshop,” she says.

“When they finally develop a sense of ownership towards their work, it makes me really proud,” says Nabihah.