Procter & Gamble chief brand officer Marc Pritchard displaying the 'Charmin Forever Roll', a giant roll of toilet paper which is the current solution until the prototype Charmin RollBot, (blue in front) becomes available. However the company said the robot won’t be for sale and was just an example of what’s possible. — AFP

LAS VEGAS: Flying taxis and a robot that can fetch toilet paper when you're stranded on the loo were among the technologies showcased this week at the annual CES gadget show in Las Vegas.

The annual technology conference is the place for big brands and startups alike to unveil their products and services for the coming year, though larger companies such as Apple, Google and Microsoft typically hold their own announcement events. Streaming services and surveillance technologies are among the hot topics. The show formally opens Jan 7 following two days of media previews.

Here are some highlights:

Uber and Hyundai are teaming up to build a fleet of flying taxis.

Uber, the ride-hailing giant, said its four-passenger "Uber Air Taxi” will initially be piloted, but over time will become autonomous. Uber says it wants to conduct flight demonstrations in 2020 and make such vehicles commercially available in 2023. The goal is to help riders breeze over traffic in shared air taxis between suburbs and cities and eventually within cities. Uber plans to launch the aircraft in Dallas, Los Angeles and Melbourne, Australia. The air taxis, which look like a cross between a helicopter and a small airplane, will be all-electric.

While Uber has been working on the air taxi concept for years, Hyundai brings to the project a company with experience manufacturing cars on a global scale.

The companies said Hyundai will produce and deploy the vehicles while Uber provides airspace support services and connections to ground transportation. Uber will not own the air taxis, but the aircraft will be permitted to operate as part of Uber’s transportation network.

Robot for the loo

Charmin wants to solve a familiar feeling: being stranded on the toilet with an empty toilet paper roll.

Its solution: a two-wheeled robot that can fetch a fresh roll. The robot, around 6in tall, has the face of a bear – like the cartoon ones in Charmin’s commercials – and toilet paper sitting on top. 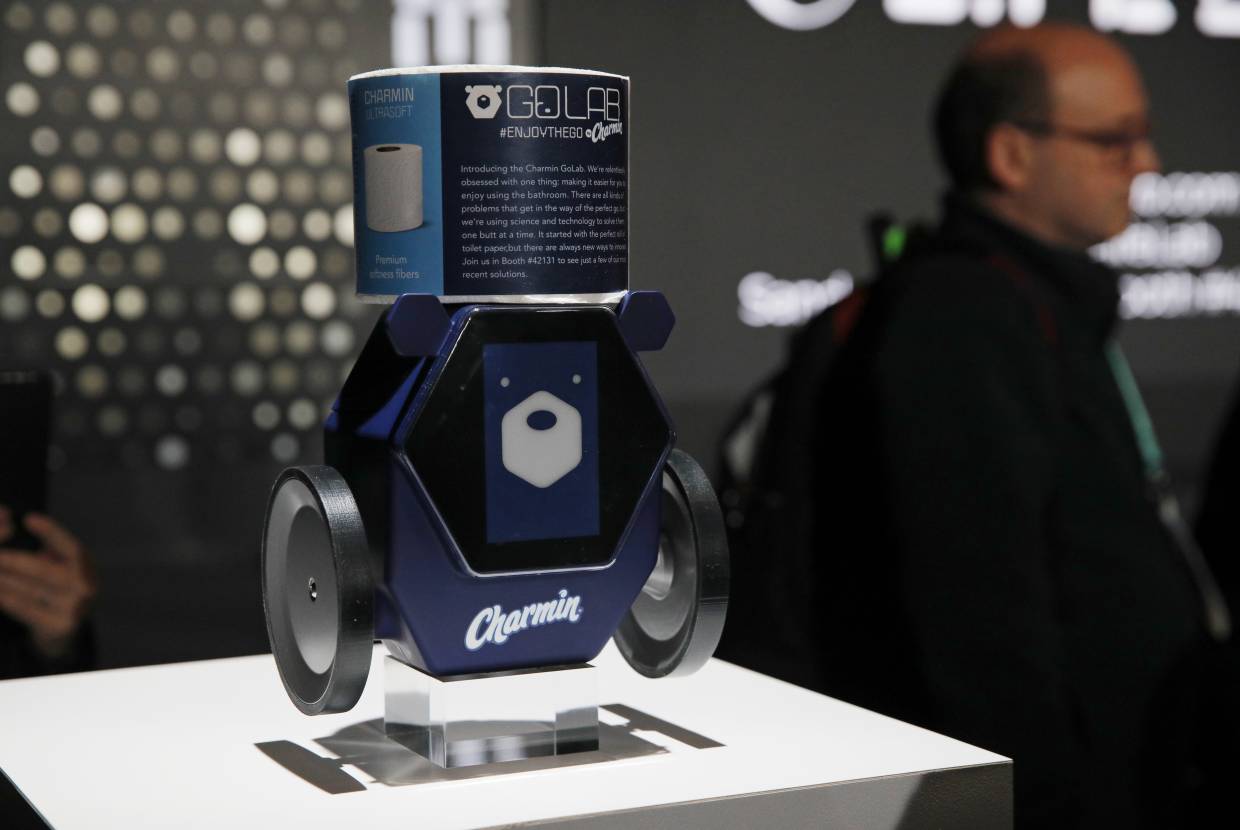 The Charmin RollBot can fetch a fresh roll of toilet paper but won't be going on sale anytime soon. — AP

But don’t expect it to roll to your bathroom anytime soon. Procter & Gamble, the company that owns Charmin, said the robot won’t be for sale and was just an example of what’s possible.

The company didn’t have a working robot available at a press conference Sunday, though executives say one will be demonstrated when the show floor opens Tuesday.

New sensors promise to stop water leaks before they ruin your home.

Monitors from Alarm.com and Flo Technologies connect to homes’ water lines and track usage. If the systems sense more water than usual is flowing through the pipes, they send an alert through their apps – after all, it could just be a long shower. But if something really seems off kilter, the monitors will automatically shut off water. The Alarm.com water management smart water valve is shown with the app at the CES Unveiled media preview event in Las Vegas. — AP

Flo used CES to launch its newest sensor, a raindrop-shaped device that looks like a smoke alarm and can detect any water or moisture when attached to toilets, washers or other leak-prone areas. Each detector costs US$50 (RM205).

Another option, Phyn, makes a US$299 (RM1,224) device that hooks up to the pipes under a sink and measures changes in water pressure.

What are your grandparents up to? Startups are pitching a way to keep an eye on the elderly from afar.

The new sensors can tell if a loved one has moved around and eaten – for instance, by detecting when the fridge is opened.

The efforts come as the US government expects adults over 65 to outnumber children for the first time by 2034. 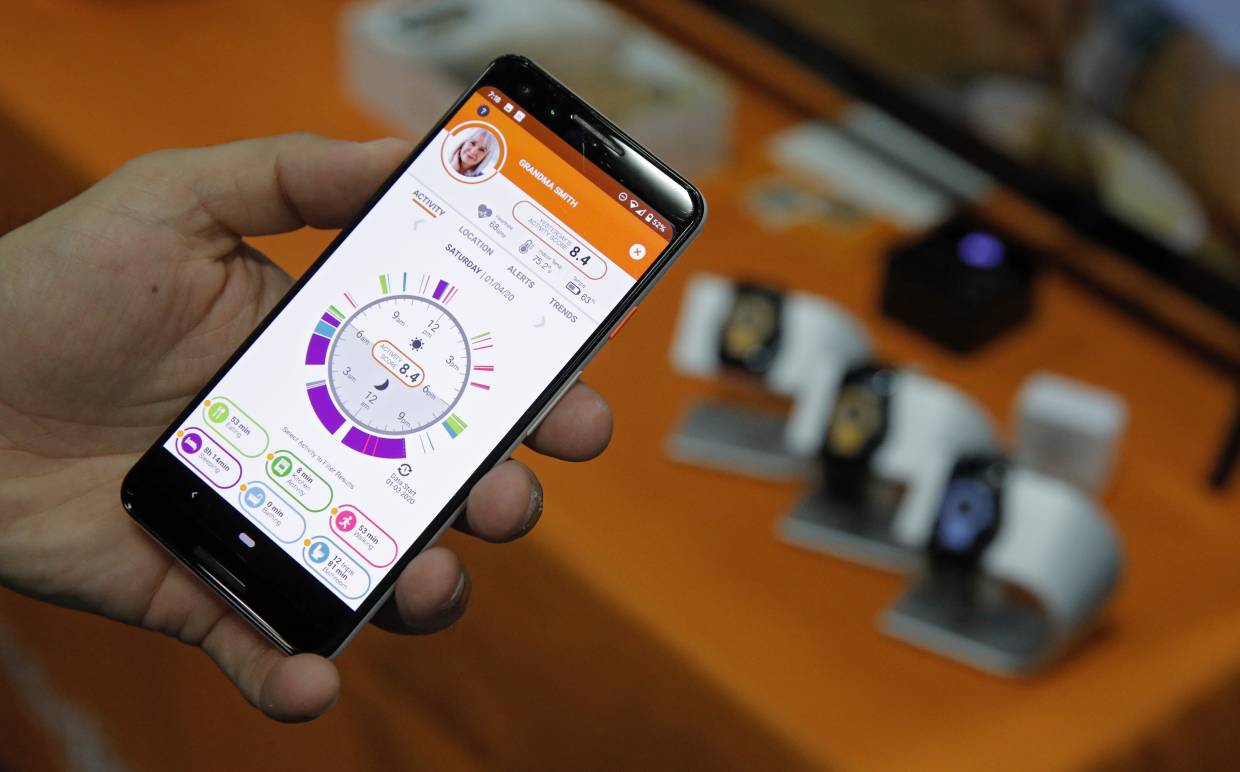 The app for the CarePredict Tempo Series 3 on display at the CarePredict booth during CES. The wearable device for seniors detects changes in the senior's activity and can alert caregivers and family. — AP

"We want to enable loved ones to live on their own,” said Ryan Herd, founder of Caregiver Smart Solutions.

Caregiver's sensors tracks the elderly through motion detection, though the product can also tell if someone has showered by measuring humidity. Another company, CarePredict, has a wrist-worn device that can detect falls and alert caregivers. It also tracks how much the person has moved around and what rooms they’re spending most of their time in. 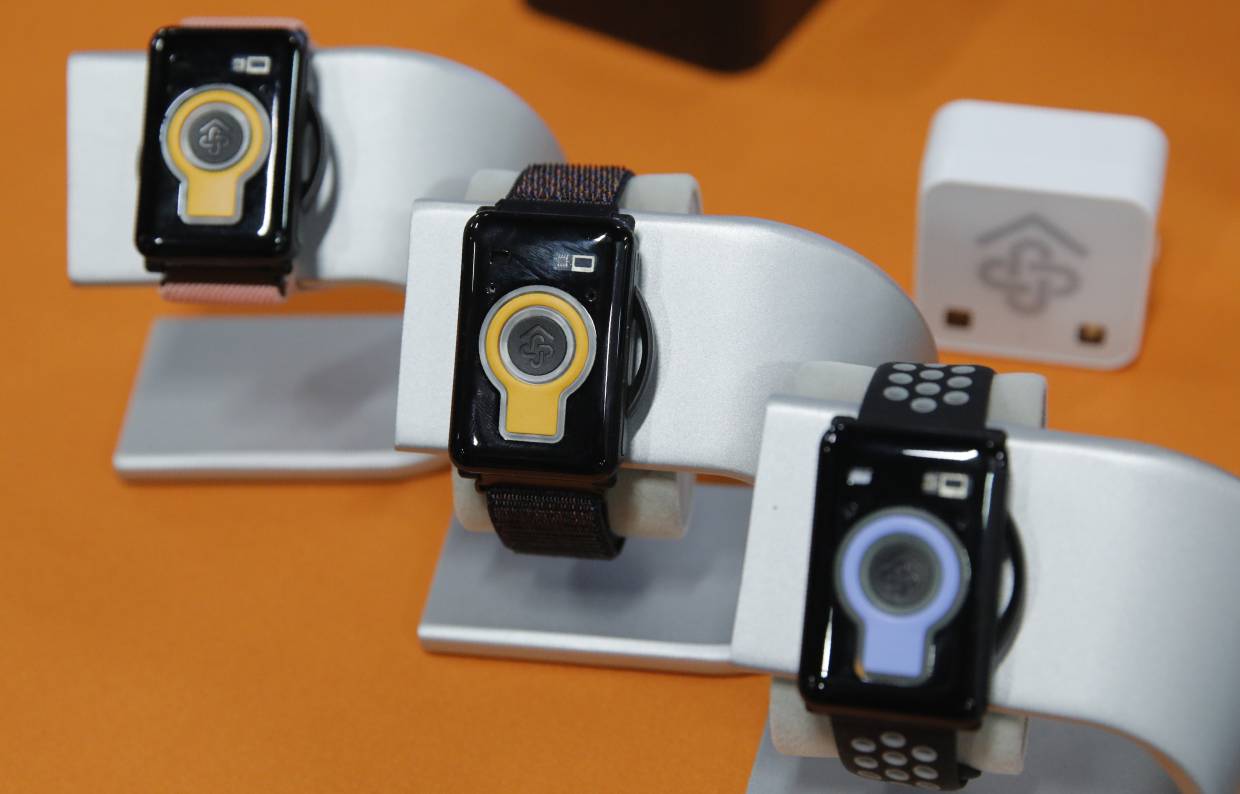 The CarePredict Tempo Series 3 on display at the CarePredict booth during CES. The wearable device for seniors detects changes in the senior's activity and can alert caregivers and family via an app. — AP

Neither company uses cameras, so you'll need something else if you want to peer into your grandparents' homes. Just keep in mind that if you can check video on an app, so might a skilled hacker.

Gadgets for your ear

Nearly 67 million wireless earbuds are expected to be sold this year, according to projections by organisers of this week's CES gadget show in Las Vegas. That’s up 35% from 2019, making it one of the fastest-growing categories in consumer tech.

According to the organisers, the Consumer Technology Association, much of the growth will come from Apple’s AirPods and Samsung’s Galaxy Buds, both of which play music and take calls without any wires. But others are vying for your ear canal, too. Amazon started selling its own buds late last year, and Microsoft plans to have one in 2020. 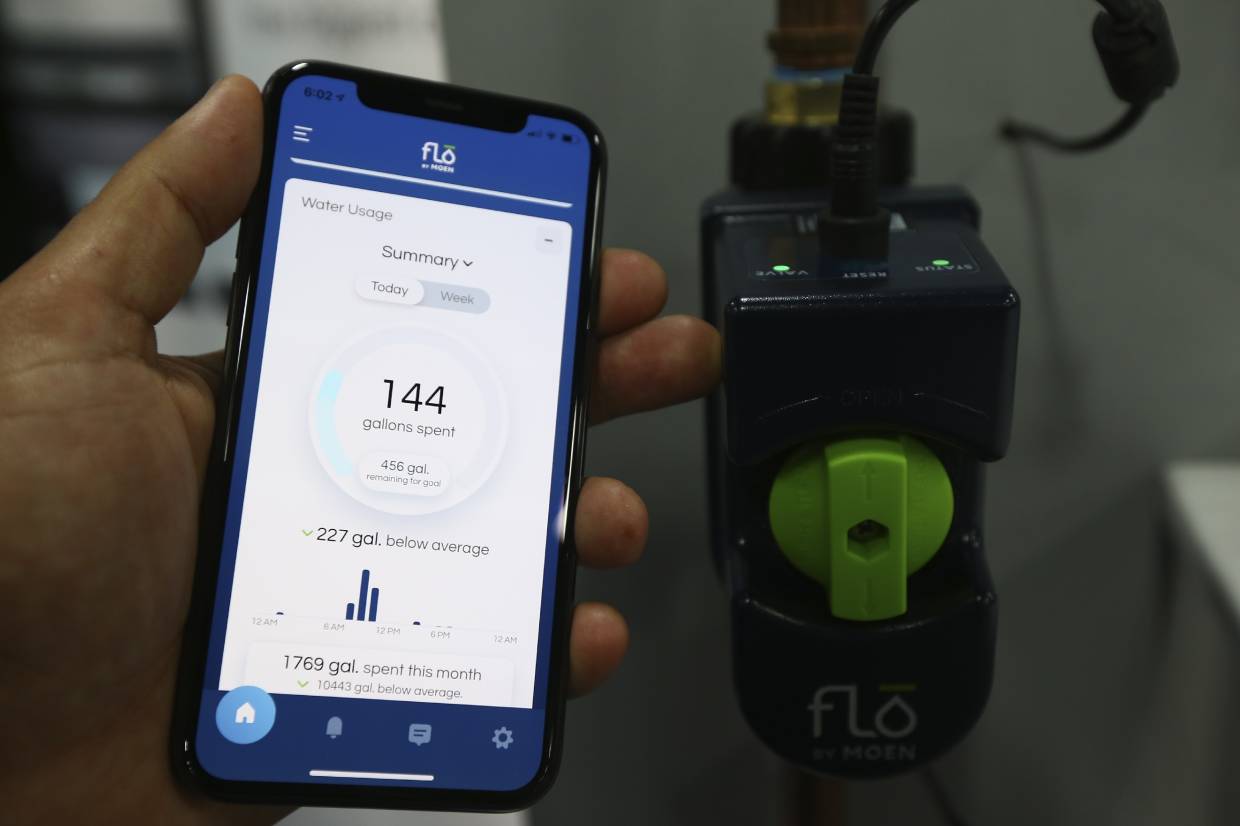 Also popular: smartwatches, fitness trackers and other devices that track and monitor your health. The CTA expects 64 million health devices to be sold this year, the first time the group has counted the category.

Smartphones and TVs will see slower growth. Both are expected to rise just 2%.

Overall, revenue in the US consumer tech industry is expected to grow 4% to US$422bil (RM1.72tril), the CTA said. But the group warned that its numbers could change significantly if the trade war with China escalates or if tariffs are expanded. Much of the world's electronics are put together in China, and the CTA has said that steeper tariffs could hurt the industry by making gadgets more expensive for consumers. – AP