A number of films and TV shows have highlighted various aspects of technology, such as social media and videogames, as a sinister element that preys on people. — 123rf.com

A whole three decades ago, the 1984 flick The Terminator introduced the then novel idea of an artificial intelligence (AI) program that could become sentient and go rogue, to devastating effect.

The military defence network AI known as Skynet eventually came to the conclusion that humanity was the source of all the world’s ills and ended up launching a nuclear attack that would kill billions of people, an apocalyptic event that became known in the movie franchise as Judgement Day.

Since then, The Terminator franchise has, for better or worse, contributed to our existential dread about technology – namely the fear that something developed to benefit mankind, such as robots with built-in AI, could become too sophisticated for our own good and eventually turn on the human race.

The film and television industry has also played on this paranoia with a number of tech horror releases or productions that focus on tech as something to be feared.

If you’re someone who never felt the need to tape over the webcam on your laptop or personal computer, then here’s a selection of tech horror productions for Halloween that will make you want to think again. Where is the block user function in Unfriended?!

The consequences of online bullying takes a gruesome and nightmarish turn in this film. Unfriended centres on a group of friends chatting online with each other on one fateful, or should we say frightful, night. The gang uses the occasion to remember Laura Barns, a friend who committed suicide after someone uploaded a video of her passing out and defecating at a party.

The video went viral but no one admits to uploading the damaging video.

Then a stranger joins in on the group’s chat session and threatens to announce everyone’s dirty little secret on social media (think of everything from sexual harassment to drug abuse) until someone fesses up for the viral video. Yes, someone in the gang who is a so-called friend to Laura is also the person behind the viral video. In the stand-alone sequel Unfriended: Dark Web, a man learns the hard way that purchasing a laptop at a ridiculously low price from an unverified seller could result in a chaotic night, when his friends and loved ones are targeted by dangerous strangers. This is also because the laptop he got was stolen.

What’s worse is that it contained material belonging to a nefarious group that broadcasts videos of gruesome murders to paying customers on the dark web. The man tries to give the laptop back to its rightful owner but it’s too late. 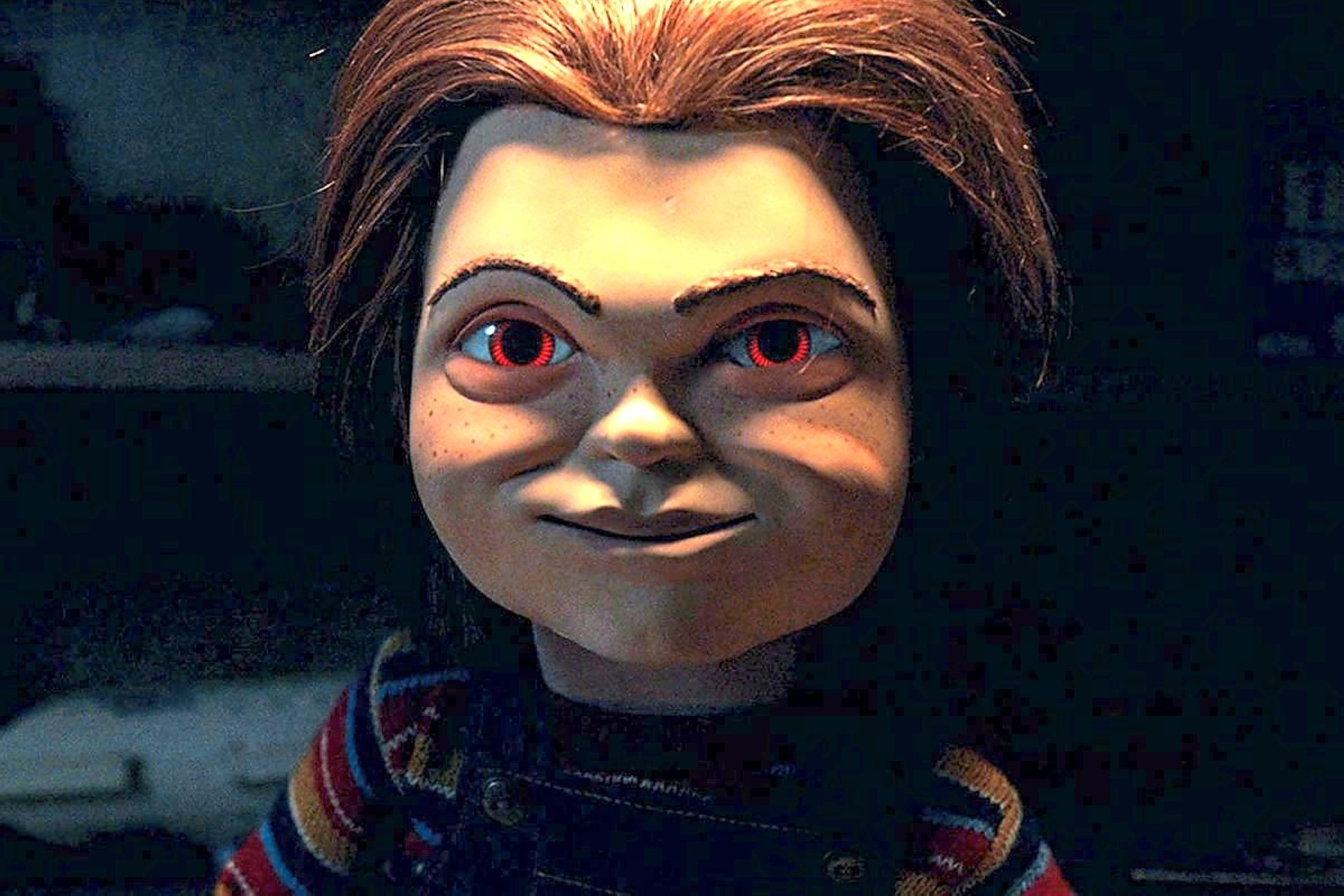 Chucky, the iconic killer doll from the 80’s movie franchise, has been given a makeover to keep up with the times.

In the new Child’s Play, Chucky is part of a line-up of high-tech Buddi dolls that are developed to be lifelong companions. It can interact with owners by learning and acting accordingly based on the surroundings.

Everything was fine until one disgruntled factory worker, who was chided for not putting in enough hours, decided to disable safety protocols on one doll. After packing the doll for delivery, the factory worker commits suicide.

Andy, a 13-year-old boy with hearing difficulties, ends up being the doll’s new owner. The doll, now called Chucky, starts displaying violent behaviour after watching a horror movie and uses its murderous skills on anyone it feels is harming Andy. It kills Andy’s cat before going after his mother’s boyfriend and eventually, everyone else.

Chucky is also somehow capable of hacking other Buddi dolls into becoming a part of his murderous rampage. This movie is enough to put you off high-tech dolls for the rest of your life. David is desperate for answers in Searching. — AP

Do you know who your children are talking to on social media? If you don’t, you really should and this movie, told from the perspective of computer screens and other digital devices, will make you want to start keeping track of your child’s activities on social media.

When his daughter Margot goes missing, David has to retrace her steps by going through her social media accounts like Facebook, emails and chat conversations on her laptop. David then realises that a friend who Margot met through a livestreaming site may have something to do with her disappearance.

In the process of locating his daughter, David also discovers that Margot has been lying about her activities outside of school.

Searching, which was shot using devices like smartphones, drone helicopters and webcams to make viewers feel like they are following the story from their mobile devices, is a wild ride from start to finish. This South Korean found footage horror film explores the lengths that some people are willing to go to just to get viewers on social media.

Ha-Joon is a YouTuber behind the exploration channel Horror Times. After learning about how two teenage boys disappeared while exploring the abandoned and supposedly haunted Gonjiam Psychiatric Hospital, he decided to assemble his own team of six friends to check out the place. The ambitious Ha-Joon hopes to achieve one million viewers during the livestream.

At first, Ha-Joon used some fake tactics to make it seem like the place is really haunted just to reel in more viewers. However things soon begin to spiral out of control, leaving Ha-Joon to realise that maybe he shouldn’t have messed with the supernatural at Gonjiam in the first place.

This South Korean found footage horror film explores the lengths that some people are willing to go to just to get viewers on social media. Sadly, some YouTubers seem to have no issues capitalising on real life tragedies for views.

Back in 2018, YouTuber Logan Paul infamously decided to include footage of himself stumbling upon a dead body in his video while visiting the Aokigahara Forest in Japan. He was widely criticised for doing so and had to take down the video.

Countdown's events could have been avoided by just not downloading the app. — AP

There’s an app for everything these days, from ordering food to performing banking services and even tracking your menstrual cycle. But do you really need an app to tell you your time of death?

In this new Hollywood movie, a nurse finds out that her friends are downloading an app that claims to be able to predict when the user is going to die. She downloads it and her results says her time of death is in three days.

Initially dismissing the result as a joke, the nurse starts getting haunted by an entity that seems determined to make sure the prediction comes true. So now she has to figure out how to outlive her death countdown timer.

The marketing team behind this movie have actually released Countdown, an app on both Google Play Store and Apple app store with the same time of death prediction features as the one in the movie. However there is a disclaimer for users to not take the predictions seriously as results are for “entertainment purposes only”. This creepy cult classic from 2001 has been described as the “gold standard of Japanese horror ghost stories” by website AV Club for the way it effectively explores the loneliness and anxiety felt by young people who can’t seem to achieve real human connection despite living in a world where connectivity is practically guaranteed through the Internet.

Set in Tokyo, the story starts with the mysterious death of Taguchi, who committed suicide while his friends were in the same room with him. One of his friends Michi finds out that prior to his death, Taguchi had been visiting a webcam site which promises to give visitors a chance to connect with the dead.

On the other side of Tokyo, a man logs on to the Internet for the first time only to be greeted with a website showing him distressing footage of people alone in their rooms. At first, it scares him but the website finds a way to slowly lure him to the dark side. 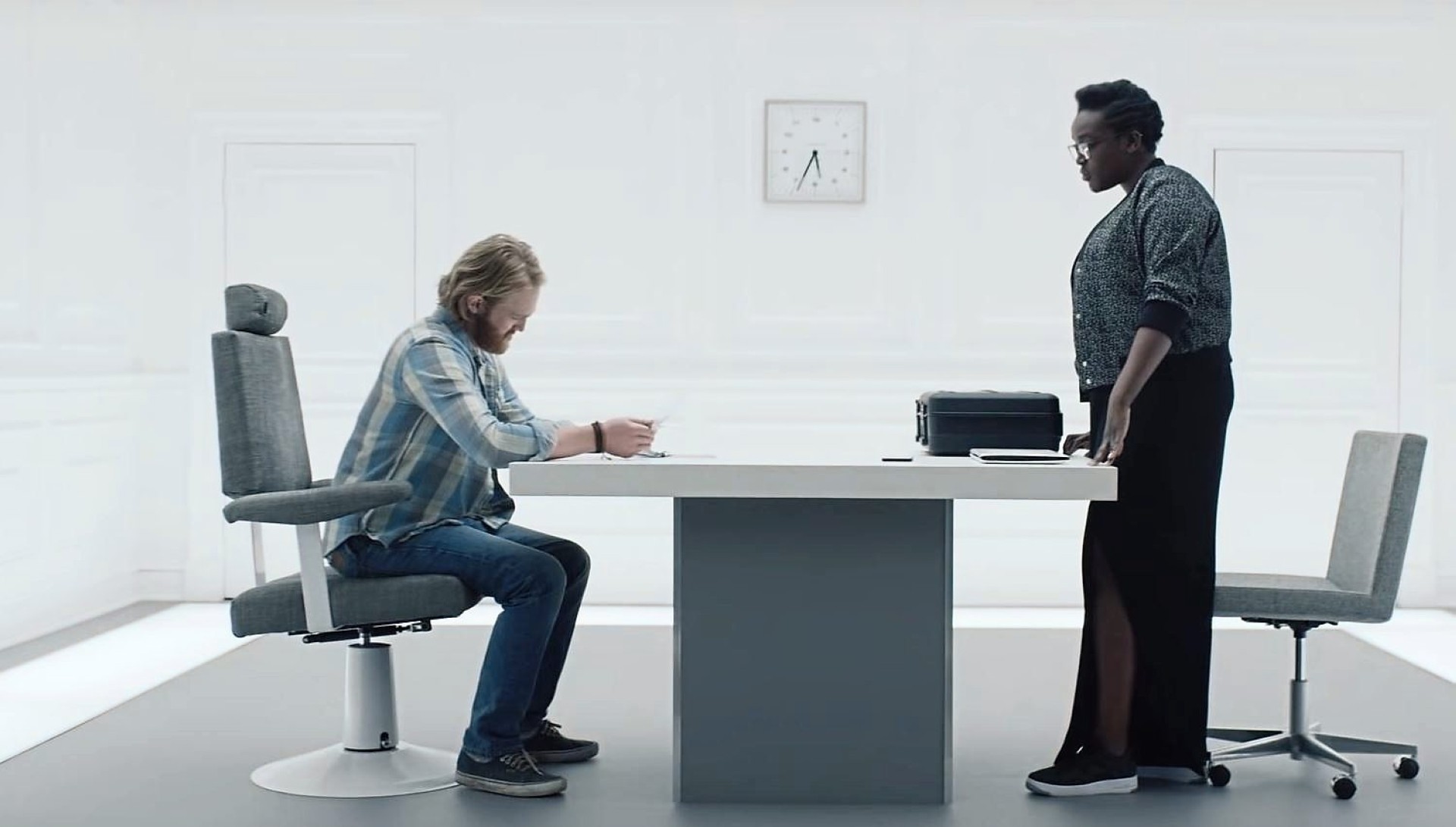 Moral of the story: never ever allow any company to implant a miniature computer in your body.

In this episode of the famed British anthology series, Cooper agrees to become the subject of new videogame experiment that uses augmented reality to heighten the gaming experience. As part of the experiment, Cooper allows the game company to implant a miniature computer at the back of his neck.

He is then brought to another location where he has to spend the night alone and where unexpected virtual simulations will pop out as part of the gaming experience in a real world setting. At first, everything seems like fun until Cooper realises that he can no longer tell simulation and reality apart. Kids, this is why you should always read the terms and conditions before agreeing to something.

Other notable Black Mirror episodes with a tech horror theme include Shut Up And Dance; where a young boy is forced to rob a bank by someone who has secretly recorded him from the webcam. Moving into non-fictional productions, Beware The Slenderman is a documentary about the stabbing of 12-year-old Payton Leutner. In May 2014, Leutner’s friends Anissa E. Weier and Morgan E. Geyser lured her into the forest where they wound up stabbing her 19 times.

After the attack, Leutner was left in the woods as Weier and Geyser believed her death was necessary as a sacrifice to the Slender Man, a fictional character which started out as a creepy meme on an Internet forum all the way back in 2009.

Thankfully, Leutner survived the attack after she crawled out of the woods and was found by a passerby. This documentary reveals what happened after Weier and Geyser were arrested and questioned by the police about their motivation for the stabbing. Variety noted how the documentary underlines the dangerous influence that the Internet may have on impressionable young minds.

The Slender Man meme has also inspired the teen horror movie Slender Man, released in 2018. A group of friends get together to raise the Slender Man and end up being haunted by a malevolent force. Kids, maybe just stick to doing the Harlem Shake in real life. 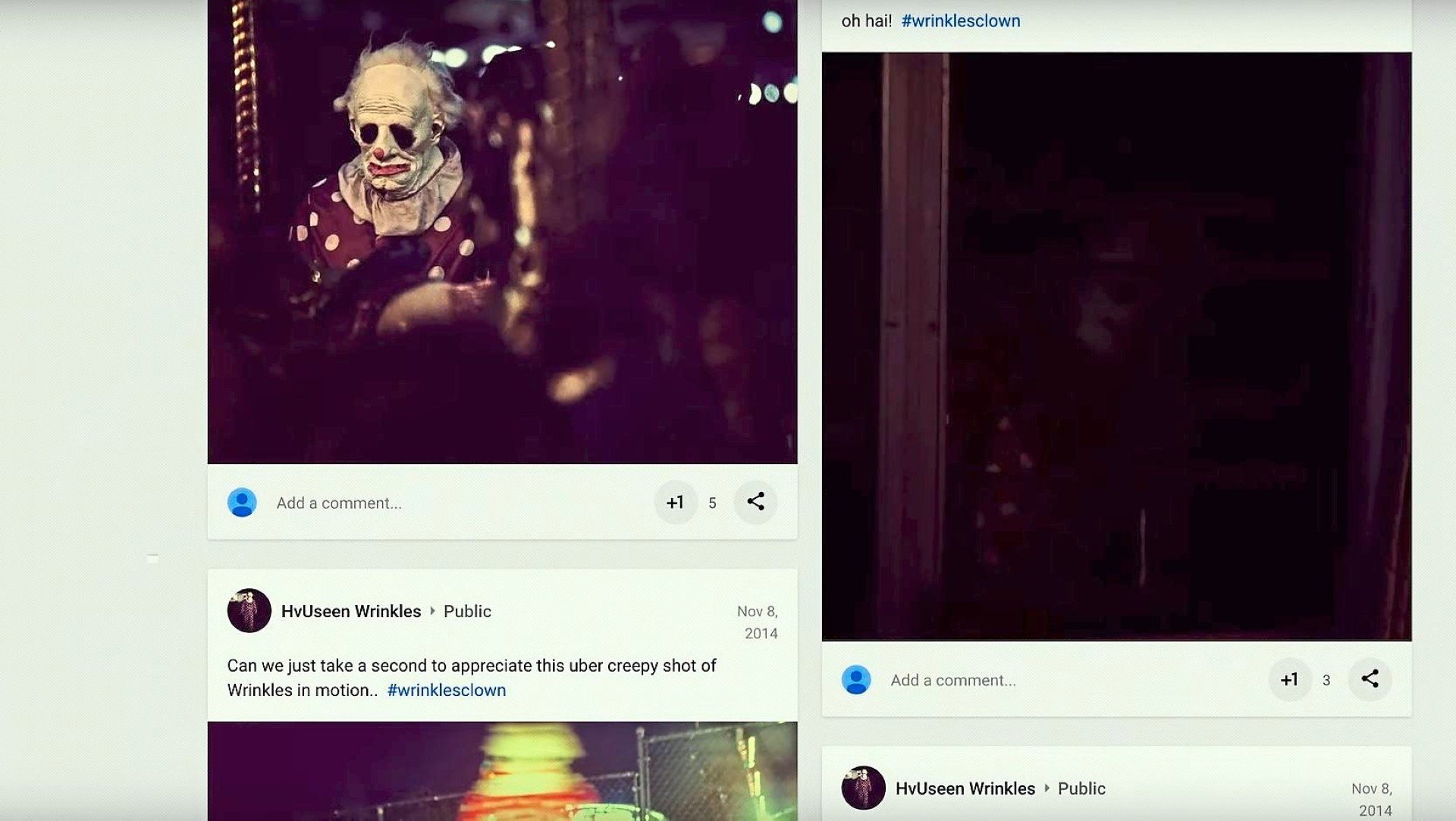 What kind of sick parents would hire a demented clown to scare a child straight? — Magnolia Pictures & Magnet Releasing/YouTube

Remember how your parents used to tell you stories about a boogeyman who would come and take you away if you misbehave? This documentary explores the person behind Wrinkles the Clown, an entertainer based in Florida who advertised his services as someone that parents can hire to scare their badly-behaved children.

Wrinkles first became known when a viral video posted in 2014, taken from security camera footage, showed him emerging from under a sleeping girl’s bed. The girl’s parents were behind the setup, as they wanted to use the footage to scare her in the future.

Before the truth about Wrinkles the Clown was revealed, some kids on social media spooked themselves by recording his presence around town and even attempted to contact him.

It’s interesting to see how some modern day parents are now resorting to technology as way to conjure the boogeyman in real life. The way social media platforms like YouTube helped build up Wrinkles the Clown’s scary persona in the minds of young users should tell us that the Internet can have a major influence on children’s thinking.

Perhaps what we should really be thinking about is how the real boogeyman could in fact be the Internet itself.