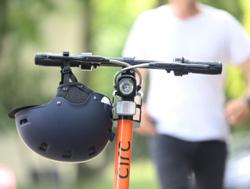 Riders testing the Beam eScooter sharing service at the launch last year. However, the service doesn’t provide helmets at the moment.

Shared electric scooter (eScooter) services are becoming more common in many countries but the buzz about the new mode of transportation is somewhat diminished by reports of accidents.

An investigation by US non-profit organisation Consumer Reports found that between late 2017 and early 2019 more than 1,500 people across the United States have been injured in eScooter related crashes.Its report was based on checks with over 100 hospitals and five agencies like the police in 47 cities.

Doctors stated that they treated the eScooter accident victims for concussions, nasal fractures and bilateral forearm fractures, with some requiring surgery. 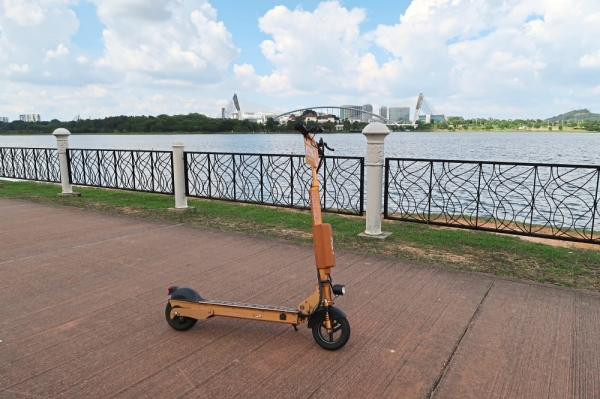 Neuron eScooters are available at various locations in Cyberjaya, and cost 20 sen a minute with an initial fee of RM1. — Neuron

Accidents involving eScooter services have yet to make headlines in Malaysia but that’s probably because they are relatively new.

Two companies – Neuron Mobility and Beam – only started offering the zippy two-wheelers for rent in cities around the Klang Valley last year.

Neuron Mobility, a Singapore-based company, is taking the best practices from its service in the island nation and applying them in Malaysia.

And Neuron’s most important safety feature? A speed cap on the vehicles. Wang says Neuron caps the speed of its eScooters at 15kph and is looking at making it even lower for new riders. — SHAARI CHEMAT/The Star

He said the speed of the company’s eScooters in Malaysia is capped at 15kph (kilometres per hour), making them about three times faster than walking or about the same speed as running.

“We find 15kph a relatively low speed, but we are looking into variable speed controls to make the cap even lower for new riders so they can familiarise themselves with the eScooters and be more conscientious when starting out,” he said.

In addition to capping the speed, he recommended riders to stick to pedestrian or cycling lanes which are generally safer than roads.

Asked if eScooters should be sharing the same path with slower-moving pedestrians, Wang said there was no clear regulation in most countries and reiterated that the eScooters did not move that much faster than people on foot.

Beam, meanwhile, has its eScooters capped at 20kph. Beam corporate affairs vice-president Christopher Hilton said the company does not want to cap the speed excessively, preferring the community to decide. Hilton says there is a need for the company to build relationships with cities to figure out how eScooters will fit in the transport system. — LOW LAY PHON/The Star

As for letting eScooters travel alongside pedestrians, he said there isn’t an ideal solution for all countries, and sometimes different cities in a country have different rules.

France, for example, is planning to ban eScooters from footpaths but will allow them to travel at faster speeds on bike routes from September.

“We’re seeing a need to build relationships with cities. There’s a learning curve on where new forms of transport fit in, we have to operate within the bounds of local regulations,” he said.

Both company heads agree that there is a need to educate customers and relevant players about how eScooters fit in the transport ecosystem as they were never considered seriously before.

They also recommend riders to wear helmets, even if regulation does not make it mandatory in some countries. Users can rent Beam’s shared eScooters using its app. It charges an initial fee of RM1.50 followed by 45sen for every minute. — LOW LAY PHON/The Star

According to Consumer Reports, a common complaint among the doctors is that in many of the accidents in the US, the riders were not wearing helmets.

Hilton noted that it was a challenge to get riders to use a helmet as shared eScooters were often used on the spur of the moment so customers are unlikely to be carrying one.

“We’re looking into other ways to encourage the use of helmets,” he said, adding that the company is weighing whether to incentivise users to bring their own helmets.

Even when riders take proper precautions, accidents can still happen – sometimes it’s due to plain bad luck and at other times because of irresponsible drivers on the road.

To safeguard against this, Beam announced early this month that it would offer personal accident insurance for customers in Malaysia, Singapore, Australia and New Zealand, with plans to insure customers in South Korea and Taiwan in the next few months.

According to Beam’s summary of benefits and claims guide for Malaysian customers, riders are covered for accidental death, disablement, and injuries like fractured bones or busted teeth.

The payout for accidental death is RM150,000 and for funeral expenses it’s RM15,000, while permanent disablement goes up to RM150,000 depending on the injury.For less severe accidents, the payout for medical expenses is up to RM6,000, up to RM3,000 for fractured bones, and RM750 per tooth lost.

In case you are mugged, Beam will also cover “loss of or damage to personal belongings due to assault” with a payout of up to RM15,000.

However, the policy does not cover riders if the mishap results from intentional self-injury, suicide, reckless misconduct or criminal act. The coverage will also be nullified if any users take part in a riot. Hilton said riders should keep in mind that having insurance doesn’t mean they should take more risks when riding.

“I don’t like looking at insurance as a safety feature, as it doesn’t make things safer, but we do think it gives some peace of mind,” he said.

He added that while regulators do not require insurance yet, Beam believes eScooter services should offer it.

Neuron said it also provides personal accident insurance coverage, adding that, “All Neuron riders are covered under our insurance policy across all our operational cities.”

Both Beam and Neuron also have general liability coverage in the event their services are at fault for a mishap.

However, when asked what would happen if the rider is the one that caused an accident, Hilton was unable to say if the coverage would come from personal accident or general liability insurance.

He said it will be evaluated on a “case to case basis”.

“Knock on wood, so far no accidents have been reported in Malaysia. We do realise that as the number of trips increase, so will the chances of an accident,” he said. 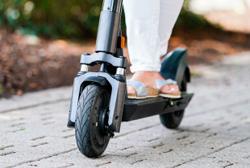