The sun is shining over a vineyard in the Fronton region of southwestern France, where wine-growing began in Roman times. The only sound is the buzzing of a distant tractor.

That’s about to be disrupted by a flying robot.

Nikola Nemcova, a former surveyor, walks through the vine stalks carrying a large backpack. She pulls out what looks like three curved pieces of Styrofoam, clips them together, checks the wind direction and throws the finished product into the air with a boomerang toss. The white drone, looking like a cross between a spaceship and a seagull, reaches 500 feet in a few seconds, emitting a loud hum all the while.

"You have to check for obstacles on the ground and scan the sky for potential hazards,” said Nemcova, who has been working for French drone maker Delair for a year and a half. "Helicopters and drones don’t mix well.”

While the wine-making region of Fronton can’t rival Bordeaux’s chateaus, its producers are at the forefront of experiments with digital tools you’d typically find at Amazon. Winemakers are flying sophisticated drones laden with custom software that lets them monitor plots for sick plants, predict output and map vineyards down to the size of a grape.

Delair has worked with winemakers in the Minervois and Gaillac regions, including on an experiment to combat a phytoplasma disease. Cognac maker Hennessy has used Delair's technology as well.

Consumer demand for drones is slacking off and air delivery of packages is still a long way off. But winemakers are only one group-along with farmers, miners, construction companies, power utilities and rail operators-that increasingly are using drones to gather information faster and more precisely than humans can on the ground. "This isn’t your everyday toy drone. These are big, stable, sophisticated flying robots for business,” said Michael de Lagarde, chief executive officer of Delair, a startup based near Toulouse that makes not just the aircraft but data-analysis software for them. "Our clients don’t care for drone fun. They measure cost, return on investment and performance.”

Unlike consumers, businesses are prepared to pay the hefty price tag required for quick-precision measuring, and artificial intelligence software that will help crunch through the data. They want sophisticated machines that will self-navigate for miles along a set flight path, and are prepared to cope with strict regulation, including the need to train dedicated pilots.

Delair’s basic model, the one Nemcova catapulted into the sky, is about 3.6 feet wide, weighs 6.6 pounds and costs some €15,000 (RM70,274). It takes only a minute or so to fly over half a square-mile of vines, snapping detailed photos through the camera located on its belly. Then it manoeuvres an elegant bird-like landing in a clearing.

The captured photos, once assembled by Delair software, turn into a highly realistic 3D rendering: a videogame-like universe, or a Google Maps on steroids. The detail of the vine on the virtual map goes down to smaller than half an inch. By studying it, winemakers figure out answers to questions such as how much fertiliser to spray based on the abundance of foliage.

More expensive models cost up to €200,000 (RM937,020) and pack on a variety of types of radar. Also offered: night vision. That’s not much use in a vineyard and would be more typically employed for surveillance. Plus, that drone is 25 pounds heavier and needs a catapult to launch.

It’s not a coincidence that drone advances are happening in this region. Delair’s neighbours near Toulouse, about 40 miles from the vineyard, include plane-maker Latecoere and, about a mile away, European giant Airbus. Toulouse is home to a talent pool that’s helped local players emerge. Because France was one of the first to regulate commercial drone use in 2012, years ahead of the US, expertise has flourished and attracted the likes of Amazon and Nasa. The business of enterprise drones is split between hardware makers that design and build the aircraft, developers of software used to crunch the collected data and service providers that hire pilots and operate machines. Most companies handle only a part of the chain, and competition is fierce, especially in hardware. The market for businesses that’ll devote tens of thousands of euros to buy a fleet of drones and train a team of in-house pilots is narrow.

"We use the hardware as a Trojan horse to deploy our software. Today the hardware part involves drones, but down the line it could be any other connected object that collects data,” Lagarde said. Delair two years ago struck a deal to become one of Intel Corp’s technology providers, licensing its data-crunching software to the giant, and sold shares to Intel as well. 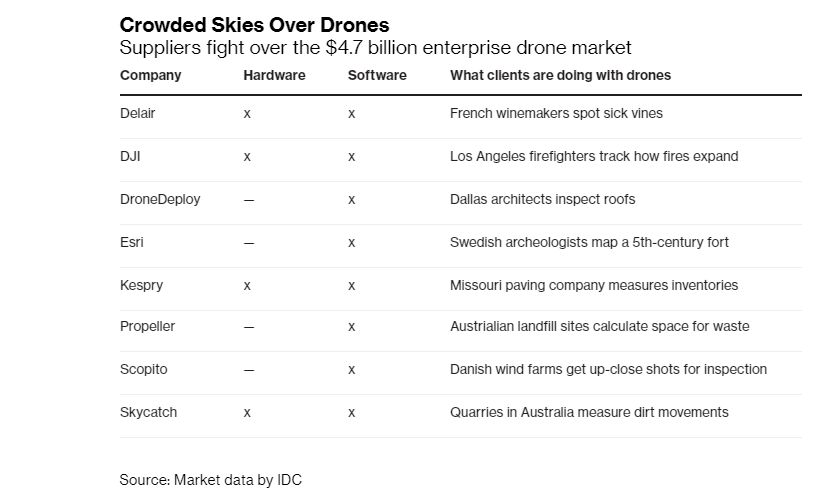 For railroads and utilities, the technology is used mostly for surveillance over train tracks and high-voltage power lines. Construction and mining are also among sectors deploying fleets of near-military-grade flying robots packed with cameras and sensors to measure piles of materials, monitor progress on a building site or evaluate safety.

Nemcova, who earned her pilots’ license in the Czech Republic in 2015, jumped from surveying to drones "as a way to do the same line of work better and much faster”, she said as she took apart the curved wings and stowed away the body of the aircraft, its on-board memory now packed with data. "Drones are the future.” – Bloomberg