As Deacon, players venture through a wilderness full of dangers from Freakers as well as as marauders and cultists.

Days Gone is defined by a number. It’s the time that the protagonist, Deacon St. John, has been apart from his wife – 730 days and counting.

The game begins with that essential moment when he puts Sarah aboard an evacuation helicopter and stays to help his injured friend Boozer. His buddy and his spouse are in dire straits.

The world is ending as an outbreak that creates zombie-like monsters called Freakers inundates the town. Through some miracle, the bikers manage to survive for two years. The bikers manage to survive for two years on their own.

They become Drifters, freelance workers who move between Oregon settlements in a post-apocalyptic world. Deacon’s wife is presumed dead after the camp she was reportedly staying in was overrun. Days Gone is a game where most of humanity is broken and the central conflict is focused on whether survivors should hold on to the past or forget about their history and live in the present.

It’s a heavy premise for a survival-horror game. As Deacon, players venture through a wilderness full of dangers from Freakers as well as marauders and cultists. Through an uneven campaign, players follow his journey as he grapples with his past and looks for a reason to keep living.

Sony’s developers at Bend Studio do a good job at relaying that struggle and the team offers characters worth caring for. The problem is the pacing. It takes a while for Days Gone to ramp up and side quests tend to hurt that flow and sidetrack the themes. Instead of supporting the narrative, the extra missions tend to be generic and forgettable. 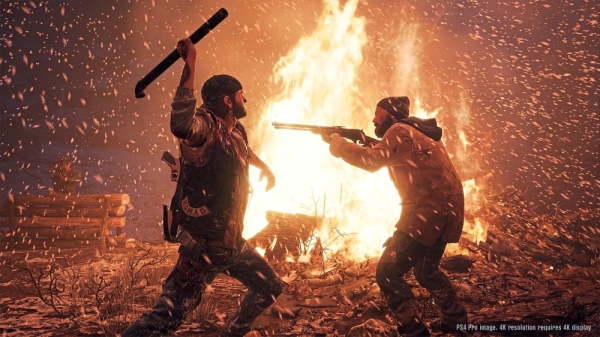 Deacon finds himself in situations where he needs to apply all three phases of combat.

On the other end, most of the main narrative missions are solid, with several buggy moments, most notably during stealth situations involving shadowy government researchers. The main missions highlight a versatile combat system, in which players can freely move between stealth, melee and long-distance tactics. It’s not perfect and it feels clunky as players switch between bombs, lures and healing times, but the system is easy to pick up as Deacon finds himself in situations where he needs to apply all three phases of combat.

At times, they’ll need to play Days Gone like Far Cry, with Deacon needing to scout and tag enemies with his binoculars before taking them out. In other moments, players will be out in the wild scavenging for scraps to keep fighting. They’ll face an overwhelming number of enemies and conserving ammo and repairing weapons that break is vital to survival.

As a game, Days Gone works best when players are just allowed to roam and create emergent moments. Bend Studio does a remarkable job of adapting the survival-horror setup to the open world. It’s a difficult feat because the genre is built on producing fear through confined spaces. Resident Evil puts players in situations where danger can lurk around corners or down hallways. Hordes create an element of unpredictability as players venture through the open world doing missions.

How do you bring that same level of anxiety to forests and farms? Bend Studios introduced hordes, which are huge packs of Freakers that roam the land at night. Centred mostly around caves, they are a writhing mass of teeth and claws that chase players who aren’t wary of their surroundings.

Hordes create an element of unpredictability as players venture through the open world doing missions. Days Gone is almost Far Cry-like in how the randomness of Freakers can create magical moments.

Players can be attacking a raider camp when Freakers, attracted to the sound, storm in and create chaos. Another moment may have players climbing up a treehouse to escape a horde who swarm below. They’ll have to figure out how to get down and survive. It’s this free-form storytelling that’s the most memorable. Days Gone works best when players have to deal with these mobs knowing that they can’t unload on them like Rambo.

It makes me wish that Bend Studio took more advantage of this rather than Deacon’s linear narrative. Days Gone works best when players have to deal with these mobs knowing that they can’t unload on them like Rambo. They have to understand the behaviour of Freakers and use it to their advantage to take out enemies or create distractions. The hordes are ultimately a force of nature, like a swarm of ants, and battling them is the best part of the game.

It’s almost enough to forget about the flaws of Days Gone. The game has its share of bugs and there’s some grinding to access the best weapons at each camp, but when the title finds its groove, it’s remarkably fun. The developers just need to hone the design and storytelling to make the experience better. – The Mercury News/Tribune News Service