Giving those with Autism Spectrum Disorder a voice through tech

Mark is nine and has no functional speech, though vowel sounds are starting to emerge.

Diagnosed with apraxia – a motor disorder that affects his ability to form sounds – Mark can’t say words, which means he is non-verbal.

Locked in silence and unable to communicate meaningfully, he was a frustrated toddler who was unfocused, made limited eye contact and tended to whine.

But after he was diagnosed with developmental delay, his parents started getting him help. They enrolled him in therapies and followed through at home with various activities to deal with his challenges.

In recent years, Mark has been at Hatching Center in Kuala Lumpur, a special needs learning centre where he does academic studies, speech and occupational therapy, and extracurricular activities such as music and art. His mother, Ann, also reads to him diligently.But even as he improved in many areas, not having the ability to speak to express himself was frustrating Mark.

“He was getting cranky and throwing tantrums. As he got older, it got harder to tell what he wanted,” shares Ann who also noticed that his teachers and classmates were ignoring him in the normal kindergarten he went to before he enrolled in Hatching Center. The isolation affected Mark’s self-esteem and he grew disinterested in learning. 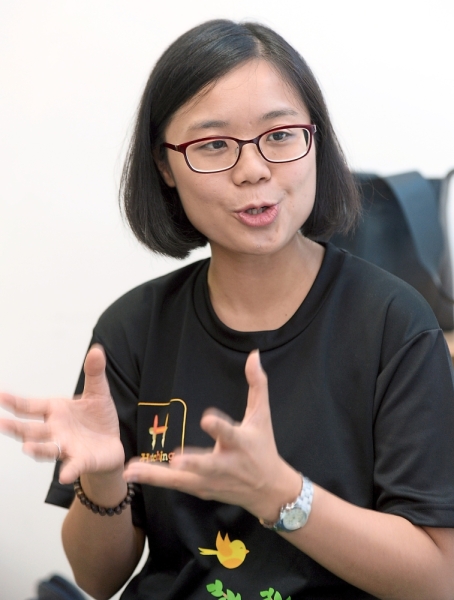 Looi says the biggest challenge in persuading families to use assistive tech is that they fear it will stop their child from speaking. — AZHAR MAHFOF/The Star

They tried Picture Exchange Communication System (PECS) which is essentially cards with pictures that he can show to indicate what he wants. But Mark didn’t take to the cards, or the idea of carrying a bulky folder around.

His paediatrician then told Mark’s parents about AAC apps that can aid his communication.

“Initially, we were reluctant to let him use it because we were worried he won’t learn to speak,” says Ann.

In fact, the biggest barrier to adopting assistive tech is that it would stem the motivation to learn speech. But studies and anecdotal accounts have shown that AAC helps rather than hinder language development.

Looi started introducing AAC apps to him on a tablet in 2017, and they are now actively using Proloquo2go, a highly rated AAC app.Already adept at navigating his way around a tablet, Mark started by tapping on pictures to communicate.

But he is literate and has since moved on to typing words and even sentences. It turns out that Mark knows a lot of words, and has become a fast typist. He often reaches for Looi’s hands for guidance when he is unsure of how to say something or spell a word. Mark would take Looi’s hand to guide him whenever he is at a loss for the words to express himself. — AZHAR MAHFOF/The Star

“He picked up on Proloquo2go quickly, which surprised us. At first we were aiming for him to do 100 words but he has surpassed that,” says Looi, who also points out that Mark has been learning phonics and spelling for many years before that, and so he had the competencies to use his AAC app.

Mark now uses Proloquo2go to type out what he wants to say, especially in school.

“We could see his confidence growing. He is happier and more curious now, eager to learn words and spelling. With this app, he is also trying to socialise with his friends in school, it allows him to be part of the classroom,” says Looi.

More importantly, he is able to say what he wants, says Ann.

Mark is one of the few Malaysians with developmental delays such as Autism Spectrum Disorder (ASD) who has benefited from using assistive tech.

Although there is an increase in usage of tech as a tool in therapy, access is still limited due to high cost and a lack of awareness of its potential.

In celebrating World Autism Awareness Day on April 2, United Nations Secretary-General Antonio Guterres calls for affordable assistive technologies to help people with autism live independent lives and “exercise their rights and fundamental freedoms”.Gutterres’ call is also a recognition of the role tech can play in giving non-verbal individuals with ASD a voice.

Children today are “native speakers” of technology, and the devices are very much a part of their environment.

From touchscreen phones to tablets, mobile devices have never been more user friendly, available and affordable. Handheld devices are also portable and more acceptable to peers.

Mark learnt to use a tablet when he was two years old to watch videos on YouTube, play games and learn. So using an AAC app on his tablet was way easier for him to adopt than working with visual cards.

But even though Mark has done well with assistive tech, and there has been other success stories, a device installed with a best-selling app is unfortunately not a magic bullet that will quickly enable a person with ASD to communicate and develop language skills.

“Parents seem more excited about using technology, and it seems more acceptable to the child.

“Parents might think it’s cooler to carry an iPad than a bulky PECS folder, and they sometimes get blindsided by the fact that their child is using technology. They think it’s better than low tech AAC. But the point is to introduce what’s most beneficial for the child to get his message across and to reduce his frustrations,” says Dr Susheel Kaur Dhillion, a senior lecturer and speech language pathologist at Universiti Kebangsaan Malaysia’s Faculty of Health Sciences. Whatever the AAC tool used, ultimately the results will depend on putting in the work involved, such as engaging with the child, prompting and waiting for his response, and creating opportunities for communication.

“Tech gives us more options but it is not really a game changer. The most important thing is getting the parents onboard ... getting the family to understand that this is for the child’s communication, to understand it’s good for your child and it’s going to help your child,” says Dr Susheel.

The biggest challenge, she says, is for families to use the device and app consistently and effectively to lead to a positive outcome. It requires conviction and commitment to invest the time and effort needed to help a child with ASD use his AAC tool because it has to be an ongoing daily process.

With thousands of AAC and other communication apps currently available, the first task for parents and therapists is to choose a suitable app according to their child’s needs.

“We need to look at different features in an app. Most apps are in English, so if that’s not the family’s first language, we need to look for an app with a feature to record our own voice.

“Families will also need to be able to upload their own photos because some things that the child likes, such as mee goreng, will not be in the app,” shares Dr Susheel who has been using AAC apps with her clients since 2012.

She and her colleagues have tested and tried out many different apps as they need to make sure the features are suitable for their clients.

“We can’t ask parents to purchase apps until we are sure the child can use it. Often, we use Lite versions as they are cheaper, or we look for free apps,” says Dr Susheel who adds that there is immense potential in assistive technology that has not been fully explored.Last year, Dr Susheel and her team partnered with the United States’ Nika Project, an all-

volunteer group made up of speech therapists, special education teachers, and technology specialists that donate their time to carry out the mission of “spreading the power of technology in the world of special education around the globe”.The Nika project volunteers trained local special needs teachers and speech therapy students in using assistive tech, and donated devices to three special needs centres in Malaysia.

Accessibility and affordability of devices and apps are also another factor to consider, Dr Susheel points out.

There is a wide range of apps available now, and some are even free. But Proloquo2go which is touted as one of the best AAC apps around costs about RM1,000, and another popular AAC app TouchChat costs between RM599.90 and RM1,299. But some therapists also use the Let Me Talk app, which is free.

Mark’s parents hope that the government would offer subsidies for parents to purchase assistive tech for their special needs children.

Before she recommends assistive tech to a client, Dr Susheel says she needs to assess if the family can afford to provide the child with a device solely for his use.

“The device will become the child’s voice, so he needs to have it with him all the time. If a family of six shares one device, then using tech will not be ideal,” she says. Parents need guidance in choosing the most appropriate app for their children as there is a wide range available. — GLENN GUAN/The Star

High tech AAC tools give speech therapists more options on how to help non-verbal children, but families still need to put in the hard work required to stimulate speech and communication. The ultimate goal is still to help a non-verbal person speak.

“Parents will still need to be guided by therapists. We have to teach parents how to use the app and help to programme the app.

“There are so many things that can be done within apps. We need to learn so that we can guide parents on how to use the apps. And we have to teach bit by bit, we can’t teach at one go. But families have to be onboard,” stresses Dr Susheel.

In fact, one of the challenges of using assistive tech is taking its usage beyond therapy and school settings.

Any individual using assistive tech as their “voice” will need partners and allies in the bigger community to help them learn to communicate through their AAC app.

Hence, family members will also need to learn to engage and respond appropriately, prompt the AAC user and be language models.

Mark uses his app mainly in school, but not at home. But he will occasionally use Proloquo2go to “talk” to his parents and grandmother when he can’t get his message across through non-verbal means.

“We don’t know when he will have speech but we are continuing to work on that. But in the meantime, he has an app that enables him to express himself to address his needs, exchange ideas with friends and parents, and eventually he may even be able to type out messages to send out on the phone,” says Looi.