Items, prohibited on passenger airlines, and confiscated from passengers by Transportation Security Administration (TSA) officers, is displayed at Dulles International Airport in Dulles, Va., Tuesday, March 26, 2019. The items include a guitar shaped like a semi-automatic rifle, an inert grenade, and a stun gun. (AP Photo/Cliff Owen)

WASHINGTON: David Johnston stands over a table full of peculiar items confiscated at Dulles International Airport: A glittery clutch with brass knuckles as a clasp. A perfume bottle shaped like a grenade. A rusted circular saw blade. A pocket-sized pitchfork.

None of those are quite right. Then Johnston sees it: A guitar shaped like a semi-automatic rifle. Bingo. It will do nicely for the Transportation and Security Administration’s social media accounts.

Johnston, TSA’s social media director, is following in the footsteps of Curtis “Bob” Burns, who created unlikely Internet buzz for the not-always-beloved agency by showcasing the weirdest stuff travellers pack in their carry-ons. He died suddenly in October at age 48.

Burns’ work created a model for other federal agencies. The quirky photos combined with a hefty dose of dad humour helped lure in more than a million followers on Facebook, Twitter and Instagram, who would then see important messages about the dos and don’ts of airline travel. 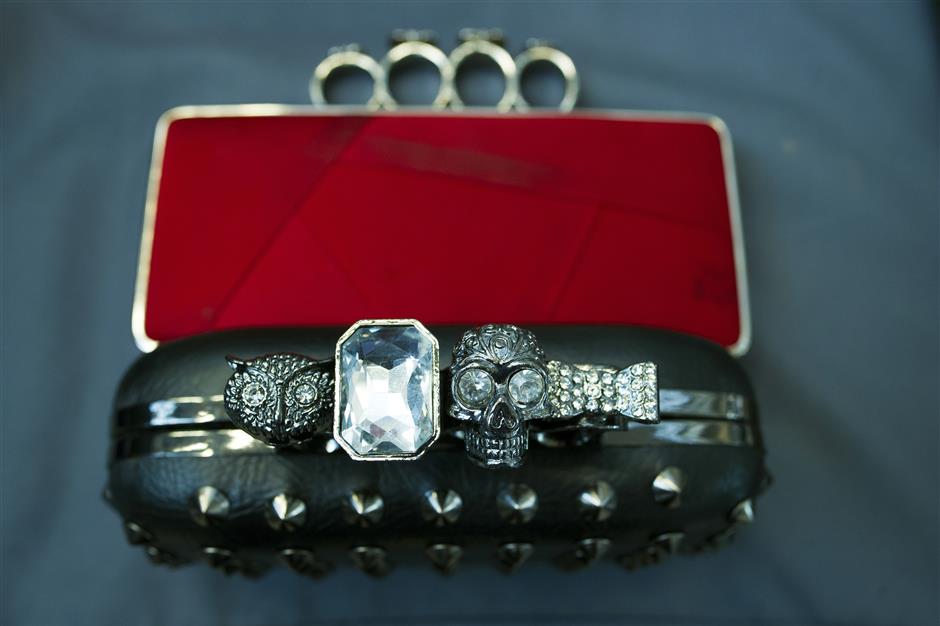 “How are we going to replace Bob? The reality is we can’t,” said Johnston. “We had a unique situation with him, but we can still be entertaining and help people as we find our way forward without him.”

On the blog, Burns shared a weekly count of firearms that TSA officers found at checkpoints nationwide. He did a summary of knives and all matter of other bizarre and sometimes scary items that travellers had stuffed into their bags, pockets, purses or briefcases.

In one Instagram post, someone tried to bring on a glove with razors for fingers and Burns (naturally) made a Nightmare on Elm Street joke. Johnston displaying a knife which was confiscated from a passenger. TSA’s social media presence has been something of a model for other federal agencies – striking a tone that's humorous, but still gives travelers informational dos and don’ts.

Johnston, who worked with Burns for about three years, and has been in government jobs for nearly a decade, has tried to keep it up all on his own, but it’s been tough.

Johnston sent out a Valentine’s Day post that showed off a throwing star, axe and double-edged dagger confiscated from a passenger’s carry-on bag. (“Safe travels, you romantic fool!”) And it was national puppy day recently, so that was an excuse for a photo of Cole, a big-eyed TSA explosives detection dog.

TSA is growing its social media staff – bringing in three more workers to expand its social media presence. The staff will continue to use fodder sent in by officers around the country, who seize all manner of unusual items people try to bring onboard. But it’s hard to find people who have both the government know-how and a sense of humour that resonates.

Johnston said the thing that made Burns’ posts so special was Burns himself. “When you look at his posts, you’re seeing a window into his soul. It really was from his heart, he was a fun, happy guy.”

Burns’ sister-in-law, Candy Creech, said he had a dry sense of humour and a hefty dose of patriotism: He had served in the Gulf War. Burns had worked in airports before taking over social media and believed there was public negativity around TSA. He wanted to change that.

“And I think he felt he could change that by communicating with people in a way that wasn’t scolding,” she said. “He was one of a kind.” 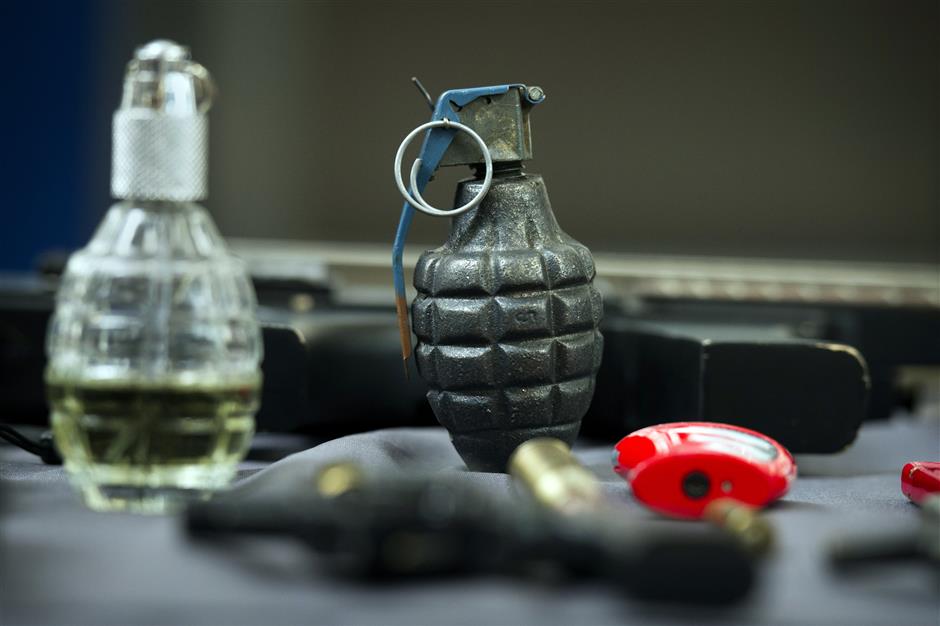 An inert hand grenade is seen along with other banned items taken from passengers at TSA checkpoints at Dulles International Airport in Dulles, Virginia.

During a TSA Facebook live, “Ask Me Anything” episode last year, Burns said the success of the account was partly due to the shock value.

“People don’t come to a government Instagram account and expert to see humour,” Burns said, “And they also don’t expect to see these crazy things that people are trying to bring on a plane.”

At Dulles, in the prohibited items section, Johnston sees a few possibilities for TSA’s YouTube series called “They Brought What?“ including a large snow globe with a big white fairy imprisoned in some kind of liquid. (It’s creepy and it has liquid, so they can highlight the liquid restrictions.)

He passes over the four pairs of nunchucks (Yawn. You can’t believe how many people bring those) and a handful of pocket knives. He stops at a large bullet from Afghanistan that has been altered to be a cigarette lighter and pen. 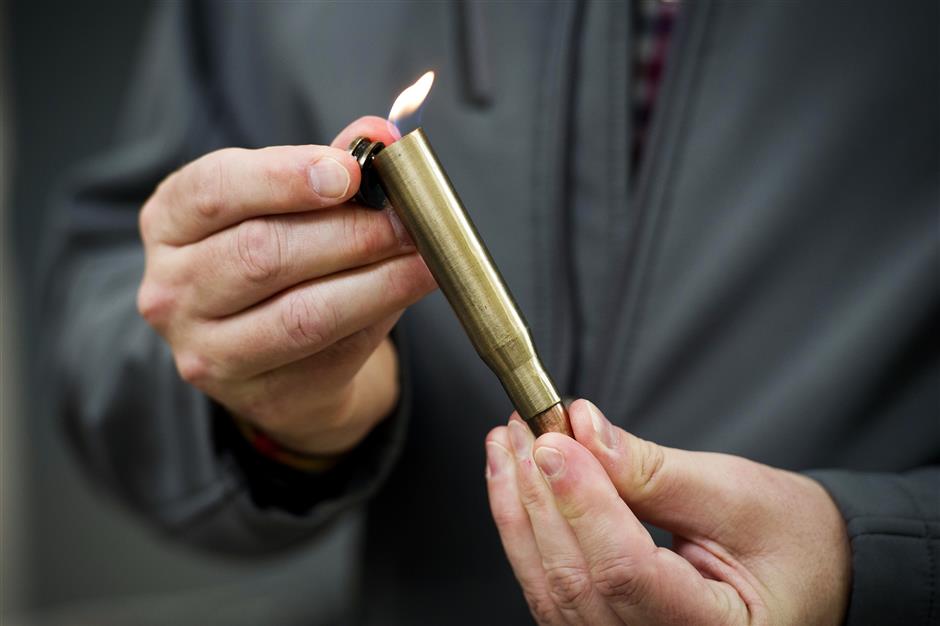 A lighter mounted inside of a bullet casing which was confiscated from a passenger at a Transportation Security Administration (TSA) checkpoint at Dulles International Airport.

“The things people think of,” he says. Turning more serious for a moment, Johnston notes the importance of showing off these items, especially to people who aren’t well-travelled.

“The bottom line is our social media pages makes travellers better informed so they have a better experience and it frees up our officers to do what they need to do – look for the bad actors,” he says. – AP