The sanctuary iPhone app will allow users to chat with astrologers -- for a price. (Dreamstime/TNS)

Any entity created on this planet comes into the world with a star chart, dominated by a sun sign, reflecting the motion of the spheres above at its moment of birth.

Facebook, for instance, is an Aquarius, while Google, Snap and Netflix are all Virgos. Microsoft and Twitter – both Aries. Amazon? Classic Cancer.

Sanctuary, a digital astrology startup backed by US$1.5mil (RM6.07mil) in venture capital, made the considered decision to launch on March 20 – the dawn of the new astrological year, when Pisces gives way to Aries in the astral cycle.

And with private equity veterans, celebrity astrologers and one of Snapchat's earliest employees on board, its investors foresee fortunes.

There's always been money to be made in cosmic guidance. The ancient king Croesus, who's credited with inventing minted money itself, gave a 500-pound lump of gold to the oracle at Delphi as tribute for good forecasts. Tycho Brahe, the Renaissance scientist whose observations of the stars laid the groundwork for Galileo's breakthroughs, made his living as a royal astrologer.

More recently, the phone psychic network behind Miss Cleo raked in hundreds of millions of dollars in the '90s, and was fined by the Federal Trade Commission for unfair business practices. Astrology.com recently told Digiday its revenues are in the "low eight figures" and growing, based mostly on ad revenue.

In 2018, Americans spent US$2.2bil (RM8.90bil) on "mystical services", according to research firm IBISWorld. And the Internet, especially social media, is awash in astrology. Influencers pose with crystals, memes about Mercury in retrograde (a supposedly inauspicious time of tumult) ripple across Instagram, and horoscopes have re-emerged as a mainstay of women's sites like the Cut, Bustle and Broadly.

"Astrology has been around for a very long time, and it really adapts to the vernacular that people are speaking," said Aliza Kelly, Sanctuary's astrologer-in-residence and a horoscope writer for Cosmopolitan magazine.

"Today, the language is technology and memes and connectivity."

The business models adapt too. Kelly leverages her media success and Instagram following to sell 60-minute phone readings for US$149 (RM603) a pop and is booked solid through early May.

Steph Koyfman, an astrologer who runs the website the Daily Hunch as a side job (her main gig is at language-learning startup Babbel), said the demand for an astrologer's interpretive skills has stayed strong since she launched the site in 2015.

In response to the stream of private messages from followers who had urgent questions to ask, Koyfman said she updated her list of services at the beginning of the year: "I'm offering a US$10 (RM41) 'Google can't help me' reading, if you just want to get a really short answer."

The IBISWorld report found that the market was split among more than 88,000 separate businesses, most of which are run by solo practitioners like Kelly and Koyfman (and most of whom are women).

The team behind Sanctuary is betting on the idea that they can become a central platform to unify this fragmented market and cater to those customers willing to pay for instant astrological gratification.

"Investors get really excited about the size of the addressable market, the growth potential, the fact that it's so fragmented, and that there's no established or well-known brand," said Ross Clark, Sanctuary's chief executive.

The app itself is built around the experience of texting: After users download Sanctuary and enter their exact time and place of birth, they get access to the kind of free astrological content common across the Web – a daily horoscope, and some background information on the more esoteric corners of the star chart, delivered in a chatty back-and-forth format.

The business model hinges upon a monthly subscription fee. For US$19.99 (RM81), users can chat with a live astrologer once a month for a 15-minute birth chart reading, during which they can ask for specific insights into their lives based on their star charts.

Right now, the company has 30 astrologers lined up for readings, who work as independent contractors, and a small back-office staff of five.

Even though customers aren't guaranteed to speak to the same astrologer each time, the beta phase of Sanctuary convinced Clark that a strong corporate brand can make up for any decrease in personal affinity.

Like many who seek guidance from the cosmos, Sanctuary took some time to find its true path. It began as a project within the incubator of Lorne Michaels' Broadway Video Ventures.

David Birnbaum, then the operation's president, had taken a look at the online astrology market at the turn of the century when he was working in private equity with Apax Partners.

"Back then, we actually looked at rolling up a bunch of astrology sites – these companies were very antiquated, very web 1.0, mostly marketplaces to connect consumers to shady-looking people," Birnbaum said. "But I realised it was a massive market, and these companies were making fortunes."

Ross Clark joined as a chief executive and started playing around with business models. They tried out paid star chart readings on Facebook messenger and saw demand keep ticking up.

"Sixty percent of users came back at least once per week," Clark said. "I was sort of blown away when I saw those results."

Their seed round brought in money from the private equity firm Greycroft and Shari Redstone's personal venture outfit, Advancit Capital, and brought Kelly on board for astrological expertise.

And Chloe Drimal, who was Snapchat's 14th employee and has gone on to start a company called Yoni Circle, which creates guided meditation-like experiences for women in Los Angeles, came on as the company's West Coast advisor.

Snapchat founder Evan Spiegel recruited Drimal right out of college after she wrote an article praising the nascent disappearing message app for a Yale University newspaper. After a stint leading the company's corporate group therapy program, known as Council, Drimal ran Snap's ambitious Our Story product, which stitched together user videos from around the world into travel guides and breaking news reports.

"I was the girl at Snapchat that had sage on her desk and crystals," Drimal said.

She sees Sanctuary as a way to democratise the desire to trade cash for cosmic reassurance.

When asked whether they believe in the product they're pushing, the entrepreneurs behind the company describe astrology as more of a spark for self-reflection, or social connection, than a manifestation of cosmic destiny.

"I believe in anything that provides people with meaning and optimism in their daily lives," Birnbaum said. "For me, it might be going to my therapist on a weekly basis, which I do, for others it's talking to astrologers. 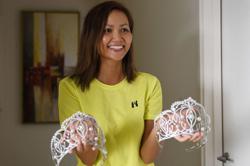