He skipped college, went to this Miami coding school — and got a US$8,000 raise

MIAMI: Calvin Simms always wanted to be a designer.

Growing up mostly in Fort Lauderdale with two working parents, Simms says he stayed in Florida partly because of finances. Cities with top industrial design schools were just too expensive. After taking classes at Miami-Dade and Palm Beach community colleges, he landed a job at a Fortune 500 company in its travel department.

But industrial design remained his first love. When a friend told him that Miami coding school Wyncode was launching a digital user experience (UX) design programme, he jumped. The programme's policy of deferring payment on its US$11,500 (RM46,653) tuition until the student starts a job made the change possible.

Today, Simms, 28, works for Wyntalent, Wyncode's in-house consulting agency. He declined to disclose his current salary but says it's about US$8,000 (RM32,454) more than what his old job paid him.

As Miami's unemployment rate hits its lowest level since 2008, high-skilled positions – especially in tech – are going unfilled. According to LinkedIn's monthly jobs report for Miami, the city has a surplus of lawyers, TV producers and event managers, and not enough software developers or programmers. Indeed.com lists more than 450 web developer positions open in South Florida and about 50 openings for UX designers. Salaries start north of US$50,000 (RM202,842) – no small thing in a region where the median annual wage is about US$35,000 (RM141,989). 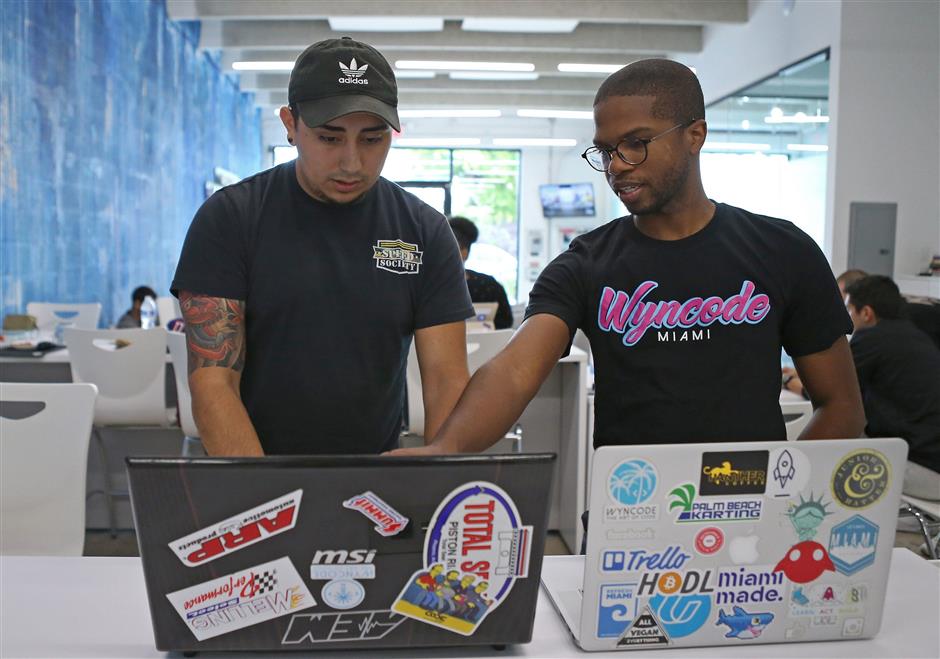 Simms working with one of the students at the Wyncode Academy in Miami. — Miami Herald/TNS

Yet many firms hiring in Miami remain unwilling to put in the time and effort to train new hires, according to Antonio Manueco, managing partner at tech consultancy blubeta and the co-founder of the Wynwood Tech Slack channel.

“Miami (firms) want to hire a super-experienced person and want to pay cheap,” Manueco said. “There's conflict between what Miami (companies) want at the price they want. They want plug-and-play and cheap.”

At the same time, many locals like Simms are looking to make a job switch to boost their earnings or find a more stable career.

Because local companies often seek out experienced developers, bootcamp grads sometimes struggle to find work. But more firms are recognising the value of hiring raw but promising students who can flourish with a bit of additional on-the-job training.

The local success comes as coding programmes have declines nationally amid increasing competition.

Two coding bootcamps with locations around the country announced last year they were shutting down, including The Iron Yard, which had opened a Tampa campus. Nationwide, coding bootcamps expected to graduate 22,949 students and grow by 52% last year, according to Course Report, a website that tracks coding schools' performance. The two programs that closed told the New York Times they ultimately could not find sustainable business models.

“While we continue to see incredible growth in the industry, natural consolidation” is occurring, Course report said in its most-recent state of the market report.

But LaunchCode's new Tampa campus remains active. Matt Mawhinney, director of candidate engagement at LaunchCode in South Florida, said it is incumbent upon schools to make sure their curricula stay on the cutting edge – and they are not merely producing generic developers.

“The market for junior developers has become a bit saturated,” he said.

But, “the different coding programs we have here can evolve. You don't have to teach the same thing ad infinitum. It's the responsibility of programmes to pivot to what employers are asking for.”

Wyncode is the largest program founded in Miami, and remains focused exclusively on the local market. Created four years ago by wife-and-husband team Johanna and Juha Mikkola, it has cultivated numerous local hiring partners. One is CareCloud, the Miami-based health tech firm that has become a standout Miami startup story. CareCloud has hired 20 Wyncoders from its web development program and one from the UX programme.

“We can now bring folks in from Wyncode, nurture them, then promote into senior positions,” said Mike Cuesta, CareCloud's vice president for marketing.

Wyncode is also bringing in its own talent: Last year, the school hired Gessica Tortolano, previously a leading UX captain at consulting giant SapientRazorfish. She says she got a “teaching bug” while serving as an instructor at a summer camp for coding and jumped at Wyncode's offer to head up its new UX programme. Her goal is to turn Miami into a UX hub within the next decade.

“We want people to look at Miami not just for travel and tourism but for really awesome product design, because no one has that claim yet, no one has put that flag in the ground,” she said. “The worst-case scenario is, that isn't what happens, and we just have a lot more people aware of the opportunity in the field.” 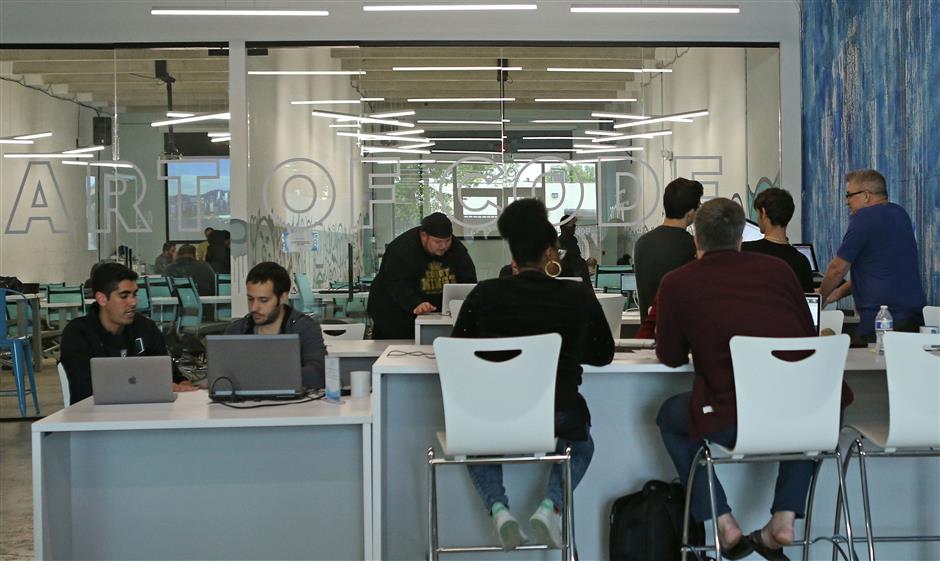 A general view of the Wyncode Academy in Miami. — Miami Herald/TNS

Getting accepted into a local programme is no sure thing. Wyncode received approximately 300 applications for the first seven slots of its new UX programme, Juha Mikkola said. Non-profit LaunchCode's Miami campus received 403 applications for its most recent cohort, accepting 150. Mawhinney says about 50% of LaunchCode grads don't have a college degree, and about one-quarter were unemployed before they began the programme.

“Usually it's folks already self-learning in web development or UX design, (someone who) has some passion, already self-studying on their own, who want to take it to next level,” he said. “It's not like 'I just woke up and wanna come.' That to us is red flag.”

“There are companies that can help foster the growth of junior developers if they have the bandwidth,” he said, but some startups might be more reluctant to take on someone with less experience if they're trying to grow fast.

Still, Miami's bootcamps “are making a dent on the current tech landscape,” he said.

Even as local companies say finding talent remains a struggle, finding a job can be just as difficult – even for candidates with skills honed at one of these schools. As of mid-July, just two of the six students from Wyncode's inaugural UX class had been hired, more than 80 days after graduation.

“The classroom portion of their program is good, they have good content,” said the former student, who asked not to be named. “However, the hiring support portion of their programme is severely lacking. The hiring partners they promote seem to be more of 'companies who have hired people from the programme in the past' ... .. but that was (web) development, and this is UX.”

Mikkola said Wyncode meets with graduates as much as twice a week as they search for jobs, and underscored that the school does not ask for payment until a grad finds work. In the case of UX, he said, it is still taking time for some South Florida companies to commit resources to create friendly, seamless websites and digital products.

By contrast, Mikkola said Wyncode's web developer cohort is usually about 50% hired by the 80-day benchmark. In 2016, the most recent year for which Wyncode has data, 70% of students had accepted work within 120 days, while 9% were still looking. Of those who were working, 52% had full-time jobs; another 33% had internships, contract or temp work, or part-time roles.

At LaunchCode, many grads end up with apprenticeships, working in a US$15 (RM60)-an-hour trial period. If an employer decides they're a good fit, students are often offered full-time positions at a higher salary.

For Neil Carroll, vice president of product and data at Financial Apps, a tech company based in Fort Lauderdale, that model has worked well.

“What we found with LaunchCode is, a certain type of candidate consistently gotten from them ... one whose mentality has been incredible, really driven, has initiative,” Financial Apps' Carroll said.

The schools have helped a wide demographic of South Floridians re-fashion careers. Many now make boosting women in tech a priority: Ironhack offers a 10 percent discount for all female applicants, and Wyncode has a rolling scholarship that helps place female candidates.

Nor is age a limiting factor. Robert Gelbman, 52, a former-programmer-turned-Uber-driver, learned that the ride-share service had partnered with Ironhack to sponsor new students. He applied, got accepted, and was hired as a junior developer at Kipu Health before he'd even graduated. He declined to give his new salary but said it was a “substantial" increase from what he'd previously been earning.

“I was willing to put in the work needed," Gelbman said. “I made sure I did everything there – the whole time I was there, I ate and slept code.”

Japan's Daikin picks Manchester, UK as test bed for green tech
Oracle to invest $1.5 billion in Saudi Arabia, open data centre in Riyadh
Dell to slash about 6,650 jobs -Bloomberg News
Like Musk, nickel-rich Indonesia has high electric vehicle ambitions
Elon Musk says he saved Twitter from 'bankruptcy,' on track to breakeven
ChatGPT will replace some jobs, but traders say not theirs
Illegal carpooling chat groups on Telegram grow in popularity in S’pore; authorities monitoring, will take action
Take note: Longer formats are coming to social media
How navigation apps are adapting to new mobility options
What are the ways to make money on Twitch?