Beyond the glass ceiling

Stock photo for the women in startup story

Increasing the number of women in the workforce has become a goal for more companies but it has to go beyond just numbers.

Startups are known for their capacity for disruption but now they could even be changing the conversation on gender equality at work.

For Crib – short for Creating Responsible and Innovative Businesses – a social enterprise that focuses on empowering women through entrepreneurship, ­increasing the number of women in the industry is an urgent ­mission with very real benefits to the ­economy as a whole.

Its four co-founders Dr Elaine Kim, Marilyn Lum, Tjin Lee and Mei Chee are entrepreneurs on a mission to help women, ­particularly mothers, enter the workforce, as they feel diversity is crucial in ­creating a robust and innovative ecosystem. 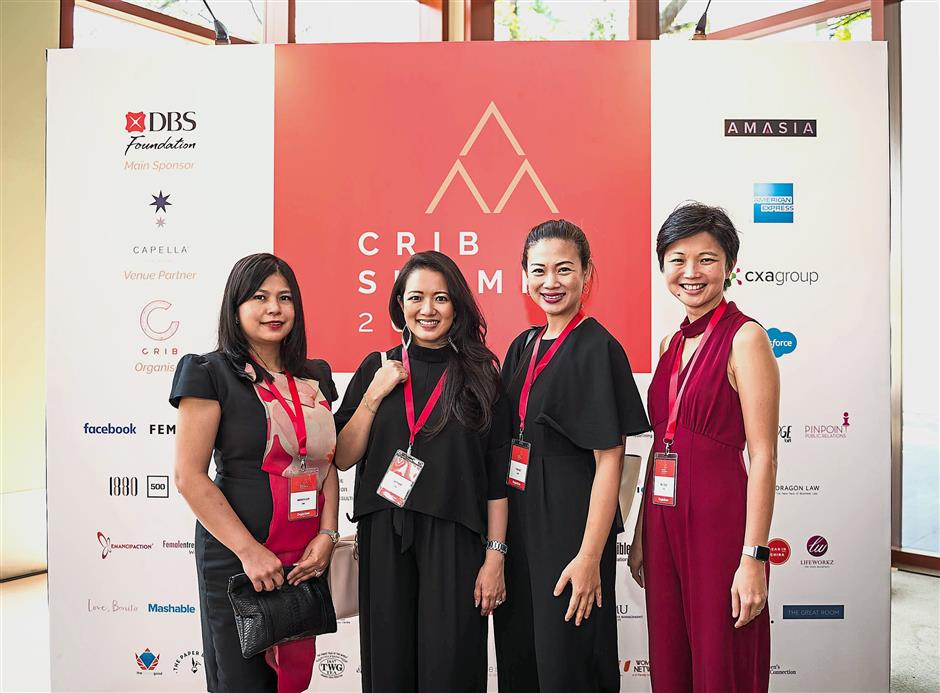 An International Monetary Fund report in 2016 says when women reach their full labour potential, they contribute significantly to the GDP (gross domestic product) of a country. Raising female labour force participation to male levels would boost GDP in the United States by 5%, in Japan by 9%, in the United Arab Emirates by 12%, and in Egypt by 34%, it claims.

According to the World Bank’s 2017 data, Malaysia is among the lowest ranking in South-East Asia when it comes to female participation in the labour force, standing at just 38.05%. This puts us behind neighbouring countries such as Indonesia (38.24%), Singapore (44.96), and Thailand (45.67%).

Dr Kim says the clockwork ­routine of corporate life makes it difficult for women to achieve work-life balance which is why startups are beginning to become an attractive option, as they tend to have flexible hours.

“That’s why you see many ­leaving corporate life because it’s impossible to be an engaged ­parent at the same time,” she says.

Though being a successful ­entrepreneur demands a lot of work and energy too, having good team members who can step up for each other gives parents a breather to spend time with their kids.

“There’s a whole generation of Millennials that want work life ­balance but corporations are just not adapting fast enough. Three months maternity leave is just not enough time to be present with your child,” she says.

Get a good start

Startups value tenacity, drive, passion and ­willingness to learn and because of that you can break down many barriers much faster, says GoGet chief ­community ­manager and co-founder Francesca Chia.

She says that the Malaysian startup ecosystem isn’t as skewed in terms of gender equality.

This, she says, is validated by her ­experience with the joint project by the United Nations Conference on Trade and Development and Alibaba Business School, the eFounders Initiative. Nine of the 37 entrepreneurs that ­p­­articipated in the course held at Alibaba’s headquarters in Hangzhou, China, were women. Of the nine women, four were Malaysians.

Though Otomate CEO and co-founder Kimberly Wan agrees that women have as much access to entrepreneurship training ­programmes as males, she says the decision makers are still predominantly men. Wan says more women in leadership roles will help inspire the next generation of women.

Otomate is an e-commerce ­platform that delivers ­personal care products at predetermined ­schedules and GoGet offers on-­demand help for errands such as food delivery, shopping, ­dispatch and even ­cleaning up houses or ­putting up flyers.

Chia says businesses based on diverse manpower will be more relevant to society.

“It’s the same ­philosophy as opening up industries to marginalised people, as the product will be relevant to a larger group,” she says.

Many organisations have women in top management or somewhere in the value chain that companies can tap into.

“If you’re running a sound ­entity, you should be listening to what people are saying,” she says, adding that customer feedback is also very important.

However, launching your own startup is not a bed of roses. Pantang Plus CEO Zamzana Mohd Arifin says that entrepreneurship can be a lonely journey and pushing too hard is a recipe for burnout.

Zamzana says that when starting Pantang Plus, she worked really hard, sleeping two-and-a-half hours a day with no holidays for a year.

It all came to a grinding halt when she fell sick and ended up being hospitalised.

She emphasises that to reach a good work-life balance, a good team and co-founder is essential. Pantang Plus founder and chief executive officer Zamzana Mohd Arifin with her staff and some of the merchandise they offer, at the company’s HQ. — S.S.KANESAN/The Star

Having found a dependable co-founder, Md Hisamudin Ahmad, she takes it slower now, as they have managed to develop better strategies to ensure steady demand so there is more breathing room.

Zamzana, who is a registered post natal therapist, says her ­platform offers post natal therapies and mothercare services like ­traditional ­massages, baths for the babies, housekeeping, laundry and even confinement-friendly meals.

“I promise to be kinder to myself, even if I feel that I have yet to earn it,” says Zamzana, revealing she makes time for short getaways and self-pampering sessions.

Chia says at the beginning work life balance is very hard to achieve at startups so it’s important to have the right support to smoothen out the rough ride.

“I have an amazing husband who helps in hard times and I don’t claim to have a great work-life balance yet,” she says, with a chuckle.

Chia says committing her ­personal life appointments to a ­calendar, and treating them as important as her work ­appoint- ments, is essential.

Most women also have to care for their child while juggling a job, which adds to the stress. The unique aspect of Trehaus is that the co-working space also features a play area for the members kids.

But it has one feature that many co-working spaces don’t – a kids’ atelier for children to play, eat, sleep and even learn English and Mandarin – all while their parents work from a hotdesk nearby.

“Many members have told us that three hours of catching up with work and clearing e-mails without leaving their kids with helpers elsewhere all-day lets them maintain their sanity,” shares Wu.

She says they’ve engaged ­companies to adopt similar ­strategies to retain parents and the organisation even got the attention of the Singapore Government. 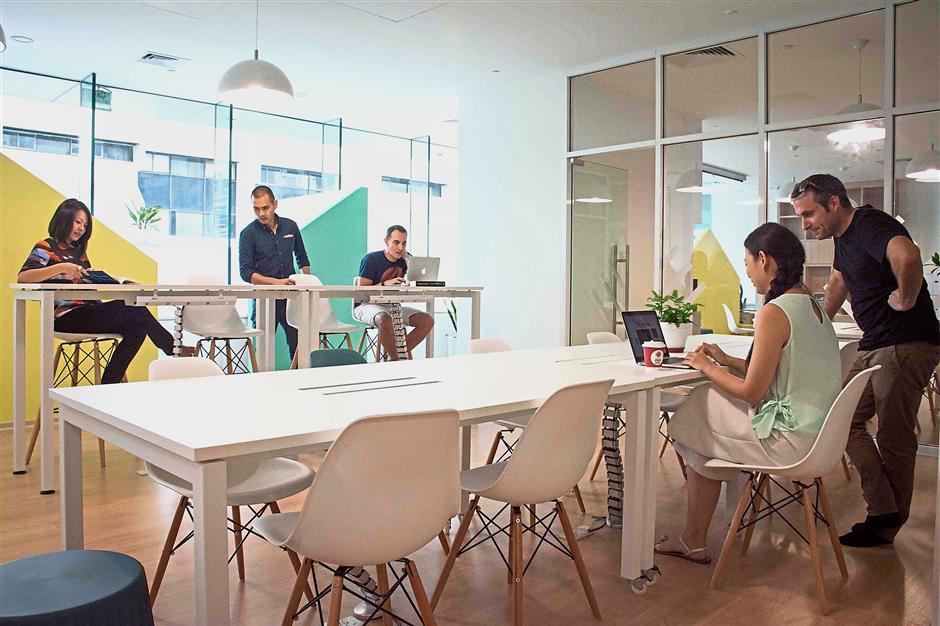 Senior Minister of State in the Prime Minister’s Office, Josephine Teo, who oversees the National Population and Talent Division, commended the effort, saying that the Government would consider giving it a boost should the concept gain traction.

Wu says Trehaus has plans to open several new locations in Singapore and was in early talks to also open in Kuala Lumpur.

Similar to Singapore, the Malaysian Government also seeks to plug the loss of women after they take maternity leave.

Among measures announced in Budget 2018 include giving women a one-year tax exemption if they return to work after a break of two years or more, offering longer paid maternity leave for some, and reducing working hours for others. There was also a ­proposal to make it mandatory for all new offices to have childcare facilities.

Fighting the battle on another front is Malaysian Global Innovation and Creativity Centre (MaGIC), which is organising its first Pre-Accelerator Bootcamp: Female Founders Edition to push for ­women-led startup. 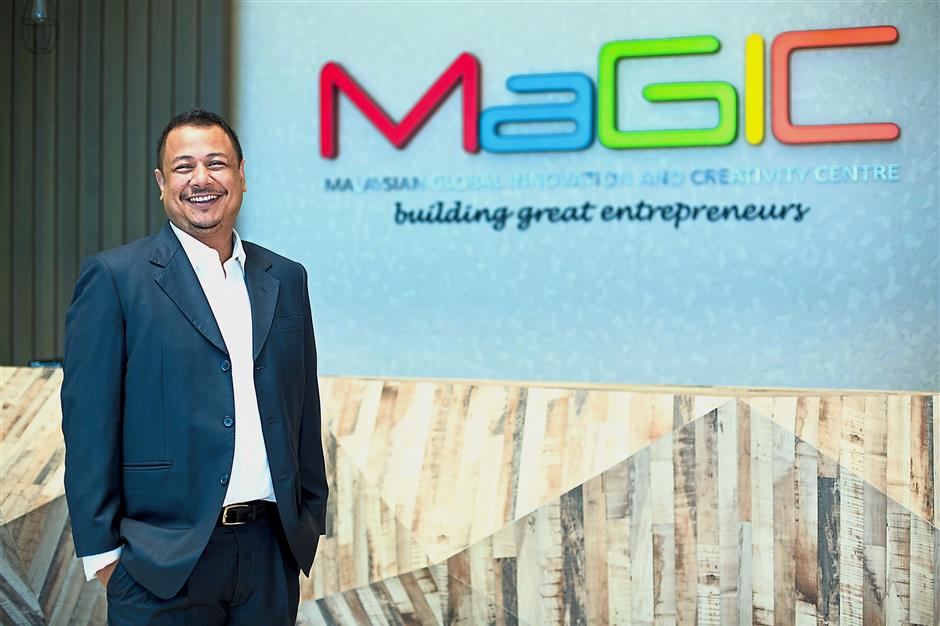 Ashran Ghazi says entrepreneurship helps women gain economic freedom, and for women graduating from universities it was also another avenue for a career beyond the usual corporate route.

The bootcamp which starts next month has so far attracted about 150 participants.

Its chief executive officer Ashran Ghazi says entrepreneurship helps women gain economic freedom, and for women graduating from universities it was also another avenue for a career beyond the usual corporate route.

“In my journey, I can vouch that having women founders helps to create the right balance – not just gender balance but differing ­opinions on how to go to market,” he says.

“Also, it’s invaluable when ­creating, say, a user interface that appeals to a broader audience.”

According to PitchBook – a ­database on mergers and ­acquisitions, private equities and VCs – of the US$85bil invested by VCs last year, all-women teams received just US$1.9bil (RM7.62bil) compared to US$66.9bil (RM268.4bil) raised by all-male teams. Mixed gender teams raised about US$10.2bil (RM40.92bil). The remaining US$5.95bil (RM23.87bil) was raised by teams whose gender composition was not ­determinable by Pitchbook.

In other words, all-women ­startups received about 2.2% of the total pot, versus all-male startups who took the lion’s share of 79%.

A drill down of the data by Fortune magazine found that all-women teams also got much less per deal, ­compared to equally matured all-male ­startups at the same round of funding.

Ashran reasons that this could be because VCs tend to be made up of men who may not relate to the product and services that are skewed to women.

“On a macro sense, it’s just like if your business doesn’t match their criteria. But if it makes ­business sense, the VC would be stupid not to invest,” he says.

Crib’s Dr Kim adds that since gender bias plays a role in the fund raising, getting more women as investors would break the impasse.

Crib addresses this on two fronts: running programmes to match members with like-­minded VCs and recruiting members to join its network of angel investors.

She says companies with more women in management positions have repeatedly been proven to perform better and provide ­higher returns.

The University of California, Davis, surveyed the 400 largest public companies headquartered in California – including Apple, Intel, Google, Visa, and Oracle – and found that the 25 firms with the highest percentage of women execs and board members had median returns on assets and ­equity in 2015 that’s at least 74% higher than the overall group.

Though still in its nascent stage, Dr Kim is hopeful that the region’s startups are off on the right foot where gender parity is concerned.

“What we’re doing here is to give an opportunity for those who want to be entrepreneurs. It’s not about achieving a 50-50 split but rather ensuring women can reach their full potential, whether they want to be house makers or entrepreneurs.

“No one path is better than the other,” she says.