After hiatus, Sony is back in the corporate venture capital game

If self-driving delivery vans ever hit the road, how is the package going to get from the truck at the curb to your doorstep?

An employee riding along could do it, or maybe a drone. But Agility Robotics thinks it has a better way – Cassie.

Named after the ostrich-like Cassowary bird of New Guinea, Cassie is a biped robot that actively balances like humans, is capable of navigating uneven ground and can recover from a stumble, said chief executive Damion Shelton.

“If your UPS truck is self-driving, then your driver is not a driver. They are a rider to run back and forth to the door,” he said. “So at that point the commercial demand (for Cassie) becomes pretty extreme because there is always pressure to automate when you can.”

Launched in 2016, the Innovation Fund targets early stage companies in robotics, artificial intelligence, virtual reality, video, music, entertainment and other technologies. It has invested in around 25 companies in the US, Japan and Europe so far. The average investment is a few million in each company.

“We are focused on early stage startups, so each investment is relatively small,” said Toshimoto Mitomo, senior investment executive for the fund. “But our plan is to stay with the company, and when they grow and need additional funding, we are open minded depending on the situation.”

While Sony has made corporate venture investments in the past, it took a hiatus in recent years as it restructured amid struggles with its core electronics business.

Now that the company is profitable again, it's renewed efforts to invest in startups.

“In the artificial intelligence area, for example, we do have a strong deep learning research team, but at the same time, the field is moving so fast,” said Hiroaki Kitano, who oversees Sony's Computer Sciences Laboratories. “The opportunity is so immense. So we can work with all these startups and explore more.”

Kitano led the team that developed Sony's Aibo robotic dog and is co-founder of RoboCup, an annual robotics competition with the long-term goal of creating a team of soccer playing robots than can beat the reigning World Cup champions. “The technology is important, but the technology is not the main thing for us,” added Mitomo. “What kind of value can the alternative business models provide to the end users is the ultimate goal.”

Novel business models were easy to spot among the 14 portfolio companies showing off their ideas in San Diego.

Theta Network, based in the Bay Area, is building a decentralised peer-to-peer content delivery platform powered by Blockchain technology.

Born out of the Sliver.tv e-sports streaming network, Theta's platform would tap powerful gaming computers to stream 360-degree virtual reality video, music, movies, educational programming, peer-to-peer to consumers, who could pay for both content and streaming via virtual Theta tokens.

Another Sony-backed startup, Shimmur, is building an easy-to-use text messaging management platform initially for musicians. It enables direct texts to and from fans. The messaging can be tailored based on location, getting the word out about nearby concert dates and other news.

While starting with musicians, Shimmur's platform translates to other many other industries, said Chief Executive Matthew Peltier.

“I think in the end the whole world wants to be direct to consumer,” he said.

Fotokite, a tethered drone, does not require a pilot, can fly for hours and has unlimited bandwidth to deliver streaming video.

“We put the drone in a box that gets mounted on top of a fire truck,” said chief executive Christopher McCall. “A firefighter pulls up to an emergency scene, pushes a single button and the Fotokite flies up and starts streaming thermal video down to firefighters.”

Perspective Robotics, the Swiss company which makes Fotokite, is working with a large fire truck manufacturer in the US. The drone also has been used by CNN to shoot news footage.

“Sony is very active in the public safety space, the broadcast space and the sports space, and those are the markets we are going after,” said McCall. 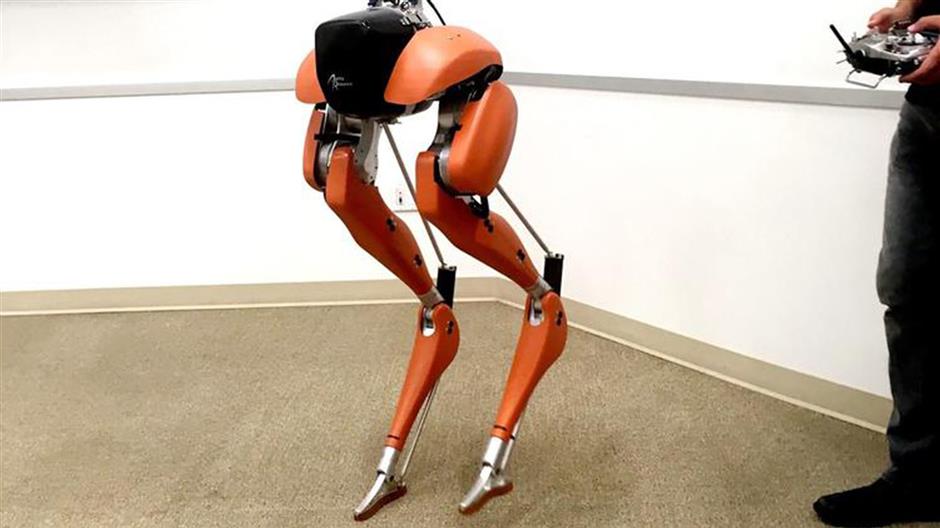 Cassie, a biped robot, can navigate uneven ground and recover from a stumble. — San Diego Union-Tribune/TNS

Cassie, the walking robot, was developed at Oregon State University with funding from a Defence Advanced Research Projects (DARPA) grant. Six have been sold so far, mostly to universities.

The company declined to disclose what Cassie costs, but the goal is to get the price low enough to spark widespread adoption.

“In order to make an impact, you need the technology to be approachable enough, low cost enough and safe enough to get out there in volume,” said Shelton. “Sony is the only company that has ever done that.” — The San Diego Union-Tribune/Tribune News Service