CHICAGO: While President Donald Trump was tweeting his “concerns” about Amazon.com on March 30, accusing the company of “putting many thousands of retailers out of business,” the Seattle-based e-commerce giant was preparing to give public officials and the press a sneak peek at its first warehouse in Illinois where robots work alongside humans to fill customers' orders.

Amazon's rapid expansion has created challenges for retail and other industries. But the company says it has also led to investment and new jobs, even as it introduces automated technology to handle some of the work that used to require human employees.

Although Amazon were giving outsiders their first look at the warehouse in south suburban Monee, it has been in operation since August. More than 2,000 full-time employees work alongside a fleet of squat, 320-pound orange robots that roll almost silently under the square towers of shelves they deliver to workers stowing newly arrived items or picking out products to be packed and shipped.

But most workers' jobs “aren't as different as you'd think” from what they'd be doing in a fulfilment centre without robots, said Jeff Messenger, the facility's general manager.

The warehouse is the company's first facility in Illinois where robots work alongside people to fill customer orders.

They work alongside their human counterparts rather than replace them, said Messenger, who describes himself on Twitter as a “robot manager” and worked in a Kenosha, Wisconsin, fulfilment centre that also uses the robots before coming to Monee. 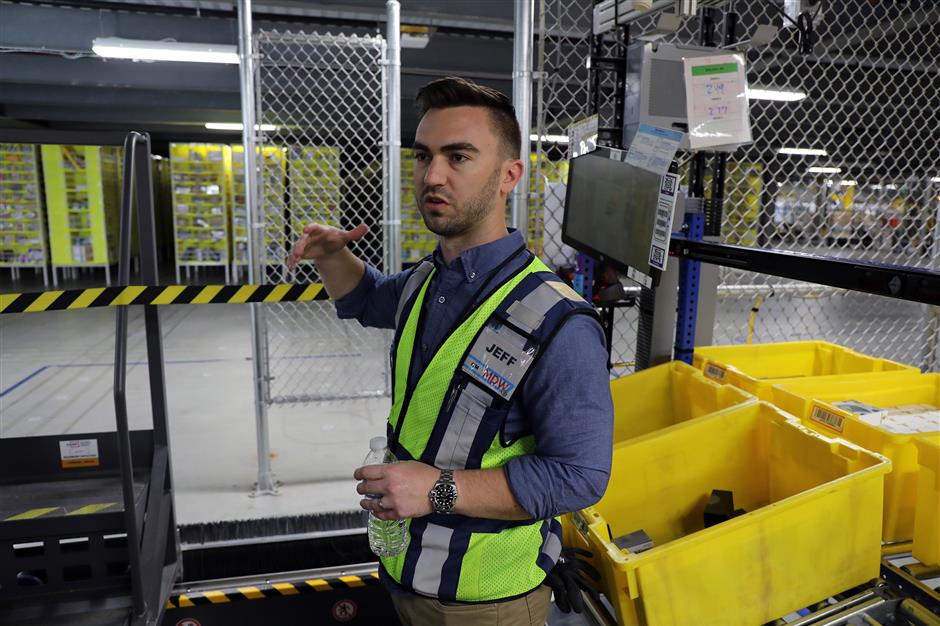 At the Amazon fulfilment centre in Monee, Illinois, Messenger talks about the robots in use there. — Chicago Tribune/TNS

Amazon says facilities with robots tend to employ more people than those without them because they're more efficient and process more orders. The 850,000-square-foot Monee site is one of nine Illinois fulfilment centres, which range in size from 400,000 square feet to nearly 1 million. It accounts for about a fifth of the more than 10,000 employees Amazon says it has in the state.

Of the more than 175 Amazon fulfilment centres worldwide, more than 25 have the Amazon Robotics drive units, with at least 100,000 in use. They're typically deployed in warehouses near cities, where there is a lot of demand for small consumer items that are easier for robots to deal with. Other fulfilment centres stock large, irregularly shaped items, like TVs and kayaks, that would pose more of a challenge.

Filling the same number of orders without the robots would require more people, and the jobs created by the need to build and maintain the new technology likely don't close the gap, said Marc Wulfraat, president of consulting firm MWVPL.

“But the big driver a lot of people lose sight of is the huge shortage of employees to work in warehouses,” he said. “It's not just Amazon (that is) having to automate some aspects as a result.”

The robots, which cover about five feet per second, can carry up to 750 pounds, sliding with towers on its back while navigating along 90º-angle paths by scanning markers on the floor. They have cameras to sense if something unexpected is in the way, but Amazon still keeps separate work areas for people and robots. The Amazon fulfilment centre in Monee uses robots to help workers fulfil orders. The robots lift stacks of products and move them to a worker. — Chicago Tribune/TNS

The robots primarily handle what would otherwise be grunt work, like walking warehouse aisles, Messenger said, though some tasks handled by humans also have been designed to reduce the number of choices workers have to make. Employees who pack orders typically work at stations that handle similar size merchandise requiring the same type of packaging so workers don't have to choose from a range of boxes and padded envelopes, and stations automatically dispense the appropriate amount of packing tape.

Full-time warehouse workers in Monee can make US$13 (RM50) per hour, according to a recent Amazon job ad. There are also some positions that require more technical expertise, such as those that involve maintaining maintain the robots or analysing data, though those workers are outnumbered by the employees filling orders.

Companies are working on developing robots that can pick out items to fill an order, but automating the task of packing a box has proved tougher, Wulfraat said. It also still takes a human to step in when things don't work perfectly, like retrieving an envelope stuck in a packaging machine before moving to a conveyor belt.