To celebrate 50 years since kids programming languages were first introduced, Google created a special Google Doodle Coding for Carrots game directed at kids to get them excited and engaged about coding.

The doodle game, developed by the Google Doodle team, Google Blockly team and researchers from MIT Scratch, involves a six-level quest in which players help a furry rabbit gather carrots by popping together coding blocks.

It's based on MIT's Scratch programming language for kids.

In the 1960s, Seymour Papert and other MIT researchers developed the first kids coding language, giving kids the ability to program the movements of a turtle. It was called Logo.

"Kids programming on computers must have sounded futuristic and impractical in the 1960's when Logo was first created," MIT researcher Champika Fernando told Google. "This week, millions of people around the world can and will have their first experience with coding. It makes me happy to think of all of the nine-year-olds who will get their first coding experience playing with today's Doodle."

Want more ways to get your child excited about programming? Here are five resources (including apps and toys) to get started:

Scratch
Scratch is from the same MIT folks who brought you the Coding for Carrots Google doodle and is part of MIT's Lifelong Kindergarten Lab.

Robot Turtles
Developed by former Google developer Dan Shapiro, Robot Turtles is a coding toy designed for children ages three to eight – and it looks like your average board game.

The game's aim is to get a turtle to a jewel on the board by giving it specific directions using a system of cards.

"The point is to help kids learn to put together instructions in sequence, an essential skill in coding," LiveScience reported. US$24.99 (RM102) at Amazon.com.

Kodable
Kodable is a free, web-based app (compatible with iPad) available for free on iOS.

Blockly
Kids older than 10 years and adults who aren't fond of cartoons and the like, may find Blockly, Google's refinement of Scratch, better suited for learning code.

Though Blockly isn't as fully developed as Scratch, it can output multiple different programming languages, including JavaScript, Python, PHP and more.

You can also see the code as you link blocks together in each game, allowing you to watch as languages and their syntax change for a given program.

This is a web-based program.

Daisy the Dinosaur
This free iOS app features fun mini games designed to teach kids in kindergarten through third grade the basics of programming. It's compatible with iPad.

Using a list of commands (turn, grow, roll, etc), kids can direct Daisy the Dino across the screen. In challenge mode, players are only given a limited number of command pieces and have to figure out how to complete the given task using them.

The app's interface is attractive to non-techies, too, and is a good alternative for introducing concepts of programming. — The Atlanta Journal-Constitution/Tribune News Service Google Search is a target of US antitrust probes, rival says 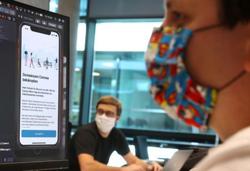