WiMax operator P1, which was acquired by TM two years ago today, has now been rebranded as a mobile digital service provider Webe.

While the identity change signals a brand new start for it, no plans and pricing have been revealed yet.

At this point it has only unveiled its community funding platform called Webe Community.

Unlike crowdsourcing or crowdfunding platforms, Webe Community projects will be fully funded by Webe itself (and not the users) as long as enough of the community back the project.

Each user who registers at the Community will receive 50 webits which can be used to vote for projects they like.

More webits can be earned by sharing a project on social media networks such as Facebook or Twitter. If the project meets the requirement, say, 20,000 supporters and 1,000,000 webits within 30 days, it will be funded by Webe.

Some of the projects on Community include building a container as classroom for special needs students, dengue outbreak prediction app, and field trip for underprivileged kids using Google’s virtual reality cardboard. For more on the projects, check out our earlier story.

Webe chief operating officer CC Puan assured existing P1 customers that they can continue enjoying the benefits of their plans until Webe launches its new packages sometime around the middle of the year. They will then be given the choice to switch to the new plans. 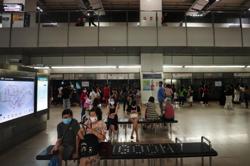