Vehicle of the future: Members of the media watching an autonomous self-driving vehicle on the road during a demonstration in Singapore.

SINGAPORE: Singapore unveiled its public transport future, and it was a vision of passengers commuting in driverless buses along roads and freeways populated by platoons of autonomous trucks following a single driver.

The city state's plans to streamline its transport future have begun with two self-driving vehicles going through their paces in a Singapore estate that is home to research facilities and educational institutes.

The vehicles are the vanguard of two projects – one run by the Singapore-MIT Alliance for Research and Technology (SMART) with the National University of Singapore and one by the Agency for Science, Technology and Research.

Some US states and countries including Germany also allow testing of driverless vehicles on public roads.

Singapore, with its limited land and workforce, is hoping that autonomous vehicles will encourage its residents to use more shared vehicles and public transport, and avoid further congestion on its roads.

"Trying to look for bus drivers, truck drivers – big challenge for us," said Pang Kin Keong, permanent secretary in the ministry of transport. 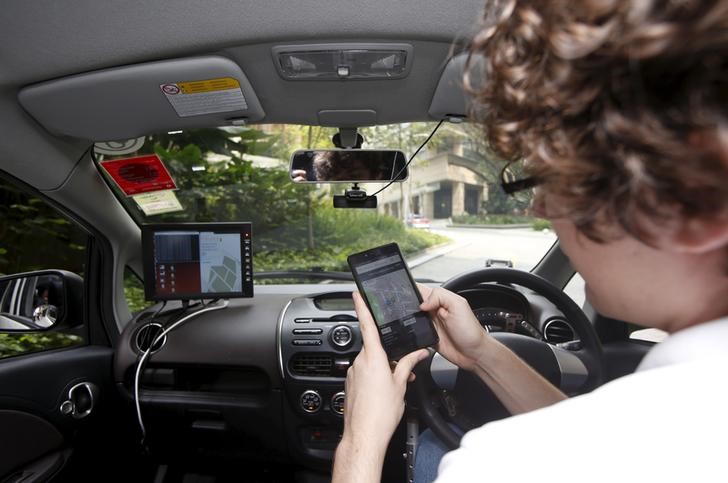 A crew member inputs his route in an autonomous self-driving vehicle on the road during a demo in Singapore. — Reuters

"We don't have a huge population and these are not some of the professions which Singaporeans aspire to," Pang said after taking a ride in SMART-NUS' driverless car – a modified Mitsubishi Motors Corp electric vehicle with a top speed of 30km per hour (20 mph).

The government and port operator PSA Corp also said that they would seek proposals to design and implement autonomous truck platooning trials, in which a human-driven truck is followed by other driverless trucks.

Autonomous vehicles could spur the mass-market adoption of ride sharing, ultimately resulting in a marked reduction in personally owned vehicles and in the total number of cars on the road, at least within cities, according to a Boston Consulting Group report in April.

Google and a number of automotive manufacturers and suppliers have said the technology to build self-driving cars should be ready by 2020.

The Singapore government said in June that it was seeking ideas on how autonomous vehicle technology could be harnessed for more land transport options.