All hands on deck: Ewe uses the popular videogame Minecraft to teach the art of programming.

A popular videogame and MIT-designed programming language is drawing kids into the world of coding.

Shayan Singh, eight, is one of the many kids who spends hours ­playing the Minecraft videogame.

He breaks and builds blocks in a 3D world, not unlike a virtual Lego wonderland. He is free to build almost anything he can dream up, be it jungles or ancient buildings. He can also battle giant spiders and skeletons in the game, if he is so inclined.

Minecraft has become a ­phenomenon, selling over 20 ­million copies worldwide on PC alone since its debut in 2011. That’s not taking into account the other platforms it’s available on like Sony’s PlayStation 3, PS4 and PS Vita, as well as Microsoft’s Xbox 360 and Xbox One. There is also a Pocket Edition for Android and iOS mobile phones.

But Shayan has gone a little ­further than most kids – he has learnt to modify the game world using a third-party tool called Minecraft Forge. Shayan made the grass in the Minecraft game look like British flags at the Tech Hero classes.

Shayan made the grass in the game look like British flags. “It’s hard work but it was worth it. I’ve always wanted to visit the country because my favourite YouTuber is in Britain,” he says.

His father Dilbag Singh knew that his son was fond of the game and it was just the thing to get him to attend a five-day coding class for kids.

“If I threw him straight into any coding class, he wouldn’t have liked it. I selected one that would train him using Minecraft because he would get to fiddle with the codes of a game he spends so much time on,” says Dilbag.

Minecraft Forge is just one of the tools being used to get kids to start coding at an early age. Another version of Minecraft that’s popular in classrooms is Minecraft: Pi Edition, a modular version of the game that can be played on ­credit-card sized computer called the Raspberry Pi.

Minecraft: Pi was created ­specifically as an educational tool for novice programmers to allow them to tinker with the game’s code via a built-in interface. The game, which comes free with every Raspberry Pi running on the Raspbian operating system, was programmed with Python. Python allows users to conceptualise with fewer lines of code than languages like C++ or Java.

The human brain is a biological neural network with neurons ­acting as pathways for ­transmitting electrical signals and coding helps the brain to develop a more complex network.

Bikesh Lakhmichand, chief ­executive officer of iTrainKids, says children today start playing Minecraft at the age of three and this shows that they are ready to code as they are already thinking logically. Sophia Barsing learning web development at the Made With Code event in 2014, organised by MDeC and iTrain. — iTrainKids

Sophia Barsing, 10, says Minecraft Pi made it easier for her to understand coding. “I changed the sky from blue to red and the grass from green to purple in a few minutes,” she says.

The best thing about the Raspberry Pi is that it costs about RM200, making it more affordable than a laptop, he says.

“It could be a kid’s first ­computer,” he adds.

The other tool that educators use is Scratch, a programming ­language that allows children to animate characters by dragging and dropping built-in codes. For instance, they could make a dog bark or wag its tail a hundred times by combining and modifying blocks of codes.

Created by the Massachusetts Institute of Technology and released to the public in 2007, it works via a web browser so kids can start experimenting ­immediately. “Coding is not as laborious as it used to be. It’s now a matter of dragging and dropping lines of code,” says Bikesh, who started coding the traditional way on Basic at the age of six on a Commodore 64 back in the 1980s.

“It’s a great place to start to learn coding. Nothing compares to the level of interactivity that Scratch offers. Typical ­programming languages just don’t have that,” says Ewe.

“Teaching kids to code is about instilling curiosity and creativity.”

He says if kids begin coding with Scratch, they could go on to ­another visual coding language such as AppInventor for making apps for Android mobile phones.

“If they really want to pursue coding after that then they could go on to Python and then C++,” he says.

Coming to our schools

A proposal to teach ICT (Information and Communications Technology) in schools starting in 2017 which includes coding is now awaiting the approval of Education Minister Datuk Seri Mahdzir Khalid.

Although ICT literacy programmes have been taught in schools since 2002, they are not as elaborate as the one being proposed, says Sofian Azmi, head of sector, innovation, information and communication technology at the Education Ministry.

The objective of the new proposal is to emphasise computational thinking which will equip students with problem-solving skills, and data representation to help them understand how computers handle data.

The new proposal will see ICT being taught from Standard One to Form Five, compared with the existing programme where it’s restricted to Standard Five to Form Two students. Also, unlike the current programme, students will be accessed at school level. However, it has yet to be decided if ICT will be taught as a standalone subject or as part of Maths or Science.

If the proposal is approved, selected teachers will undergo a three-month online course to train them to teach coding in Scratch.

Scratch was chosen because the Government will not incur costly licensing fees as it’s free, says Sofian.

“It’s high time this happened. After all, the emphasis is on Malaysia becoming a digital nation,” he says.

Hardware and connectivity would not be an issue as most schools have PCs or Google Chromebooks with proper Internet access, he adds.

Even remote schools would not be left behind as students can connect to the Internet by satellite under the 1BestariNet programme.

A Microsoft survey involving 1,850 students from Asia showed a growing interest in coding among students – 88% of students in Malaysia wanted to know more about coding and 68% wished it would be offered as a core subject in schools.

According to a 2014 study by SchooleEducationGateway, 12 countries – including Denmark, Greece, Ireland, Italy, Poland, Portugal and Britain – have ­introduced coding as part of the school curriculum. 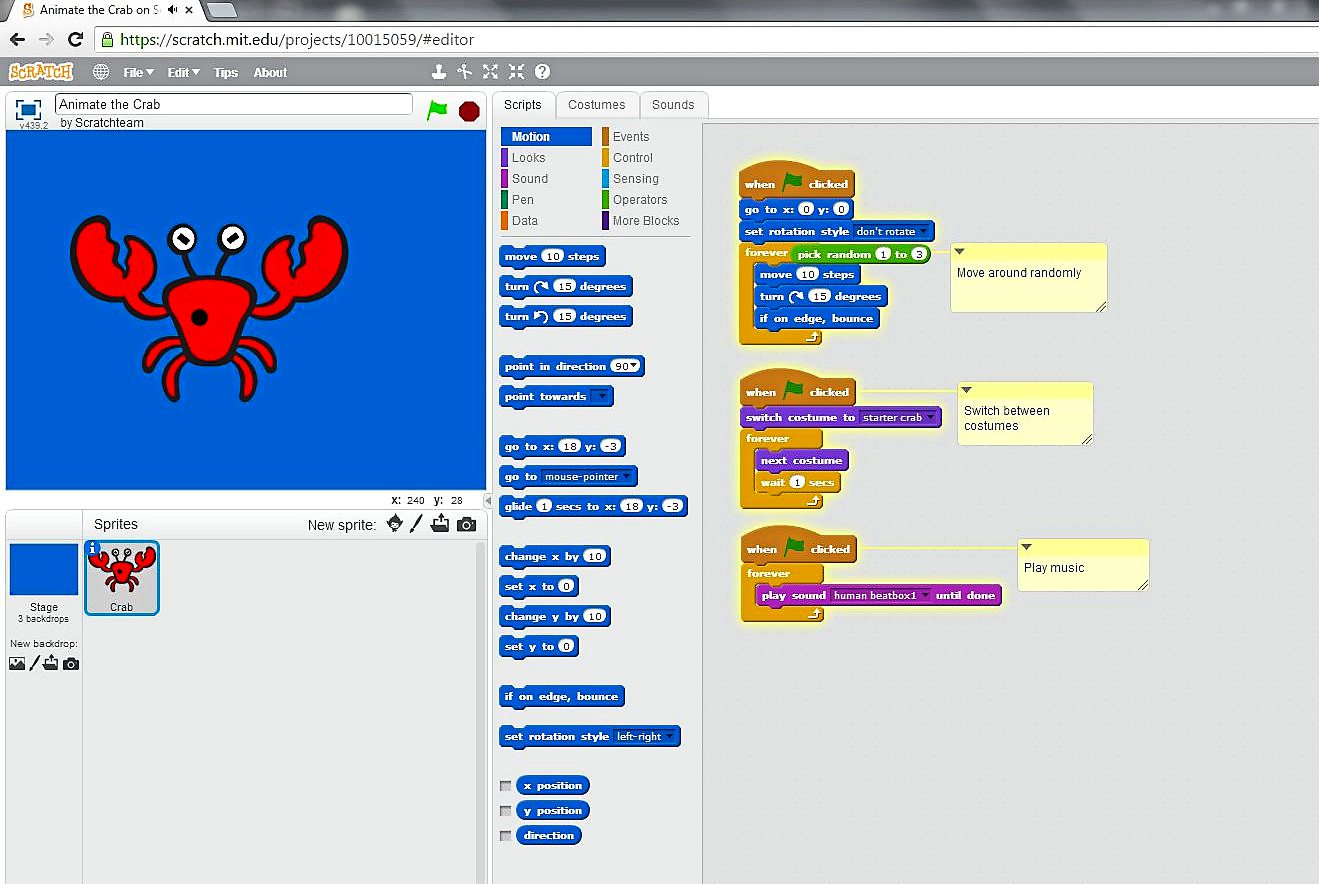 Scratch is a tool where kids can learn to animate by stringing pre-existing blocks of codes together. — STEVEN PATRICK/The Star

Tech giants have also been ­pushing for kids to start coding at an early age. Microsoft’s global ­initiative WeSpeakCode was held in April last year in schools in the Klang Valley and Kuantan. The kids were taught a visual programming language for half a day. More than 2,000 kids, aged seven to 17 from seven schools participated in the campaign, now in its second year in Malaysia.

It also included an Hour of Code programme, which allows anyone to experience coding in just an hour by visiting code.org.

Introducing coding may not turn our kids into the next Steve Jobs or Bill Gates but it will equip and prepare them for the digital economy.