ABIDJAN, Ivory Coast: Services allowing consumers to perform banking and payment operations on their mobile phones are surging in sub-Saharan Africa, blazing a trail for the rest of the slower-moving world to follow.

Given that relatively few Africans have traditional bank accounts while most now own a mobile phone, it is of little wonder the region has taken the global lead in using the devices to pay bills, make purchases, manage their savings or get fast access to cash.

Data from the World Bank for 2014 also showed that while less than 29% of people aged 15 and over in the region had a traditional bank account, around 10% possessed an alternative accessible by mobile phone. That figure rose to over 50% in countries like Gabon, Kenya and Sudan. 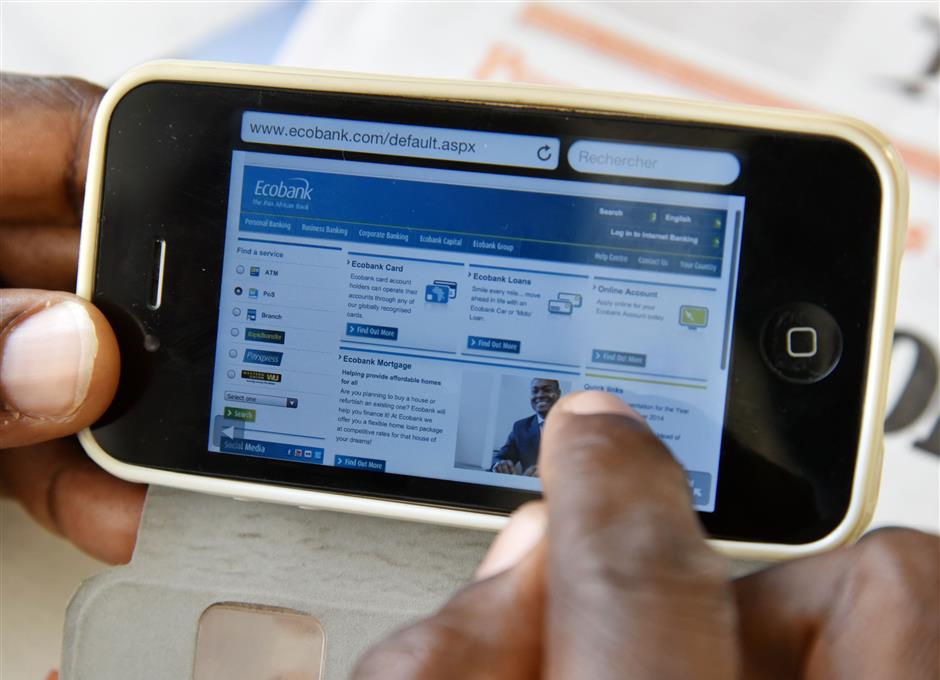 TAKING OFF: A man looking at Pan-African bank Ecobank's website to consult his account on his mobile phone in Abidjan. Mobile banking, providing services like money transfer or bill payment, is developing fast in Sub-Saharan Africa, with 10% of the population using it and up to 50% in countries such as Gabon, Kenya or Sudan, according to the World Bank. – AFP

Overall, the World Bank found 16% of sub-Saharan mobile users have used their phones for banking purposes – a figure larger than any other global region, and ripe for far wider use still.

In 2014 alone, about US$67bil (RM237.79bil) in funds were transferred by African expatriates back to people on the continent. With fees charged by mobile banking companies for transactions generally lower than traditional intermediaries like Western Union, the growth potential for financial phone applications appears enormous.

"Paying an electricity bill in Africa takes a half a day because there are very few offices where that is possible. So there's a real social service in being able to settle bills from a distance," said Alban Luherne, director of Orange Money, the mobile banking unit of French operator Orange.

The Boston Consulting Group estimates that further development of mobile payment applications could generate as much as US$1.5bil (RM5.32bil) in sales by 2019, when it says the number of Africans possessing a mobile phone should increase by another 25%.

"This segment is very new, with the numerous companies active in it mainly being start-ups positioning themselves," said BCG consultant Othman Omary, adding that "there still isn't an actor of reference."

The exception to that rule, Omary noted, is Kenya's M-Pesa service by British telecom giant Vodafone's subsidiary Safaricom, which has become a leading force in the sector.

But even there, he said, M-Pesa's success has been built mostly on a favourable regulatory and technological environment absent in other markets.

"There have been many difficulties, even failures in the sector, M-Pesa notwithstanding," said Georges Ferre, a consultant with the Roland Berger consultancy.

"For things to work, you need a country with supportive regulation and reversals in cultural attitudes that often view money as meaning cash," he said.

Omary said that as mobile banking models are developed in Africa, they'll need to take into account the very low income flows of their main client base.

That means prices charged for services must be limited to affordable levels to encourage widespread use.

"If processing costs are similar to those of a traditional bank, making a profit is going to be difficult," Omary added.

Because of that, said Orange Money's Luherne, return on investment must remain a relatively long-term concern, as consumers gradually embrace management and spending of their money in digital format.

"We initially launched this service to enhance customer loyalty, and that has proven extremely effective in doing so," he said.

But "over the years, we realised it was a source of revenue in its own right, and a new growth activity for the group," he added, noting Orange Money now generates 5% of company income.

Orange Money is going even further, preparing credit offers via mobile phones in partnership with the pan-African Ecobank. It is also considering providing savings and insurance plans by mobile.

Omary said that large-scale migration to new mobile banking capacities may occur faster than some expect, with many people in Africa already used to alternative borrowing options like loans from relatives to obtain needed cash.

"Mobile phones could be an interesting alternative to that in terms of cost and security," he said. – AFP