CURIOUSITY FACTOR?: Apple's flagship Australian retail store in Sydney was packed with those hoping for a glimpse of the Apple Watch.

SYDNEY/SAN FRANCISCO: Consumers in Australia flocked to Apple Inc's store in Sydney on April 10 to get the world's first up-close look at the tech giant's smartwatch, which the company expects will be its next runaway hit.

The Apple Watch, CEO Tim Cook's first new major product, was available for pre-order online and to try out in stores – but not take home.

On April 24, consumers will be able to buy it online or by reservation at retail locations including high-end fashion boutiques in Paris, London and Tokyo, part of Apple's strategy of positioning the wearable computer as a must-have accessory.

On April 10 Apple's Australian flagship store in Sydney's financial district was packed with those hoping to peek at the device, although just around 20 die-hard fans queued out front, modest by the standards of a major Apple launch.

Alexander Bock, a backpacker from Germany, stood outside the shop's towering glass façade. He hopes to save enough money to buy the sports version of the watch, he said.

"I feel naked without a watch. I think I will buy the Apple watch with the sports band ... I'm working very hard right now so I can buy this watch," Bock told Reuters.

Based on recent customer interest at its stores, Apple expects demand for the watch, which allows users to check e-mail, listen to music and make phone calls when paired with an iPhone, to exceed availability at launch, it said. 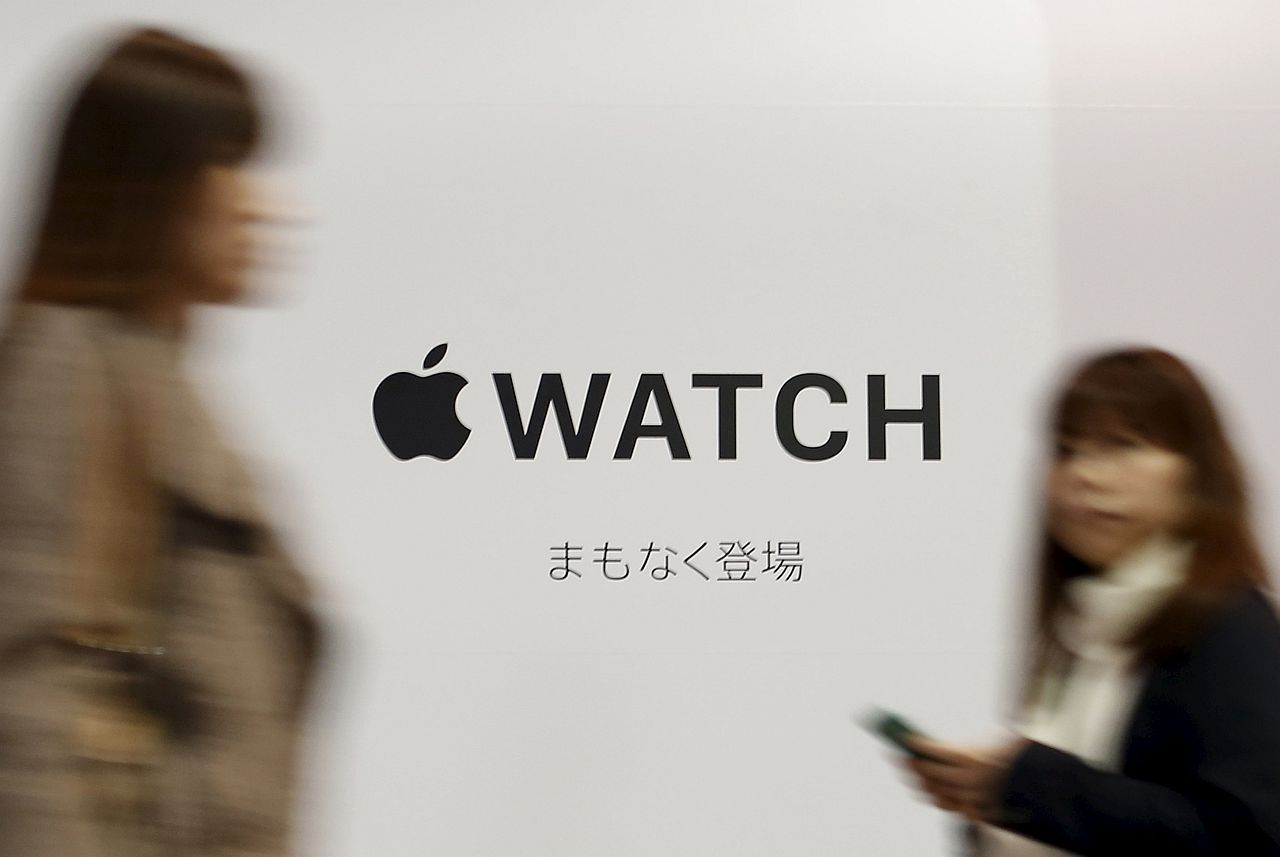 HIGH END STORES: A pedestrian using her smartphone walking past an advertisement board for Apple Watch outside the Isetan department store in Tokyo, part of Apple's strategy of positioning the wearable computer as a must-have accessory. – Reuters

Reviewers this week praised the watch, which also helps users monitor their health and exercise, as "beautiful" and "stylish" but gave it poor marks for relatively low battery life and slow-loading apps.

For women, the various sizes and wrist bands make this smartwatch more pleasing than earlier versions from Samsung Electronics Co Ltd and others, said Kantar World Panel market analyst Carolina Milanesi, who has been wearing the watch for a few days.

At the Apple Store in Omotesando, a high-end shopping district in the heart of Tokyo, dozens of shoppers huddled around two glass displays, snapping pictures of the range of options available on the different watch models.

"I actually tried it on briefly, and it's so light it doesn't feel like it's on my wrist," 26-year-old salesman Yosuke Hosoi told Reuters.

"Is it for everybody? No, but I don't think any wearables are yet," Milanesi said.

Apple's watch is widely expected to outsell those by Samsung, Sony Corp and Fitbit, that have attracted modest interest from consumers. It will likely account for 55% of global smartwatch shipments this year, according to Societe Generale.

Underscoring its marketing strategy, Apple is selling the watch through a handful of high-end stores including Selfridges in London, Galeries Lafayette in Paris and Isetan in Tokyo.

"This is just Apple's interpretation of the watch, I don't think watch makers should be worried at all," Stephen Fenech, editor of the Tech Guide website, told Reuters. SKY HIGH EXPECTATIONS: Apple's watch is widely expected to outsell those by Samsung, Sony Corp and Fitbit, and will likely account for 55% of global smartwatch shipments this year, according to Societe Generale. – Reuters

"This is just Apple's expression where they've combined what they are good at with the fact that it's a watch with style so I think there's going to be room for everyone."

JMP analyst Alex Gauna said he and others on Wall Street would be at stores this weekend to gauge consumer reaction.

But the typically long queues at its stores on product launch days could be a thing of the past as the company emphasises online sales, according to a leaked internal memo from retail chief Angela Ahrendts, reported by Business Insider.

"The days of waiting in line and crossing fingers for a product are over for our customers," she wrote.

"This is a significant change in mindset, and we need your help to make it happen. Tell your customers we have more availability online, and show them how easy it is to order."

At an Apple Store in Hong Kong there was no queue, although half a dozen customers gathered near the shop door, cheering when it was opened. Demos were by online registration, after which a Reuters reporter received a demo without having to wait.

"I didn't know it's the first day. I am here to buy an iPad," said a 26-year-old customer who gave her name only as Ms Jian, visiting from China's Chongqing. "I will take a look at the watch later."