AMSTERDAM: Beneath the low beams of a converted warehouse in Amsterdam lives a company with many of the attributes of a Silicon Valley startup, except that at less than a year old it has zero venture capital and says it is already making enough money to sustain itself.

Fairphone started in 2010 as a campaign against smartphone makers’ use of conflict minerals. Last year, after a series of artistic and social protests to highlight what it says are injustices in global supply chains, its founders decided to make and sell phones of their own.

The company has now sold more than 41,000 phones in Europe using African minerals it certifies as “conflict free”, and will begin selling in the United States in 2015. Co-founder Bas van Abel, a 37-year-old Dutch artist, concedes his company is far from a panacea for the ills of mass-manufacturing, but says it is working to improve conditions for the Chinese workers who assemble the handsets.

“We had to be economically viable because we wanted to be part of the economic system,” said Van Abel.

Europe’s politicians would like more success stories like Fairphone. In a continent where one in five young people are out of work, governments are pumping more and more cash into startups in the hope they can goose economic growth. Exact numbers are hard to determine, but according to AngelList, a website for new companies, there are now more than 4,700 startups in Europe, compared with nearly 14,000 in the United States.

As in North America and Asia, most European tech startups focus on software. In the Netherlands, though, Fairphone and a handful of other firms are trying to change manufacturing.

Some are taking the principles of what’s known as the sharing economy pioneered by car-poolers like Lyft or room-sharer Airbnb, and applying them to the way things are made. That could reshape not just how people produce things, but how they buy them, and even the economics of intellectual property. The Dutch focus on manufacturing stems partly from the Netherlands’ strong design culture, and the ground-breaking 3D printing community found there and in neighbouring Belgium. Belgian 3D printing firm Materialise, a pioneer in 3D printing, has been around for more than two decades.

The Dutch startups capture many of the main differences with startups in the United States. Like all young European firms, they face big financing challenges. Europe is the world’s biggest single market, but it struggles to fund its newest firms.

Fairphone was born as part of a Dutch state-backed project; its early capital came partly from a UK government-funded incubator. But Van Abel says its single biggest source of funding was downpayments from individuals — mostly German — who wanted to buy its phones.

Van Abel admits child labour and bribery are hard to avoid when dealing with mines in Democratic Republic of Congo. The project wants people to think more about the way they consume things. “We want our customers to understand they are part of the process,” he said. “We’ve proved there’s a market that ... wants social values as part of the product proposition.”

That sentiment is a familiar one.

“Europeans culturally are much more reserved than Americans,” said Jon Bradford, managing director at TechStars, an incubator, who has helped dozens of startups in Europe from London to Moscow.

“You should not necessarily (think) that because someone is quiet and doesn’t run around and say ‘look at me, aren’t I awesome,’ that that is a limiting factor when it comes to their ambition.”

The dream of starting a tech company on a few thousand dollars and turning it into billions is one of Silicon Valley’s greatest exports. As the cost of computing has fallen, it has moved within reach of more people. In a study published in March, the Organisation for Economic Cooperation and Development (OECD) found nearly half of all new jobs in 18 countries are created by young, growing companies.

That’s one reason why cities around the world have begun to encourage high-speed boot camps where startups pool resources such as office space, electricity and even legal help, and volunteer mentors help get things going.

In one such bootcamp on an Amsterdam canal this year, a freshly graduated firm called 3D Hubs has assembled what its founders call the world’s biggest network of 3D printers. The company doesn’t own the more than 7,500 printers it connects — enough to collaboratively 3D print a life-size replica of the Statue of Liberty in less than a week — because they are owned by individuals and other businesses, mostly in the United States. 3D Hubs has simply created a network which others can tap into for a fee.

Here’s how it works: If a designer in New York, say, urgently needs to deliver a prototype to Sydney, they send instructions to a 3D printer in Australia which creates the object on the spot. 3D Hubs charges a 15% commission on each print job; currently it handles around 10,000 prints per month for an average US$10 (RM32) per part. 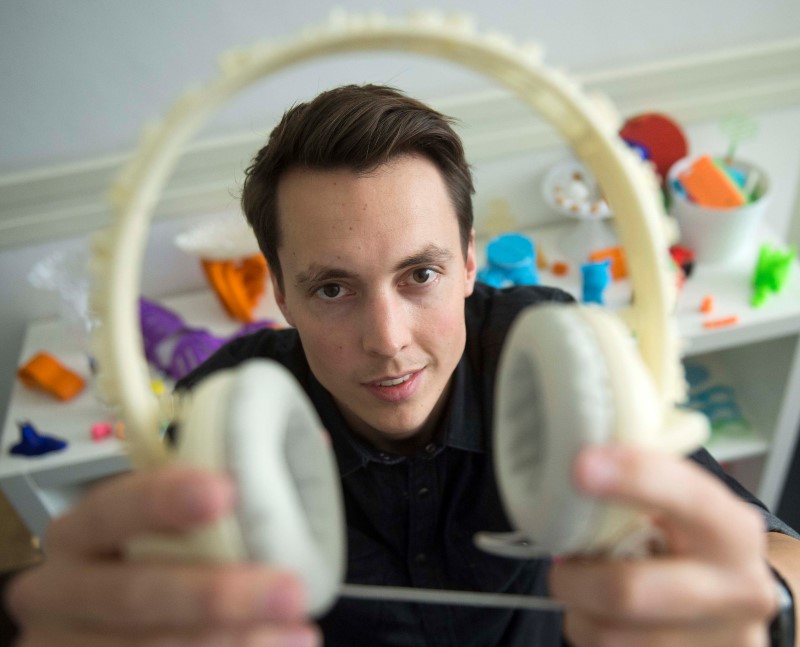 MINTING MONEY: 3D Hubs co-founder Brian Garret holding a set of headphones, the first object he 3D-printed, while posing for a photograph at the company's office in Amsterdam. — Reuters

Co-founder Brian Garret, whose first invention was a 3D-printed pair of headphones with the lyrics of a favourite song in relief across the headband, said the idea is that printing capacity can work like a real-time market: When demand is high, the cost will rise.

“We’re really thinking big,” said Garret, 29. “We want to offer people access to 3D printing and for that to be an alternative to mass production.” The bottom line, according to Garret: “business can become local again.”

Shapeways is another young Dutch 3D printing firm. It runs two factories, one in Eindhoven in the Netherlands and one in New York, that let anyone — from haute-couture designers to cat-lovers — print what they want. Jewellery, accessories for gadgets such as personalised iPhone cases, and homeware are most popular.

CEO Peter Weijmarshausen moved the firm’s headquarters to New York in 2010 to be close to its main market and attract talent and investment. It now employs 150 people and hosts around 19,000 online shops opened by its customers to sell designs they have made.

Like others, Weijmarshausen believes 3D printing will challenge mass production. As for many European startups, the biggest single obstacle is follow-on venture funding.

“I spoke to a lot of VCs in Europe, they all were like interested but they never really committed,” said Weijmarshausen.

To close the funding gap, governments are stepping in. Around 40% of all venture capital in Europe comes from governments, according to the European Private Equity and Venture Capital Association (EVCA).

Public cash for innovation was squeezed by the financial crisis, though Europe is beginning to spend more again: Over the next seven years Brussels will devote at least €850mil (RM3.54bil) of its €80bil (RM333.46bil) innovation budget to help new and growing small firms.

One conduit for that money will be the European Investment Fund, which is mostly owned by European governments, and gives money to venture capital funds to invest in small companies.

The EIF said the need for cash is obvious: More than two-thirds of the funds it has given money to since 2011 have failed to reach their target size. Investors are wary of big risks in what has been a highly fractured market.

“European venture capitalists have had to work in a more capital constrained environment,” said Anne Glover, chairman of the EVCA. “But they are creating companies which are of equal if not greater value than those in other regions.”

Crowdfunding — the European Commission reckons about half a million European projects receive a total of €1bil (RM4.16bil) in crowdfunding a year — is growing, but has limits.

The most important need is money for research. Average government spending on research and development for the 28 member states of the European Union was 1.97% of GDP in 2012, behind China on 1.98% and far short of America’s level near 3%, according to OECD data. Industry in the United States invests about twice as much on research as it does in Europe.

For economist Mariana Mazzucato, who specialises in innovation, the lack of investment in Europe is a big problem. “I just don’t think startups are the point,” she said. “One of the big questions is actually how to get business itself to be more innovative — firms of all different sizes.”

Mazzucato’s research shows large-scale funding has been essential to past breakthroughs. All the most important technologies in Apple’s iPhone and iPad, for instance, were developed outside Silicon Valley and largely state funded, including a Nobel-winning breakthrough by European scientists Albert Fert and Peter Gruenberg.

Fairphone shows how quickly small firms may need to scale up. Van Abel remembers the day he tried to pay the factory in Chongqing, China, which had agreed to make phones.

“I totally panicked,” he said. “I was at home and my kids were running around ... I had 1.5 million ready and I pushed the button, and it went ‘EHHH.’ Because Internet banking doesn’t allow you to transfer €1.5mil (RM6.24mil) to some account in China. I had to do it in batches.” — Reuters