"Privacy" shows audience it hasn't got much in digital age

DEFT TRICK: An undated handout photograph made available by The Donmar Warehouse theatre shows actor Joshua McGuire during the play 'Privacy' by James Graham in London. "Privacy," a new drama that has London buzzing, is probably the first play to open with a request that audience members keep their smartphones switched on, rather than off. It's certainly the first to have theatergoers snapping selfies midway through the first act. By the end, they may be tempted to throw those phones out the window.

LONDON: Privacy may well be the first play to open by asking the audience members to please leave their mobile phones turned on, and advising those few spectators who haven't got one to look at their neighbour's.

Those smartphones are among the stars of the new play by British playwright James Graham, which opened this week at London's intimate Donmar Warehouse. And like a late-generation phone, Privacy is crammed with an awful lot of features.

They include a vast number of characters, ranging from British foreign minister William Hague to British civil liberties advocate Shami Chakrabarti to the Guardian newspaper's defence and intelligence correspondent, Ewen MacAskill, who was part of the team that broke the Edward Snowden NSA leaks story.

Those and at least a dozen more are played for the two hour and 30-minute running time by a half dozen actors and actresses. 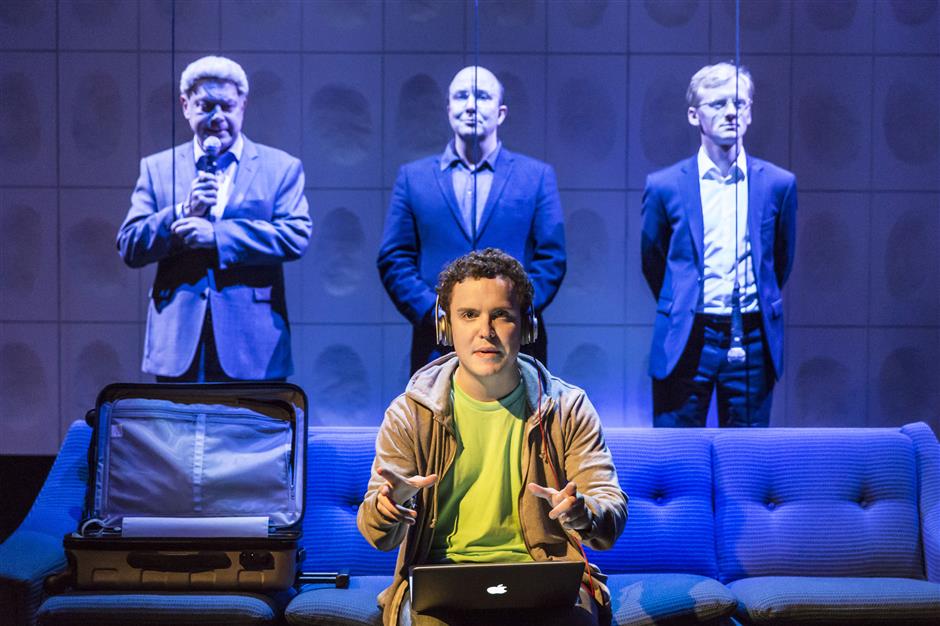 CHOCK-FUL OF TRICKS: Privacy is crammed with an awful lot of features, including a vast number of characters, ranging from British foreign minister William Hague to British civil liberties advocate Shami Chakrabarti to the Guardian newspaper's defence and intelligence correspondent, Ewen MacAskill, who was part of the team that broke the Edward Snowden NSA leaks story. — The Donmar Warehouse

None has a more important line than the one who repeats Hague's famous rationale for the government's wholesale collection of data on private citizens, exposed by the Snowden leaks: If you are a law-abiding citizen "you have nothing to fear" from intelligence services listening in.

The rest of the evening is devoted to showing how wrong Hague was. People who haven't done anything wrong might still worry about strangers being able to track their movements down to the addresses they have visited recently and how long they spent there, or about advertisers using nuggets of information about their tastes and preferences littered across the Internet to promote a product until they finally cave in and buy it.

One of the play's darkly comic revelations shows that shoppers using Amazon in the United States to buy a baseball bat get offers to add a baseball glove. British purchasers get a suggestion to add a balaclava — a useful disguise for somebody using a bat as a weapon.

All the while, a young man seated onstage at a desk with an Apple notebook computer has been using the theatre's WiFi to mine the audience's mobile phones. He finds out their professions and where they live and, a bit later, provides a quick slide-show montage projected onstage of their houses, as taken from the images available on Google Earth.

All this is a bit like an old-time magic show, with the smartphone replacing the rabbit in the hat. It is all loosely strung on a narrative about a character called "The Writer", played by Joshua McGuire, who is a Luddite resisting all things digital and social networky. He is being goaded by "The Director", played with almost sadistic gusto by Michelle Terry, to deliver a play about, what else — Privacy.

The play touches on many facets of the privacy issue in the digital age, from government snooping to commercial use of data. "When you use a service that is free, you are the product being sold," one of the characters says.

Where it falls short is in building a case, on one side or the other. Is trading off free services and greater security worth the commercial exploitation of personal data and wholesale government collection of personal communications?

"For all its urgent topicality, I felt the play short-circuited the crucial debate about how we guarantee a measure of privacy in the digital age," reviewer Michael Billington wrote in The Guardian.

"What I longed for was a real intellectual tussle between those who see our essential privacy as under threat and those — there are some — who argue that is the price we pay for security from external threat." — Reuters