RFID technology is set to play a major role in speeding up queue lines of goods at the border, thanks to a homegrown solution.

PROCESSING a single truck ­carrying goods coming into Malaysia can take up to two hours. A highly manual process, it involves a customs broker or agent, a stack of paper forms, and a long queue to get everything signed, and the cargo inspected by a customs ­official before crossing the border.

It is a scenario which will soon change, with the injection of radio frequency identification (RFID) ­technology into the customs clearing process.

Following a three-month trial run, which ended in August, The Royal Malaysian Customs has given a homegrown RFID tag system the green light to be fully implemented.

Developed by Smartag Solutions Sdn Bhd, the system will be deployed in stages at more than 200 Customs checkpoints and 600 high-value bonded warehouses nationwide.

This is a project which will take about two years to complete, and has an investment cost of RM45mil.

RFID uses radio waves to transfer data from an electronic tag or label attached to an object through a ­reader for the purpose of identifying and tracking the object.

It is a technology that would be familiar to most Malaysians because it is also incorporated in the Touch ‘n Go cards developed by Teras Teknologi Sdn Bhd.

Globally, logistics and ­transportation are major areas of implementation for RFID ­technology, and with this project Malaysia now leads the curve in terms of ­deployment scale and its integration with Customs within the region.

“It has been an interesting ­journey,” notes P.K. Lim, CEO of Smartag Solutions, whose ­company developed the security and trade facilitation system based on ISO18186:2010 and GS1 EPCglobal EPCIS standards.

The track and trace solution ­provider has been an active player in port-to-port, and cross-border RFID cargo system solutions since its inception in 2004.

In 2008, it collaborated with Shanghai Super Electronics Technology Co Ltd for the ­deployment of linkages for an RFID tag project between Shanghai Port in China and Johor Port in Malaysia.

Lim credits the Johor project for many of the lessons learnt and later applied by the company for the security and trade facilitation system that underwent trials earlier this year.

The project, financed by Smartag which has invested RM3mil to date in the venture, is also one of the 12 initiatives under the Government’s Economic Transformation Programme.

At least three million K8 forms (applications to tranship/move goods for dutiable cargo), are said to be used every year for Customs clearance in Malaysia.

The main reason a ­physical ­inspection needs to occur at Customs checkpoints at every stage of a ­cargo’s journey, is to ensure that the goods have not been tampered with en route to their destinations. Smartag’s solution allows users to secure containers using a RFID tag as a “seal,” with a digitally generated key code. The RFID tags are designed by the company and manufactured by suppliers in China.

The process begins with the user logging into Smartag’s ­proprietary software to access the RFID Container Seal Registration screen.

A customs declaration form is filled out electronically along with other details such as truck number, container number, number of seals (for how many doors a particular container holds).

The physical tag is then put on top of a scanner unit attached to the computer to be scanned and an electronic code is generated specifically for and assigned to the unit.

The data will then be ­transmitted to the Sistem Maklumat Kastam (SMK), or Customs Information System, while the physical tag or seal is then attached to the outer door of the cargo container after being inspected by a Customs ­official.

These tags are then scanned by RFID readers set up at locations that will retrieve information about the container allowing users to automatically track the container’s movement.

Should the seal be tampered with in any way, the system is ­automatically alerted and Customs officials at the next checkpoint will be able to inspect it.

By implementing a system, which is able to reassure Customs that the cargo has not been tampered with in any way from its point of origin, it negates the need for the ­container to be opened and ­manually ­inspected.

Only a single piece of paper will be required from the truck driver for Customs officials to process.

At a press conference during the soft launch of the system at the Second Air Cargo Complex Penang in September, chairman of the Air Freight Association of Malaysia, Walter Culas, said the industry welcomed the use of the system.

“It demonstrated its potential to increase Customs clearance efficiency, and paperless clearance and processes. The industry is fully supportive of the project and the nationwide implementation,” he said.

As one of the trial participants, DHL Global Forwarding reported 1,670 successful transactions ­during the test period with no errors or failures.

“It was quite a smooth transition and definitely an improvement in terms of speed and practicality,” said Suresh Rukmangathan, head of branch at DHL Global Forwarding in Penang. Suresh said DHL’s Penang operations handles about 40 tonnes of inbound cargo and 30 tonnes of outbound cargo daily.

The global provider of freight transportation and related ­logistics services also reported that by reducing the need for human ­intervention at Customs ­checkpoints, the processing time was reduced by at least 50%.

While the company declined to share how much in savings the new system would yield, citing the need for further qualification, it intends to move forward with full ­implementation and expects savings to be in the five-figure range.

Another global brand that has given the system its endorsement is TNT Express Worldwide NV.

“Smartag’s system is unique as it is a one-stop solution, as opposed to similar deployments adopted in other countries incorporating some smart architecture. The fact that it is integrated with Custom’s own IT infrastructure is also another (plus) factor,” said Dinesh.

Smartag’s Lim said the solution is a closed system, and all data is hosted by Customs’ own datecentre in Putrajaya, with each individual RFID unit linked back to the main system.

Dinesh urged more local ­companies to adopt the RFID seal, noting at this early stage that a ­bigger uptake rate is still needed from the local freight transport community.

“Despite it being a rather costly upgrade, the long term benefits more than make up for the initial cost. I am hopeful that this will be a tipping point for the industry,” he said, adding that the ­technology was “the easy part” given the ­fragmented nature of the logistics and transport industry, making it difficult to make changes at a ­regulatory level.

An RM10-per-container ­movement fee is expected to be charged by Smartag, the cost certain to decrease for users as the volume increases.

Lim said the company estimates the return on its investments to be recovered within the next two years.

Moving forward, Smartag will be upgrading its existing RFID units come January to include a Global Positioning System (GPS) module in response to client feedback.

“Right now it is an optional ­feature but the bigger and newer units will have it as a standard ­feature,” he said.

TNT also sees much ­potential in the Malaysian-made ­system and intends to advocate its ­implementation beyond the ­country’s borders, aiming for an eventual goal of a commonly ­recognised seal across the Asean region.

Lim said the system is being reviewed by the Royal Thai Customs Department while discussions have begun with Singapore Customs for trial runs.

The security and trade ­facilitation system was spotlighted at this year’s MSC Malaysia Asia Pacific ICT Alliance (Apicta) Awards ceremony, when Smartag won in The Best of e-Logistics category.

The Apicta Awards is under the patronage of the Prime Minister and provides a platform to stimulate creativity, innovation and excellence in ICT (information and communications technology) in Malaysia.

It is also to benchmark Malaysian ICT products and solutions, and to recognise outstanding ­achievements in ICT by students, technopreneurs, small and medium enterprises, and organisations with operations in the country. 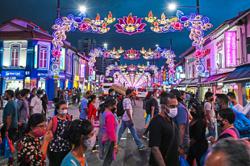 Many more worried about jobs than virus