Just like before the S Pen takes advantage of the Note 4's large screen and makes navigation intuitive.

The latest phablet from Samsung is big in size and features.

Back in 2011, large smartphones were uncommon and considered too big for the average consumer. Fast forward to now and the landscape has completely changed. They have become so popular that they have created a new category of devices called phablets.

One of the most anticipated ­phablets is the Samsung Note 4 which has just reached our shores and here’s what we think of it.

As this is the company’s flagship phablet, it has been given the premium treatment. The new Note has a body with a metal frame and a faux leather back — it looks really nice especially when compared with the Note 3.

Although the Note 4 has the same screen size (5.7in) as its predecessor, the resolution has been bumped to Quad HD. 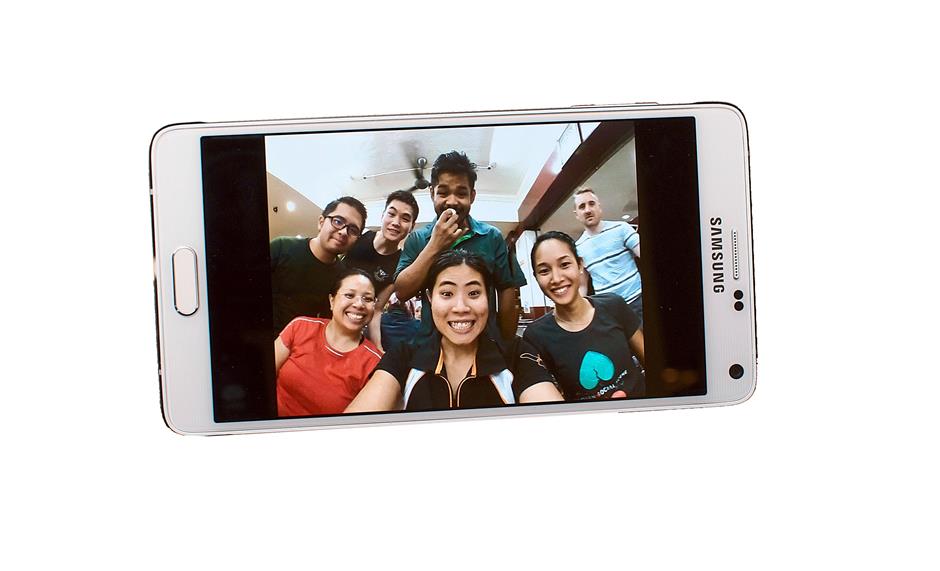 ALL IN: You don't need a selfie stick to capture a group photo thanks to the new Wide Selfie mode.

It’s bright and vibrant, and is without a doubt one of the sharpest and nicest displays for a smartphone. It was great for browsing the Web, watching movies and reading e-books.

The device has also inherited a couple of features from the Galaxy S5 ­smartphone, namely the fingerprint scanner for ­authentication and a heart rate monitor for keeping track of your health.

If you are getting the Note 4, chances are you are doing it for the S Pen which makes it easy to take notes and doodle on the phablet. Samsung has been improving the stylus since the first Note and it says the current version works very much like an actual pen.

The S Pen may look the same as the ­previous model but pressure sensitivity has been improved and there are two new effects — calligraphy pen and fountain pen. Pressing harder when writing will result in broader and darker strokes which will allow you to get creative with your doodling. DOODLE AWAY: Snap Photo mode lets you capture written notes that you can later edit on the Note 4.

A number of other functions also take advantage of the S Pen, such as Smart Select. This feature allows you to select multiple images and text from any app such as a web broswer or Facebook with the S Pen. You can then collate them and share them via services such as e-mail, WhatsApp and Dropbox.

Photo Note is a nifty new feature that ­recognises text in photos. You could, for instance, take snapshots of an article and edit them later with the S Pen. It’s not perfect — we didn’t like how it made the letters thicker — but it’s handy nonetheless.

The Note 4 has a powerful 1.9GHz octa-core processor and 3GB RAM. With such firepower, it’s not surprising that it had no issues running multiple apps.

We loved multitasking with the Note 4 and the Multi Window feature is easier than ever to use. Selected apps such as Facebook, WhatsApp, Chrome and Camera can be made to run in a smaller window while you have another app open.

So, you could, for instance even have the Camera app running in a window while you are chatting on WhatsApp.

We also tried out games such as Asphalt Overdrive, Modern Combat 4 and Dead Trigger 2, all of which ran smoothly on the Note 4.

The Note 4 comes with 32GB for storing all your apps, games and files. If that’s not enough you can buy Micro SD cards to ­supplement it.

The Note 4’s 16-megapixel rear camera has optical image stabilisation (OIS) to help you steady your shots, especially when shooting in low-light condition.

The camera will be a little clunky to use if you not used to handling a phablet this size. Also, tapping the screen to focus still doesn’t feel as good as having a dedicated camera ­button. It is one of the things we wish Samsung would include in a future model. 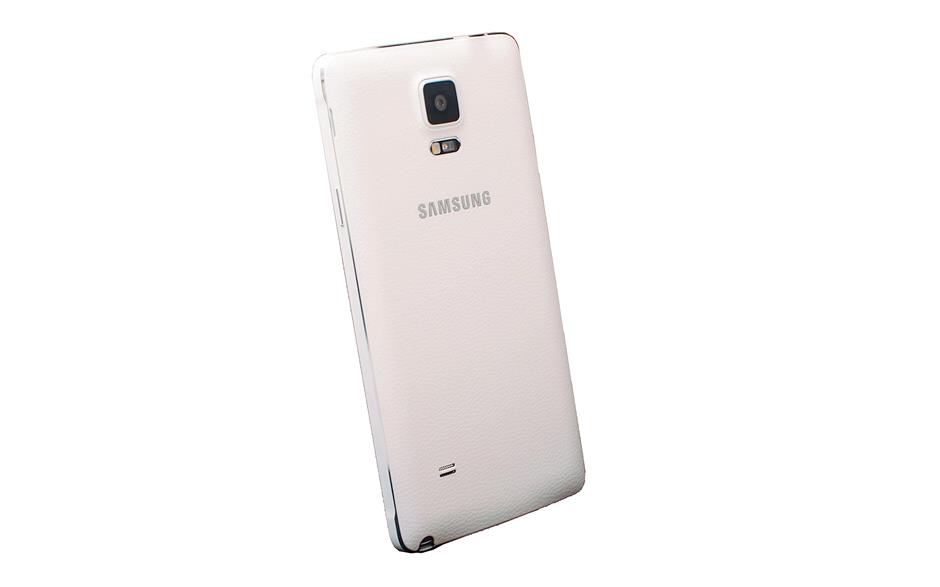 STEADY AS SHE GOES: The 16-megapixel rear camera has OIS to steady shaky shots.

Images turned out with good contrast and exposure when shot under bright light and low-light ­performance was also better than with previous models thanks to OIS.

Autofocus is fairly quick as was facial recognition when shooting a group of people. The only time this didn’t work well was when there wasn’t enough light which caused the camera to constantly hunt for a subject to focus on.

Like the S5, the Note 4 can record videos in 4K resolution and full HD but it has the benefit of OIS for steadying shots.

The front-facing 3.7-­megapixel has a wide-­angle lens so you can easily fit more people in your group selfie. There is even a Wide Selfie mode that lets you ­capture a large group of people by panning the phone from left to right so no one is left out.

Also, the heart rate monitor on the back can double up as the camera button which is handy for selfie shots. 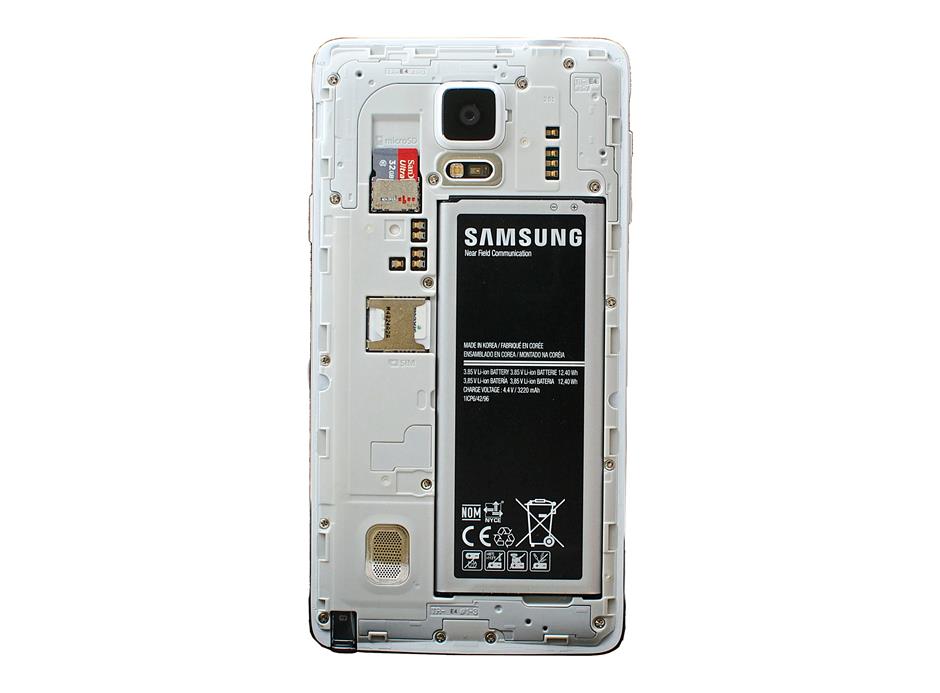 LONG LASTING: The Note 4's high capacity battery is capable of lasting an entire day easily and is removable, too.

In terms of battery life, you won’t be ­disappointed with the 3,220mAh battery. It easily lasted a whole day of moderate usage which included web surfing, posting on social media and shooting photos.

If you do run out of power, the Note 4 has a fast charging function that will get it up to 50% power in just 30 minutes. This is a plus point in our book, as most modern ­smartphones run out of battery too fast under heavy usage.

There is no shortage of great phablets on the market but despite the stiff competition, Samsung still managed to come out with a great phablet.

We liked the new design of the Note 4 which gives it more class, the improved S Pen, the quad HD screen and battery life.

If you are in the market for a ­premium device then this phablet is ­definitely worth checking out, as it’s one of the best.