Sony Alpha: Evolution of the A7

Sony's full-frame mirrorless camera gets a few but useful updates.

Sony has a rather confusing naming convention for the Alpha A7 series. Not only is the Alpha name also used for its DSLRs but the A7 series also has a different lens mount compared to the previous APS-C and full-frame models.

What’s more confusing, however, is that the A7 name is not a particular model but represents an entire series of cameras which all look nearly identical in design but are quite different internally. DETAILED: The 24-megapixel full-frame sensor in the Sony A7 II.

Now, Sony has released an ­updated version of the 24-­megapixel A7 called the A7 II and it looks almost the same as every other model in the A7 range, so it’s more confusing than ever.

That’s not to say that the design of the A7 II is not pleasing – in fact, the A7 II and its siblings are some of the nicest-looking cameras with retro designs on the market.

With the A7 II, Sony has retained the 24-megapixel sensor and that’s actually a good thing as it’s an excellent performer.

But what’s new? Well, quite a few things. 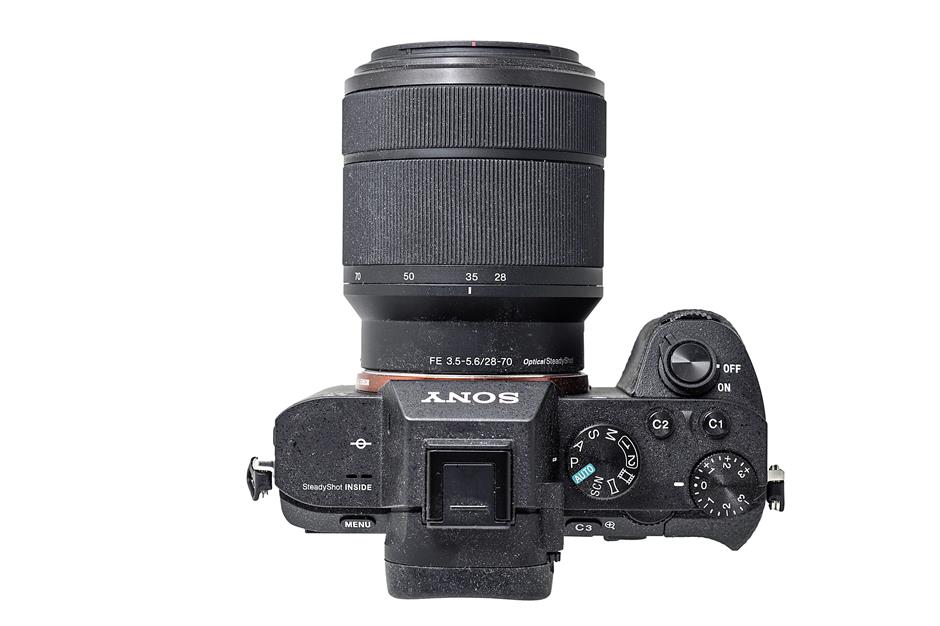 COMPACT: Despite being a full-frame camera, the A7 II is not much bigger than other mirrorless cameras.

The major addition to the A7 II is a five-axis in-body sensor-shift image stabilisation (SSIS) system, making this camera the first full-frame model on the market to have such a feature.

The main advantage of SSIS is that every lens you mount on the camera gets to take advantage of this feature.

However, Sony already has some lenses with in-lens optical ­stabilisation and if you use one of these, the A7 II will disable the in-body system. It’s logical really, as having both on at the same time could cause some problems.

Also, Sony claims to have improved autofocus speed and the ability to track moving objects. I found it very fast in bright light, but under dim artificial lighting indoors, the autofocus is slower and tends to hunt a bit. SLIGHT CHANGE: The top plate of the Sony A7 II has been redesigned with the shutter release now on the front.

Externally, the A7 II may look much the same as the A7, but there are subtle redesigns here and there – the grip is contoured and deeper, making it nicer to hold while the shutter release button and front command dial have been relocated to a more logical and comfortable position further in front.

These small changes make a big difference, as the A7 II feels a lot better in the hand compared to its predecessor.

Like most modern cameras, there’s also WiFi and NFC built-in for you to connect an iOS or Android smartphone and to use it to control the camera and transfer images.

The A7 II is very intuitive to use as most controls are where you’d expect them to be and there are a whole load of customisable buttons.

What I didn’t like was that it’s a little too easy to accidentally turn the Exposure Compensation dial – Sony isn’t the only company to put the dial there (Fuji does it for its X Series cameras as well) but not having a lock on it means that I can accidentally turn it when taking the camera out of a bag. LOTS GOING ON: The very busy control scheme of the Sony A7 II.

One other thing I found ­surprising was that the shutter is very loud. This is a little strange as the A7 II is a mirrorless camera, but it sounds just as loud or louder than DSLRs with mirrors that flip up and down when shooting.

The electronic viewfinder (EVF) is very nice indeed ­–­­­­ it has a ­resolution of 2.36 million dots which means that it looks almost like an optical viewfinder when you look through it.

However, the colour balance on the EVF seems to be different from the 3in LCD on the back – the EVF tends to be less saturated compared to the LCD on the back. TILT IT AND REVERSE IT: The Sony A7 II comes with a very slim adjustable 3in LCD screen.

As expected, image quality is excellent – I got very low noise images from all the way to ISO 800 and perfectly acceptable shots at ISO 1600.

At ISO 3200 and 6400, noise ­reduction kicks in a little ­stronger and smooths out some of the detail although you still get ­perfectly usable images even at these ISO settings.

Past ISO 6400, however, the battle to retain detail while ­keeping noise down is lost. There is a ­noticeable amount of noise in spite of noise reduction and lack of detail.

Battery life is actually pretty good – a single charge will ­definitely get you through a day of heavy ­shooting, and easily two days with moderate shooting.

The A7 II is an evolutionary update to the A7.

It doesn’t offer anything that would really make it worth ­upgrading to if you already own an A7. BETTER GRIP: The deeper, contoured grip of the Sony A7 II allows for a more comfortable hold despite being small.

However, if you’re looking for a full-frame mirrorless then there’s actually no other choice except for the A7 II and its siblings, as Sony is currently the only camera maker on the market producing such cameras.

Sony’s FE mount lens range for the A7 series is a little sparse (and expensive) right now, but there’s a whole third-party market for ­adaptors that allow you to mount lenses from other brands on the A7 II and get the advantage of in-body image stabilisation to boot.