HISTORY was made at London’s Battersea Power Station (BPS) recently after the much-loved landmark – which is at the heart of a £9bil (RM52.8bil) regeneration project – opened the doors to its first-ever residents.

Homeowners received their keys following the completion of Switch House West, the Power Station’s first major element. The rest of the building will follow in stages, with the Boiler House and Switch House East set to welcome new residents in the coming months.

The Grade II* listed former coal-fired power station had laid dormant and derelict for decades after decommissioning in the 1980s, but is undergoing a major transformation to restore and repurpose it for modern use.

It will be the crown jewel and focal point of a 42-acre (17ha) mixed-used development located on a former industrial brownfield site on the southern banks of the River Thames – which is regarded as one of the best urban regeneration projects not just in England, but all of Europe.

Besides adaptive reuse of the Power Station, the masterplan also sees the creation of new residential, cultural and event spaces interspersed with community facilities and serviced by a Zone 1 extension to the London Underground’s Northern Line.

There will be over 3mil sq ft of commercial spaces, including several hundred shops, cafes and restaurants, a theatre, hotel and medical centre. 19 acres of the site will be dedicated to public space, including a six-acre (2.4ha) park and 450m of river frontage.

Once complete, it will be one of London’s most vibrant neighbourhoods and business quarters. An estimated 25,000 people will live and work here, serving as the anchor for the Vauxhall, Nine Elms and Battersea Opportunity Area. 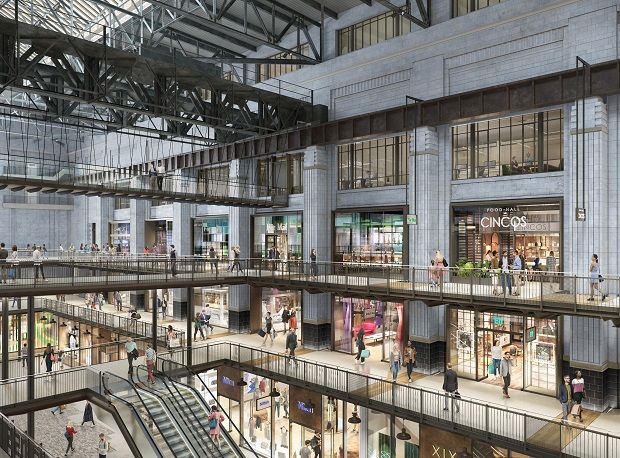 Approximately 25,000 people are expected to be living and working at Battersea Power Station after completion, making it one of London’s largest office, retail, cultural and leisure hubs.

While the overall BPS masterplan was designed by Rafael Viñoly, each phase of the development was also shaped by the innovative ideas and visions of a range of specialist architects.

Circus West Village has drawn millions of visitors since it opened its doors in 2017. The first phase is now home to more than 1,500 residents and includes facilities such as an entertainment room, cafe, spa and a gym.

The Power Station is now nearing completion, and its 253 new homes are among the finest in the city. A truly modern, mixed-used building that belies its utilitarian past, it is also house Apple’s new UK Campus.

The public facilities will open next year and include a 2,000-capacity event space, cinemas, office spaces and open piazzas. There will also be over 100 shops and F&B offerings, including an 18,500sq ft food hall, housed in the historic turbine halls.

Also notable is the Chimney Lift Experience, to be operated by global events and entertainment leader IMG.

A glass elevator transporting visitors 109m up inside one of the Power Station’s chimneys, it tops off with 360° views of the English capital’s skyline.

“Naturally, transforming a Grade II* listed brick building that was never originally designed to be inhabited comes with its own challenges. We worked closely with all parties involved, including the architects and Historic England, to ensure it is brought back to life most sensitively and respectfully.

“The building was on the UK’s ‘Risk Register’ before development started, which meant it was so badly decayed that it was at risk of further deterioration potentially beyond the point of return.

“We had to source over 1.7 million new bricks from the original quarries and rebuild all four iconic chimneys using the exact same building methods used to construct them in the past.

“Though challenging, it had always been our top priority to restore the Power Station to its original glory whilst retaining as much of its original essence as possible. Its heritage and history are deeply important and significant, ” said Simon Murphy, CEO of Battersea Power Station Development Company. The first phase, Circus West, neighbours the Power Station and was completed in 2017. It is now home to more than 1,500 residents and has a mixture of bars and restaurants, a cinema and other leisure facilities.

The primary design goal was to reinforce the Power Station as the site’s main architectural feature by setting it in a formal space defined by a reflecting pool and open views to and from the Thames and its north bank.

The development will also evolve with London’s new focus on sustainability. The mass of all new buildings were iteratively adjusted based on sun studies to ensure that all spaces will benefit from maximum daylight and views.

Simultaneously, the forms of each new structure were also developed to support both passive cooling and user-controlled enclosures.

This – together with a Combined Cooling, Heating and Power (CCHP) system on-site that links to a series of small plants feeding into surrounding residential buildings – makes BPS one of the largest, low-carbon developments in Europe.

“Given its history and iconic status, BPS has all the makings to become a top cultural destination in London. It has gained significant interest, especially among arts and culture-fond Londoners, in the past few years following several successful pop-ups and events.

“Both Circus West Village and the Power Station have a carefully curated list of retailers and operators to keep it entirely new, experiential and distinct from other retail destinations in London. The following phases will also see a good mix of upscale and high-street brands, ” added Murphy. Battersea Power Station is poised to become one of London’s most vibrant neighbourhoods. Standing on a 42-acre former industrial brownfield site, it is already regarded as one of the best urban regeneration projects in all of Europe.

Datuk Ahmad Pardas Senin, chairman of Battersea Project Holding Company, said, “As custodians of this globally significant building, this is indeed a proud day for Malaysia and the consortium of shareholders.

“A new lease of life has been given to this historic building as restoration of its landmark features and transformation into a sustainable development will make it a highly sought-after address.”

On the horizon is Phase 3A that includes Battersea Prospect Place, which will be renowned Canadian-American architect Frank Gehry’s first residential space in the UK. Its buildings will all have access to a private garden, and each home comes with its own winter terrace.

There is also Battersea Roof Gardens, designed by prominent British architecture firm Foster + Partners. It comprises a mix of apartments and a new hotel with a rooftop swimming pool, bar and restaurant.

Finally, there is Electric Boulevard. Conceptualised as London’s most exciting new high street, it will be home to world-class bars and restaurants, as well as flagship stores for some of the finest British and international brands.

Battersea Power Station Development Company chairman Datuk Wong Tuck Wai added, “Strong progress continues to be made across the entire project, and we are delighted to see the Malaysian Vision for this thriving new London neighbourhood now becoming a reality. Congratulations to the team who had worked relentlessly to see this through, especially during this challenging Covid-19 pandemic period.”

Visit batterseapowerstation.co.uk for details about the development, or follow @BatterseaPwrStn on social media for updates.