(Reuters) - A terrific run of form in the latter half of 2022 put Nick Kyrgios among the Grand Slam contenders and while the Australian knows much is expected of him heading into Melbourne Park next month he says he has learned to embrace the pressure.

After years of underachieving, the talented but temperamental Kyrgios won the Citi Open in Washington and reached his first Grand Slam singles final at Wimbledon, where he lost to Novak Djokovic.

The 27-year-old, who won the Australian Open men's doubles title in January with countryman Thanasi Kokkinakis, also reached the U.S. Open quarter-finals, going down in five sets to Karen Khachanov.

His best result in the Australian Open singles tournament was a quarter-final berth in 2015 and it is safe to say his compatriots expect him to go much deeper at the season-opening Grand Slam this time around.

"... I completely understand going on the match court with all this expectation that 'Nick Kyrgios (has a) legitimate chance to win a Grand Slam now'," Kyrgios told Eurosport in an interview published on Thursday.

"There's a lot of pressure there especially having the Australian Open and everyone in Australia expecting big things from me. It's a lot to handle sometimes. Being in the spotlight is not easy.

"I feel like I've embraced that and I've taken that challenge on. It's not easy, I've really worked hard to try and channel it, internalise it and use it as fuel," added Kyrgios, who is competing at the Diriyah Tennis Cup in Saudi Arabia. 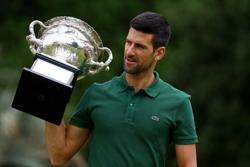