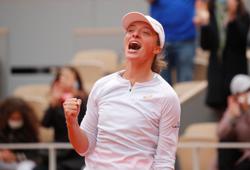 Halep came into the fourth round clash on a 17-match unbeaten streak having defeated the 19-year-old Swiatek, ranked 54th in the world, 6-1 6-0 in 45 minutes at the same stage last year in the claycourt Grand Slam at Roland Garros.

"I wasn't experienced at all then. That was my first match in a big stadium," Swiatek said in her on-court interview, after wiping away tears. "I was pretty stressed.

"Since then I have made huge progress and I have played few big matches ... it helped me a lot. And right now I think I can handle the pressure."

Swiatek later told reporters: "I did everything that my coach told me about tactics. So it was kind of like a perfect match for me."

Swiatek avenged that morale-sapping defeat and her victory under the closed roof of Court Philippe Chatrier in 68 minutes was no less impressive against the 2018 French Open champion, ranked number two in the world.

"I mean it wasn't like I was scared because of that, because I lost in 45 minutes last year. It was kind of like motivating for me just to play better," she said.

Halep arrived in Paris having won claycourt tournaments in Prague and Rome and with the Australian world number one deciding against defending her French Open title, the 29-year-old was the overwhelming favourite to add a third Grand Slam trophy to her cabinet.

But Swiatek started with aggression and painted the red clay with winners, often leaving Halep rooted to the spot.

Swiatek hit 30 winners to Halep's 12, while the Polish player did not face a single breakpoint on her service games.

It will be the first career quarter-final at a Grand Slam for Swiatek, but she was keeping her emotions in check.

"Just doing the same as I did before, like keeping my expectations low, even though I won against the second player in the world," she said.

"And just doing my job and not thinking about where I am and that I'm playing quarter-finals, because I know it's a great thing, but it also can make me anxious."

(Reporting by Sudipto Ganguly in Mumbai; Editing by Hugh Lawson)