BRYAN Leong is taking up the gauntlet as the country’s top hope in the sprints.

The 19-year-old made heads turn by splashing into the semi-finals of the men’s 100m butterfly at the Sandwell Aquatics Centre yesterday.

Little was expected of Bryan as it was his first Commonwealth Games outing but the teenager served a pleasant surprise by clocking 53.94 in Heat 7.

Bryan, who had former world champion James Guy of England and South African legend Chad le Clos for company, was ranked 13th fastest thus giving him a place in the top 16 for the semi-finals.

It’s a new personal best for Bryan as he previously posted 54.09.

His latest feat makes him the first swimmer to dip under 54 seconds since Daniel Bego set the national mark of 53.33 at the 2009 World Championships in Rome.

“I was quite nervous but also very excited (to race against the top swimmers). It will be an incredible experience after this (in the semis) and I will give my best,” said Bryan, a student at King’s College, London.

There was more good news as Phee Jinq En is also through to the women’s 100m breaststroke semi-finals.

Khiew Hoe Yean will return to the pool today to conclude his campaign in the 200m backstroke. 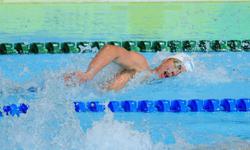