WOMEN’s pair Rachel Arnold-Aifa Azman stayed in the hunt for a medal when they toppled joint third seeds Rachael Grinham-Donna Lobban of Australia to storm into the semi-finals at the University of Birmingham Hockey and Squash Centre yesterday.

The joint-fifth seeds were in their element as they overcame the Australians 11-9, 4-11, 11-10 in a nail-biting last-eight clash.

Rachel-Aifa are the first Malaysian women’s doubles to reach the semi-finals at the Commonwealth Games.

On Thursday, Rachel-Aifa defeated Pakistan’s Faiza Zaffar-Amna Fayyaz 11-7, 11-8 in the second round.

Ainaa Amani Ampandi-Chan Yiwen had also advanced to the quarter-finals when they upstaged Canadians Hollie Naughton-Nicole Bunyan 11-4, 11-3 in the second round.

What should have been a stroll turned into a tricky encounter as Eain Yow-Ivan needed three games to subdue the brothers 11-3, 4-11, 11-8.

Syafiq Kamal-Ong Sai Hung were unfortunate to suffer a 9-11, 11-4, 11-7 defeat to joint third seeds Adrian Waller-Daryl Selby of England in the last 16. 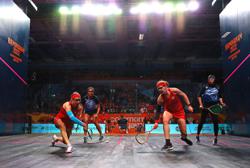