Raymond glad his children made careers out of squash 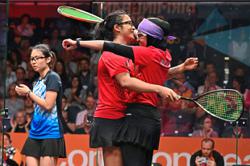 Acid test: Rachel Arnold (right) will be playing in the individual events where she faces a tough last-16 clash against Tesni Evans of Wales.

FORMER doubles international Raymond Arnold gave his children Timothy, Delia and Rachel the freedom to choose their careers and he’s happy he gave them the liberty to do so.

And as Raymond, 63, himself was a former national football goalkeeper and later a national squash player, it did not come as a surprise when all three of his children took up squash as their career paths.

Having seen their father work as a national coach during their childhood and some initial guiding at the Jalan Duta courts, the home of the national team in the 90s, the trio had been part of the national set-up since their junior days.

“What else do I need as a dad other than seeing my kids doing well in squash. I have never forced them to become squash players and they took up the sport and made it their own. I’m happy they were independent in achieving their success,” said Raymond.

“Rachel is playing in her third Commonwealth Games. She is only 26 and if she stays fit, she should be able to play in her fourth Games in 2026. That would be fantastic.

“I had always given them room to grow as players. Except for the beginning years, they have trained with different coaches and learnt different skills.”

Rachel will be playing in the individual events where she faces a tough last-16 clash against Tesni Evans of Wales.

An upset could see her playing the in-form world No. 7 Georgina Kennedy of England in the last eight.

Raymond feels that she may have a better chance in the women’s doubles partnering Aifa Azman.

“It would be tough for Rachel if she plays Tesni but knowing her, she will give a tough fight. But I believe she should have a good chance in the doubles with Aifa. If Rachel (and Aifa) can win a medal, it would be great,” added Raymond.

Delia also played in the 2010 and 2014 Commonwealth Games but a medal beckons for the Arnolds and Rachel has an outside chance of fulfilling that wish.

Tall order for Eain Yow to seize the Momen in home tourney
Malaysia’s defence of Asian Team crown in jeopardy
Defeat in San Francisco fuels fire in Rachel for future meets
No pressure as Rachel cruises on
Uphill task in depleted Malaysia’s defence of Asian team titles
Rachel fancies chances of breaking into world’s top 30 by year end
Aifa gets thumbs up, ready to do battle in US
Vincent-Amir take down top two seeds en route to historic gold
Dream double dashed but Yiwen hopes to win bronze with Ainaa
Rachel’s fine run comes to an end