PETALING JAYA: After a long period of uncertainty, the Malaysian Squash Open is finally back and will start from Nov 23-27 after last year’s edition was shelved due to Covid-19.

The Squash Racquets Association of Malaysia (SRAM) have managed to elevate this year’s tournament to bronze category with a prize money of US$50,000 (RM209,000) each for both men and women’s categories.

Since its inception in 1975, the tournament has been a regular fixture for many top professionals and the women’s competition has also been a World Series event until 2014.

Among the top players who have made their mark in the competition includes homegrown star Datuk Nicol David. The Penangite and eight-time world champion have won it a record eight times from 2005-2013.

The tournament this year packs a lot of quality with several players in the world’s top 40 signing up.

Leading the way for the men’s event will be Colombia’s world No. 12 Miguel Rodriguez, who is the top seed.

Seeded second will be world No. 15 and reigning Asian individual champion Saurav Ghosal of India while the third seed will be Malaysia’s No. 1 and 2016 world junior champion Ng Eain Yow.

Eain Yow will be out to win his second title after lifting the trophy in the 2019.

Also in the mix will be national No. 2 Ivan Yuen, Syafiq Kamal, Addeen Idrakie and Darren Rahul Pragasam.

In women’s event, Malaysia’s No. 2 Rachel Arnold will lead the challenge with in-form Aifa Azman and Chan Yiwen.

A host of exciting Egyptian players led by world No. 8 Salma Hany and No. 14 Nadine Shahin will also be looking to make their mark.

“I am really looking forward to one of our players making the final and hopefully winning the title,” he said.

“I also hope to see all squash enthusiasts and supporters come forward to rally our players.”

The event will be held at the National Squash Centre in Bukit Jalil and entrance is free. 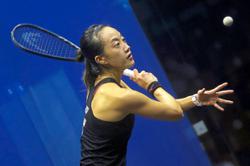