Angie banks on coach Aaron to make it big 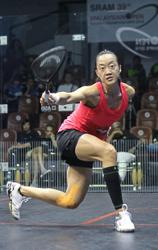 Now, upcoming Angie Ooi Zhi Ling from Penang wants Aaron to do the same for her.

Angie, who turned professional in January 2018 is now ranked 208th and her best ever rankings was 128 in March last year.

She featured in four PSA tournaments last year and lost in the early rounds each time, except in the Hong Kong Challenge Cup where she reached the quarter-finals.

Angie said she did not resume her studies after her Sijil Pelajaran Malaysia (SPM) examinations in 2017 as she wanted to fully focus on squash.

“My dream is to be among the top women squash players in Malaysia and I hope coach Aaron can help me achieve that.

“He played a big part in moulding Wee Wern to be a real good player, who gives her best in every match,” said Angie, who was not pleased with her performance in the PSA tournaments last year.

“I have faith in the coach and believe that he has the experience to help me improve every aspect of my game.

“I need to focus more on my mental strength. I also need to avoid getting injured. I suffered a sprained right ankle last year and it took me a month to recover,” said Angie, who has yet to play a PSA tournament this year.

“I am not sure whether there will be any tournaments this year but I aim to break into the world’s top 100 next year. I need to play about five to eight tournaments next year to improve on my world rankings.

Two men down, now Sivasangari goes for Addeen
Eain Yow hoping tournament in Cairo gets nod
Squash meets KOed by CMCO
Jessica finds perfect role model to bounce back from injury
Eain Yow just not good enough for world No. 1 Ali
Eain Yow passes test of character against James
Eain Yow breaks sweat to clear first hurdle in Doha
Low expectations when it comes to competing abroad
Sivasangari out to get even with Wee Wern
Ivan, Wee Wern earn it!