KUALA LUMPUR: Wee Ming Hock picked up squash when he was seven, turned professional when he was 17 two years ago and moved up the rankings quite fast – from 540th in July, 2018 to 265 this month, a 275-rung climb.

But this is where it gets tough. The lad from Kota Baru, who will turn 19 on June 29, said he has a target of breaking into the top 150 by the end of this year.

“I also want to win at least one PSA title every year. But I don’t think I would be able to achieve it this year as most tournaments have been cancelled. I may have to wait until the end of next year,” said Ming Hock, who has yet to win a PSA title since turning pro.

His lack of titles may be his big undoing.

He featured in eight PSA tournaments last year and his best outing was in Haining Open in China when he reached the quarter-finals by upsetting eighth seed Chua Man Chin of Singapore 3-1.

“My main fear is that if I fail to perform in tournaments next year, I could be dropped from the national team. But I will not let that happen. I will try my best,” said Ming Hock, who helped Malaysia win the SEA Cup team gold medal in Bangkok in February.

Ming Hock, who is pursuing pre-university studies at Bukit Jalil Sports School, was coached by Lawrence Kwan for the last three years. Since January this year, he is being coached by Jess Tay. No national team place, no problem for Nazihah 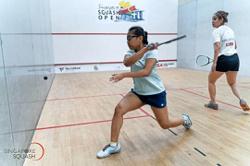 Amirah’s American dream on hold – but not her training