The 32 national and back-up players have been training at their homes under the supervision of their respective coaches since the movement control order was imposed on March 18.

“The players were disciplined. Bounx sponsored and coordinated the fitness competitions and also rewarded RM250 each to the winners of first and second competitions, ” said Maniam.

“It was an interesting way to check the fitness level of the players and I believe we are the first sports association to have done so in Malaysia.

“All the 32 players comprising 17 men and 15 women featured in the fitness competitions.

“And the player, who managed to do more exercises, in the time frame, was declared the winner. He then moved to the next round by challenging another player.

“We had four rounds, first, quarter-finals, semi-finals and the final. The winners move to the next round while the losers featured in the losers pool.”

National No. 1 men player Ng Eain Yow (pic) lost in the semi-finals while the winners of the first and second competitions were youngster Mohd Amir Amirul and Wee Ming Hock.

“Amir and Ming Hock each received RM250 but the money would be channelled to charity, ” said Maniam.

Asked when the players would be back to training at the National Squash Centre in Bukit Jalil, he said: ”The players will continue to train at their respective homes until we get the greenlight from National Sports Council.” 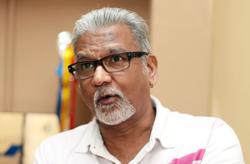