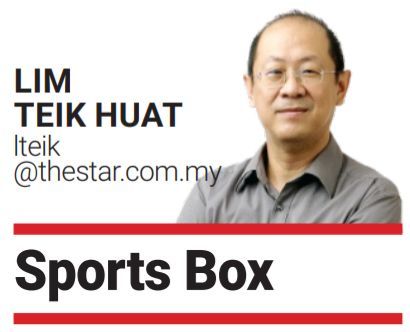 ARE the Tokyo Olympics going to become a mega Covid-19 super spreader event?

The local residents are increasingly worried of this aspect and it’s not surprising that with less than 100 days approaching before the country hosts the biggest sporting show on earth, the enthusiasm is contained than it would have been in normal times.

A Kyodo news agency poll released on Monday revealed that only 24% of the local population supports the idea of going ahead with the Olympics.

The current government is adamant it is doing its best to push ahead with the staging of a successful Olympic Games as cancelling it with the exception of a natural disaster will be unthinkable.

But just why did the government think it is okay to welcome, say, 80,000 athletes, coaches, media and other related officials from more than 200 countries when the vaccination programme had barely started?

And mind you, Japan does not require those jetting in for the Olympics to be vaccinated.

MotoGP, Formula One, the English Premier League and NBA have implemented a bubble concept in organising their championships but the scale of the Olympics is different.

One is talking about assembling people from all corners of the earth who come from countries with different transmission rates.

Combine that with the fact that Covid-19 infection rates are on the upswing in Europe and now in Asia.

Japan was served with an early warning when FINA, the governing body for aquatics, decided to call off the upcoming Olympic qualifiers for diving and artistic swimming in Tokyo after they could not get an assurance on the health measures taken to protect the participants.

FINA later reinstate the Olympic qualifiers with new dates in place next month after the local organisers provided the assurance.

But that was before Japan started to experience a steep rise in Covid-19 cases.

Japan reported more than 4,000 cases on Wednesday as it started to grapple with a fourth wave of the pandemic, prompting the Tokyo Medical Association to raise its concerns about hosting the Games.

Youth and Sports Minister Datuk Seri Reezal Merican Naina Merican has also come out to assure that the safety of the national athletes remains the top priority.

“At the moment, the Japan Olympic Committee (JOC) have not informed the Olympic Council of Malaysia (OCM) about that (rising cases), but we will keep our eyes and ears open, ” said Reezal.

“Naturally, the safety of our athletes is our priority.

“This is why we are going through the vaccination process to ensure they are protected.

“But if in regards to whether the Olympics will go on (as planned) or not, we will have to wait for the International Olympic Committee (IOC) and JOC, ” he added in direct response to the rise in new cases in Japan.

It’s a comforting thought though for the 264 athletes, coaches and officials, who will be involved in the Tokyo Olympics and Paralympics, that they would have got their double-shot Covid-19 vaccine on Tuesday by the time they leave Kuala Lumpur for the Games. Time for our male divers to step up to the plate in World Cup
In-form Devils will outshine Reds in entertaining tie
Power of people overpowers greed and racial discrimination in sports
Red-letter day for United and Liverpool
The new scoring system - a smashing point or a point that needs to be smashed
Great job by Lee, but we must not depend on only one player to bring glory
Hats off to courageous ladies for taking on bigger roles in sports
Are we on right trail of leadership to reach summit of success in sports?
Disheartening to see local coaches not getting their due$
Do we need SOP to prevent another kind of virus from weakening Malaysian sport?