alen Green and Kevin Porter Jr. combined for 51 points as the Houston Rockets extended their homecourt winning streak to three games with a 132-123 double-overtime victory over the Philadelphia 76ers on Monday.

Joel Embiid scored a game-high 39 points, but his late turnover led to a Porter free throw with 2.9 seconds left that forced the second overtime. Embiid fouled out on the play. Tobias Harris added 27 points on 7-of-8 3-point shooting for the 76ers, while James Harden posted 21 points and seven assists in his return from a 14-game absence. Harden missed 15 of 19 shots.

When Green completed a three-point play at the 1:48 mark of the fourth, the Rockets led 108-105 only for Harden to bury a 3 at the shot-clock buzzer on the ensuing possession for the 76ers. Houston forced a turnover with three seconds left, but Green missed at the buzzer to force overtime.

Andrew Nembhard continued a memorable California swing with a personal eight-point flurry as part of a late 13-2 burst that allowed road-weary Indiana to shock Golden State in San Francisco.

Facing a team that had won 10 straight at home on the second night of a back-to-back without star Tyrese Haliburton, the Pacers led by as many as 16 points and then, surprisingly, had enough energy to finish off the defending champions. Nembhard finished with a season-best 31 points. He hit 13 of his 21 shots and a season-best five 3-pointers.

Klay Thompson paced the Warriors with 28 points, shooting 8-for-16 on 3-pointers while his teammates went just 5-for-28.

Giannis Antetokounmpo had 34 points and 13 rebounds as visiting Milwaukee continued its dominance over Orlando.

Bobby Portis added 18 points and 10 rebounds for Milwaukee, which has won 12 straight against the Magic. Jrue Holiday had 17 points, eight rebounds and 10 assists, while rookie AJ Green scored a career-high 12 points off the bench.

Kawhi Leonard's jumper from about 18 feet away broke a tie with 1.4 seconds left and Los Angeles pulled out a victory against host Charlotte in a back-and-forth game.

Paul George poured in 19 points and Leonard, who scored the tying basket on the Clippers' previous possession, finished with 16 points. It was both players' first game back in the lineup after missing time with injuries. Charlotte's P.J. Washington missed a potential tying jumper at the buzzer.

Kelly Oubre Jr. led the Hornets with 28 points, Washington posted 26 and Terry Rozier had 22 points. Nick Richards supplied 11 points and 10 rebounds and Mason Plumlee added eight points and 12 rebounds, but the Hornets were outscored in three of the four quarters.

Shai Gilgeous-Alexander scored 35 points, his seventh straight game of 30-plus points, to lead visiting Oklahoma City to a come-from-behind win over Atlanta.

The win was the third straight for the Thunder and ended a three-game losing streak to the Hawks. It also snapped Atlanta's two-game winning streak. Oklahoma City had five others score in double figures, including Josh Giddey, who scored 12 of his 17 points in the fourth quarter, and Ousmane Dieng, who came off the bench to score 15.

Atlanta was led by Dejounte Murray's 24 points and Trae Young, who returned after missing Friday's game with a sore shoulder to post 23 points and 10 assists. Bogdan Bogdanovic scored 17 points and Clint Capela added 14 points and 16 rebounds.

After a lackluster first half, Boston used a strong performance on both ends of the floor in the third quarter to pick up a road victory over Toronto.

Boston erased a six-point halftime deficit by outscoring Toronto 35-18 in the third. The Celtics shot 12 of 21 from the floor in the period and led 91-80 entering the final 12 minutes. Jayson Tatum led all players with 31 points and 12 rebounds. Jaylen Brown finished with 22 points, eight rebounds and eight assists as the Celtics earned their second win in a row.

Pascal Siakam scored a team-high 29 points for Toronto, which saw its home record fall to 9-3. Scottie Barnes added 21 points for the Raptors, who received 20 points off the bench from Gary Trent Jr.

The Grizzlies were without their top three scorers: Morant (ankle), Desmond Bane (toe) and Jaren Jackson Jr. (foot). Memphis, which has won five of its past six games, got 18 points and 10 rebounds from Santi Aldama and 17 points from Dillon Brooks.

Deandre Ayton registered 20 points and eight rebounds and Cameron Payne added 14 points and 10 assists for the Suns, who lost for just the second time in the past nine games. The Suns used a 12-3 run during the third quarter to move within 76-60 with 6:30 left. But Dallas built a 96-75 lead by the end of the period and continued to lead by a comfortable margin for the entire final stanza. 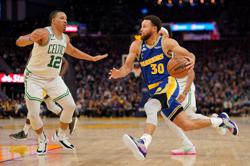