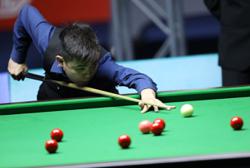 PETALING JAYA: Having shone at the SEA Games, Lim Kok Leong and Moh Keen Hoo stayed in the hunt to become the best at the continental level when they advanced to the semi-finals of the Asian 6-reds Snooker Championship in Kuala Lumpur.

Keen Hoo made a fiery start in the knockout rounds after whitewashing Alijalil Ali of Iran 5-0.

He will meet his third Iranian opponent in Amir Sarkhosh, who is the top seed, in his semi-final encounter today.

“I and Kok Leong tried to make it an all-Malaysia final at the SEA Games but it did not materialise and we hope it can be achieved tomorrow (today),” said Keen Hoo, the son of former snooker ace Moh Loon Hoong, yesterday.

“This is the third Iran player I will face. I have played him many times and our matches have been very close.

“I won this title in 2015 but that was a long time ago and I need to keep playing well to win.”

Boosted by the SEA Games success, Kok Leong had a rousing start in the knockout stage as he beat 2021 world amateur snooker champion Ahsan Ramzan of Pakistan 5-3 in the last 16.

In a close last-eight clash, Kok Leong overcame Jia Jun Ong of Singapore 5-3 to storm into the semi-finals where he will play Iran’s Siyavosh Mozayani today.

The semi-finals and the final will be held at the High-End Snooker Club in Cheras, KL, today. Thor Chuan Leong also qualified for the knockout stage but lost in the last 16 where he fell to Jun Ong 5-4.

The tournament is one of the many events lined up in the World Snooker Championship Series.

The next event will be the World 6-reds Snooker Championship which begins on Friday.