By David Painter and Violet Gonda

LONDON (Reuters) - For a chess championship, the attire is a bit unusual: everyone is wearing swim trunks and goggles.

And chess clocks are replaced by how long you can hold your breath at the dive chess world championships in London.

Dive chess is like normal chess but played underwater with magnetic pieces. Each player has to hold their breath while making their move. Once they come up for air, it's their opponent's turn.

Over four hours on Sunday, 10 players dived and strategized at the Leonardo Royal Hotel pool.

"I thought it would be a breeze, but it definitely isn't," said player Zarein Dolab. "Trying to see the pieces, keep yourself down there is a lot more difficult, especially if you are playing a long game."

Speaking of the skills needed, Mazurkiewicz said: "I think that 60% is chess and 40% is like other skills - swimming, keeping your body controlled, your pressure and your breath."

The unusual championship is the brainchild of American Etan Ilfeld, who wanted to incorporate a physical element to make the game even more challenging.

Ilfeld, who now lives in England, started playing chess when he was 4 years old and is a chess master. 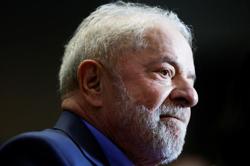