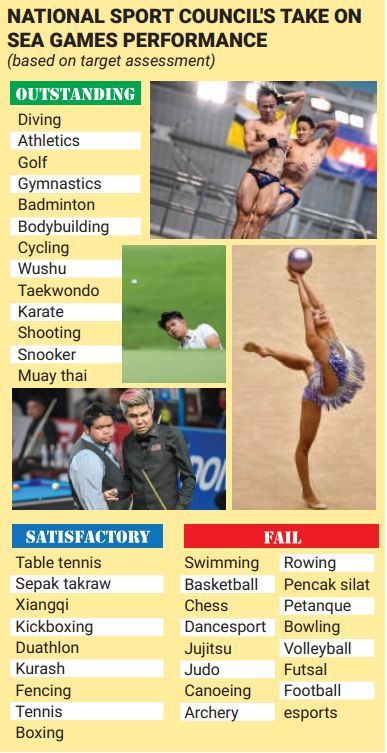 AFTER three years of of inactivity due to the Covid-19 pandemic, the SEA Games in Hanoi came as a welcome relief for regional sports.

It was wonderful to see some 5,600 national athletes from 37 sports battling for honours and so many new faces coming to the fore.

The rash of Asian level performances has also seen the standards of the Games raised to a new level.

The Malaysian contingent did surpass their target of 36 golds, 35 silvers and 75 bronzes but there was nothing to gloat about.

Not only did we slide down the overall standings to sixth, where we finished behind Singapore, the tally of 39-45-90 was the lowest Malaysia have finished since the 1983 Games.

Singapore not only won 47 golds, they had sent just 476 athletes compared to Malaysia’s 584.

However, the national divers, as usual, were a class above sweeping all eight golds on offer.

But that was probably the only high point. Malaysia continued to fall behind in other important Olympic disciplines such as swimming, recurve archery and track discipline in athletics.

We could only claim one gold from swimming this time, a far cry from the eight won when Vietnam last hosted the SEA Games in 2003.

The archery recurve team also failed to contribute a gold for the second straight SEA Games.

Athletics and swimming offer the most medals in a multi-Games and that was the main reason why Singapore stayed ahead of Malaysia.

The republic raked in 21 golds from swimming, with the Quah siblings (Zheng Wen, Jing Wen and Ting Wen) accounting for 14, and an impressive six from fencing, to finish with a 47-46-73 haul.

The Youth and Sports Ministry had set what many saw as a safe target, well below the 56 golds won in the Philippines in 2019 due to the omission of 25 events Malaysia had won at that time.

Among the events left out in Hanoi were squash (four), lawn bowls (four), both of which are not Olympics sports, as well as figure skating and speed skating (two), rhythmic gymnastics (three) and breakdance (one).

On the bright side, it is worth noting that 142 of the 367 Malaysian athletes who made their first SEA Games appearance managed to contribute 15 golds, 21 silvers and 44 bronze medals.

They can improve and bring better results.

Youth and Sports Minister Datuk Seri Ahmad Faizal Azumu has reminded national sport associations that achieved their targets not to be contented as the Cambodia Games are not that far away.

“I will ask the National Sports Council and the NSAs to review the involvement of the seniors and athletes who did not produce satisfactory performances.

“If we have to drop them, that is what we have to do because the budget allocations will be based on current performances and not past reputations,” said Faizal, who pointed out that bonus gold medals had come from golf (2), karate (1), wushu (2), taekwondo (1), shooting (1), cycling (1) and artistic gymnastics (1).

“Some targeted sports did not achieve, otherwise we would not have had to wait until the last three days to hit our target.

“If all the sports had met expectations, we could have won 45 gold medals easily.”

It is also worth noting that Malaysia bagged a total of 30 gold medals from Olympic sports, with diving (eight golds), athletics (five), gymnastics (four) and karate (four) being the biggest contributors.

The other Olympic sports that contributed gold were cycling, shooting, golf (two each), swimming, badminton and taekwondo (one each).