Ready to strike: Ahmad Nor Iman Aliff Rakib (right) in action against Vietnam’s Huynh Hoang Phi during the muay thai men’s below 54kg category at the Vinh Phuc Gymnasium. — Bernama

TEENAGER Ahmad Nor Iman Aliff Rakib stayed cool in the midst of the screaming noises of the home supporters to clinch the final gold medal for Malaysia in muay thai at the Hanoi SEA Games.

The 18-year-old son of former national boxer Rakib Ahmad punched his way to success when he overcame homester Huynh Hoang Phi 30-27 in the men’s below 54kg final in Vinh Phuc Gymnasium yesterday to deliver the 39th gold medal for the nation.

Nor Iman, the reigning world junior champion, put himself on course for a shot at the gold medal in his debut SEA Games after beating Filipino Ariel Lee Lampacan 30-27 in the semi-final.

He had the slight advantage in height in the final against his 25-year-old opponent, who was one of the golden hopes for Vietnam in the men’s division.

But the fighter who hails from Pengkalan Chepa in Kelantan, sealed the gold medal victory by winning all three rounds (10-9, 10-9, 10-9) to make his father proud.

His father had bagged a bronze medal in boxing for Malaysia in the 1998 Commonwealth Games in Kuala Lumpur.

“It never crossed my mind that I will be one of the medal contenders when I joined the centralised training for SEA Games three months ago,” said the debutant.

“I’ve never fought in the senior championship but I knew I had a slight chance if I stayed patient.

“It was not an easy contest as the atmosphere was noisy as the host country fighter was fighting.

“But I was only focusing on my fight and nothing else mattered.”

Malaysia also got a silver through Nur Amisha Azrilrizal in the women’s 51kg category. She lost 27-30 to Thai fighter Srila Oo Wangsawang in the final yesterday. Team manager Saifulnizam Mohd Shahar was pleased that they defended the one gold won by Rifdean Masdor in the sport in Philippines three years ago.

“Rifdean could not defend his gold in Hanoi this time because the Vietnam organisers removed all the lower weight categories,” he said.

“Rifdean took part in the boxing competition this time (where he managed to win a bronze).

“We did not target the gold as we were not sure where our exponents stood as they had no chance to fight in the senior level because of the pandemic.” 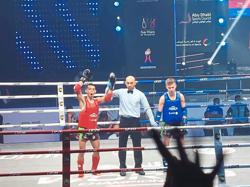