Power packed: The exponents in joyous mood after they hit Malaysia’s 36-gold medal target in the team event. — Bernama

THE national kumite team have one unique trait that separates them from the other sports in Hanoi – all their three coaches are former Games gold medallists.

R. Puvaneswaran is a five-time winner between 1999-2009 while L. Kunasilan delivered at the Philip-pines 2005 and Senthil Kumaran won at the 2017 KL Games.

Make that four as the team’s technical director P. Arivalagan is a seven-time Games champion.

With the wealth of experience the kumite team delivered five golds at the South-East Asia Karate Championships (Seakf) in Cambo-dia but the real test was in Hanoi and they did not disappoint.

They picked up four with debutants stealing the show on the opening day. C. Shahmalarani romped to the women’s 50kg title while H. Sureeya Sankar won in the men’s below 67kg category.

Veteran R. Sharmendran fought his way to a third straight Games title in the men’s below 75kg and the men’s team saved the best for last when they rose to the occasion to deliver only the second time in the Games history. Sureeya Sankar won gold in the below 67kg category.

“The sweetest win was the team event. The exponents were fired up to win as it meant everyone will return home with a gold medal,” said Puvaneswaran.

“We won five golds in SEAKF but the SEA Games were a totally different situation for us in terms of handling emotions, the pressure and also the judging standards.

“We only set a three-gold target in Hanoi and we’re happy to match what we achieved from the last Games in the Philippines in 2019.”

“Each of us (coaches) was given a few exponents to handle and we worked on improving their skills and tactics.

“We also shared our experience as we had gone through similar situations,” he added.

Their next mission will be the Hangzhou Asian Games next year where they will be hoping to end their gold medal drought since the 2014 edition in Incheon.

Based on the high level of confidence shown in the Vietnamese capital, the gold is certainly within reach. 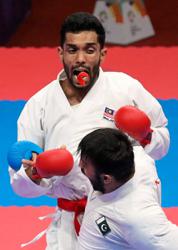 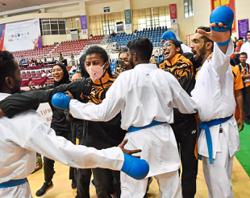