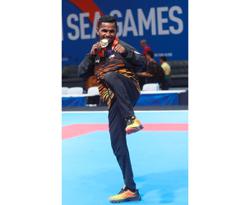 HANOI: C. Shahmalarani opened the account for the Malaysian karate team by taking gold in her SEA Games debut by winning the women's kumite below-50kg event.

The 24-year-old defeated Chippensuk Chanyanuk of Thailand, who broke her hand in the final and could not continue the bout at the Ninh Bình Province Sports Gymnasium.

Shahmalarani advanced to the final after beating Ririhena Sharon Verlina of Indonesia 9-1 in the second round and Laos exponent Laoyang Kengthong 8-0 in the third round.

He started his SEA Games campaign with a 3-1 win over Vietnam's Dang Hong Son and beat Manantan John Matthew Coronel of Philippines 8-0 to reach the final.