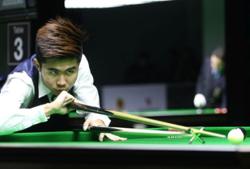 IT WAS a golden birthday celebration for Lim Kok Leong. He turned 27 in style by winning the men’s six-red snooker event last night.

Kok Leong turned the tables on the world amateur runner-up, Filipino Jefrey Roda, 5-3 in the final at Ha Dong Gymnasium to ensure Malaysia continued their proud tradition of never missing out on a medal each time snooker and billiards is held in the SEA Games programme. The avenger: Moh Keen Hoo had to settle for bronze after losing to Jefrey Roda but Lim Kok Leong (pic, above) made up for it by beating the Filipino to take gold.

It was the second SEA Games gold medal for Kok Leong who had partnered Moh Keen Hoo to win the men’s snooker doubles event in the 2019 edition in the Philippines.

Jefrey was the hot favourite for gold in Hanoi while Kok Leong was not seeded but came to Hanoi in good form, having retained his national title in March.

Kok Leong beat Thailand’s Suchakree Poomjang 5-2 in the semi-finals and it would have been an all-Malaysian affair in the final had Keen Hoo cleared his last four hurdle.

Keen Hoo, however, failed to get past the 22-year-old Jefrey, going down 4-5 in the other semi-finals.

“Keen Hoo told me I must not fail in the final as victory would make for a perfect birthday and luck was on my side.

“I am very happy as this is my first individual gold medal.

“There was no pressure on me and I took advantage of Jefrey’s inexperience as he is still young.

“I have to thank the association (Malaysian Snooker and Billiards Federation) for their support,” said Kok Leong, who will compete in the regular 15-red event after this. 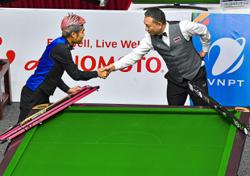