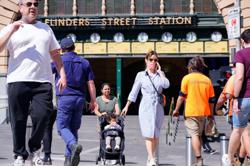 PERTH (Reuters) - The coastal city of Perth, often precluded from hosting major events by its geographic isolation, will steal the limelight on Saturday when the Australian Rules football Grand Final heads west for the first time.

The Melbourne Demons and Western Bulldogs will lock horns in the premiership decider in front of 60,000 fans at Perth Stadium, drawing the curtain on a second successive season uprooted by coronavirus restrictions.

While swathes of the eastern seaboard are in lockdown, the football-crazed state of Western Australia has kept COVID-19 at bay through the enforcement of strict border and quarantine controls.

The promise of a packed stadium led the Australian Football League (AFL) to select Perth as the venue for their showpiece match, which captures the national interest and frequently tops yearly television ratings.

"We love our footy and it's certainly our number one sport here in Western Australia, like it is in the country," retired West Coast Eagles premiership player Andrew Embley told Reuters.

"Since getting our new stadium in the last three years I think West Australians are proud of what we've got, and obviously now with the Grand Final everyone's really excited to put on, hopefully, a really good day."

Victoria's state capital, Melbourne, is the sport's spiritual home and until the pandemic forced a shift to Brisbane last year, the city had hosted every top-flight Grand Final since 1898.

"Aussie Rules" also has deep roots in Western Australian culture, where the code achieved acceptance as an alternative to rugby in the 1880s. However, the air of romanticism surrounding the sport has never been more evident than the present.

OPPORTUNITY OF A LIFETIME

Although the suburban rivalries which dominated the 20th century faded as a national competition materialised in 1987, a proud and fiercely parochial following developed for West Coast and the Fremantle Dockers - the state's AFL clubs.

Neither side qualified for the 2021 playoff series but the allure of witnessing a rare Grand Final spectacle, even an all-Victorian affair, meant tickets to the game sold out within minutes.

Some 180,000 anxious fans queued online for the 10,250 seats available to the general public after club members snapped up their allocation.

"It's an opportunity of a lifetime," said Embley, who won the 2006 Norm Smith medal for best-on-ground in West Coast's Premiership win against the Sydney Swans.

"We're never going to see a Grand Final here in Perth ever again so I know a lot of people are really interested and keen to somehow find a way to get to the game, because it's something that people would want to be a part of."

The season-ender will see two clubs competing on a fairly even keel, fresh off a bye week and unusually bruise-free after their most recent playoff encounters.

Melbourne topped the league ladder at the end of the home and away season and earned an easier finals pathway, while the fifth placed Western Bulldogs had to criss-cross unpredictable state borders and win three sudden-death matches on the trot.

The Demons faithful will be hoping their talismanic captain, Max Gawn, maintains a stunning run of form that includes a five goal haul and a 25 possession game - numbers which are exceptional for a 208 cm (6-foot-10-inch) ruckman.

Meanwhile, the Bulldogs can draw on the experience of their 2016 premiership cohort that includes influential midfielders Jack Macrae, who recently broke the league record for most disposals in a season (854), and skipper Marcus Bontempelli.

The Western Bulldogs have won two premierships and Melbourne have won 12, the last 57 years ago, in 1964.

(Reporting by Joel Dubber in Perth; Editing by Robert Birsel)