Olympics-Australian Olympians to be vaccinated before Tokyo Games FILE PHOTO: Australian Olympians pose in front of the Sydney Opera House at the unveiling of the team uniforms for the 2020 Tokyo Olympics, in Sydney, Australia March 31, 2021. REUTERS/Nick Mulvenney/File Photo

(Makes clear quote in paragraph 8 was from minister)

SYDNEY (Reuters) - Australian athletes going to Tokyo for the Olympics later this year will be given priority access to COVID-19 vaccinations, the government said on Tuesday.

More than 2,000 athletes, coaches and officials nominated by the Australian Olympic Committee (AOC) and Paralympics Australia will receive their shots before they travel to Japan for the July 23 to Aug. 8 Games.

"We want to see our athletes head to Tokyo to compete and then return to Australia safely," health minister Greg Hunt said in a statement.

Tokyo, Osaka and two other Japanese prefectures last week entered a state of emergency in an effort to contain a resurgence of the virus.

Australia, while highly successful at containing community transmission of the virus, has been relatively slow at rolling out the vaccine compared to other developed nations.

The AOC had been balancing their concerns over the safety of their athletes in Japan with not wanting to be seen to jump the queue for the vaccine ahead of the sick and aged.

"While vulnerable Australians remain an absolute priority as the vaccine rollout continues, (the government) understands the pressure our high-performance athletes have been facing as the Tokyo Games draw closer," said sports minister Richard Colbeck.

"This will be a very different Olympics and Paralympics, but our athletes deserve the opportunity to compete," he said.

AOC Chief Executive Matt Carroll said athletes, coaches and their families would be relieved by the government's announcement.

"This added layer of assurance is what they were seeking. The AOC will be working with our partners ... on the logistics to ensure the vaccination of our athletes does not place any additional load on the public system." 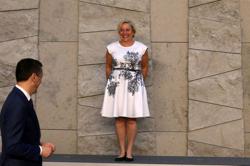