The results were made official after the minimum 30 had finished, following lengthy holds and with the weather deteriorating.

It was Feuz's first downhill win on the Streif slope after four previous second places.

His team mate Urs Kryenbuehl was one of those taken away by helicopter after crashing on the final jump. American Ryan Cochran-Siegle was the other after careering into the side netting.

The U.S. team said on Twitter that Cochran-Siegle, who was fastest in training on Wednesday, had a minor cervicle spine fracture (neck).

"He is currently resting at the team hotel, but will sit the remainder of the weekend out. His return to competition is TBD," they added.

The Swiss ski team said first medical examinations showed Kryenbuhl had suffered a concussion, a fracture of the right collarbone and a tear in the cruciate and inner ligament in the right knee.

He was expected to return to Switzerland on Saturday after an overnight stay in hospital under observation.

Friday's downhill in the Austrian resort replaced one originally scheduled for Swiss snow in Wengen. A second is due on Saturday.

Goggia leads the downhill standings with 380 points to Johnson's 240. 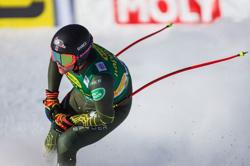