The 32-year-old is set to lose his Tour card as he is almost certain to finish the 2019-20 season outside of the top 64 in the world rankings, but he plans to regain it through the Qualifying School (Q-School).

The four-time SEA Games gold medallist can still make the cut – but only if he reaches the semi-finals of the World Snooker Championship from July 31-Aug 16.

However that’s surely beyond imagination, especially for a player who has struggled throughout the season.

Chuan Leong played a total of 13 tournaments but lost in the first round on 12 occasions.

Chuan Leong said he plans to sign up for the Q-School, which offers a total of 12 slots – four each from three separate tournaments.

He took the same route two years ago to earn himself another two-year exemption.

“It’s been a frustrating season. Not only did I struggle for results, but things were complicated further by the Covid-19 as it forced a number of tournament cancellations, ” said Chuan Leong, who made his WST debut in 2014-15 after securing his slot by virtue of being the Asian Snooker Championship winner in 2014.

“But I’m not giving up yet. I still have one last chance (to regain card) through Q-School, which will be held after the World Snooker Championship and I’m going to give it a shot.

Chuan Leong’s best result to date was reaching the last 16 at the 2016 Gydnia Open in Poland and 2015 Paul Hunter Classic in Germany.

Thor can’t hammer down a frame in snooker meet

No task too torturous for Thor in the qualifiers 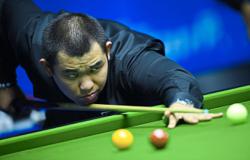 Thor gets fighting chance in the Crucible