PETALING JAYA: While most athletes are fearing that the enforced stay at home order and lack of intense training will make them gain weight, national karate exponent S. Prem Kumar (pic) is looking to do just that – get heavier.

Prem, who had been competing in the below 55kg event, will have to bulk up by adding 12kg to his weight to compete in the below 67kg for the first time in his career in the bid to qualify for the Tokyo Olympics.

The Sentul-born lad was based in Europe for the World Olympic Qualification Tournament in Paris from May 8-10 but the World Karate Federation (WKF) have pushed the dates to June 26-28, due to the Covid-19 pandemic.

The 26-year-old who had been training in Latvia since January said the postponement actually worked in his favour as he has more time to get used to the new weight class but he’s still not out of the woods.

“I have been training with R. Sharmendran in Latvia and we only returned home two weeks ago following the Covid-19 lockdown in Europe.

“The training was going on well and I have been competing in below 60kg in Europe and building up my physique to compete in the below 67kg, ” said Prem.

“Now I’m back home and it is tougher to build up my weight under the MCO... the last time I competed in the below 67kg event was during my junior days which was years ago. Things are so much tougher in the senior level.”

“I see going up the weight class is harder than losing weight. You need to eat the right type of food, the key is to build muscle and not fat. On top of that, you need to get used to your heavier body and adapt your movements too.”

“I have been getting input from the National Sports Institute (NSI) officials on the diet I should take but due to the MCO, I have been told to stay healthy first.”

Prem, who clinched his maiden gold in men’s 55kg at the Philippines SEA Games, said that despite the obstacles he will push himself as hard as he can for a berth as karate makes its Olympic debut.

“Nobody knows if karate will be offered in the next Olympics after Tokyo, so everyone is really fighting for honours. For me, the first step is to qualify... anything can happen during competition and if you have the luck you might even win the gold medal, ” added the 2018 Indonesia Asian Games bronze medallist. Back from Europe, but exponents need opponents 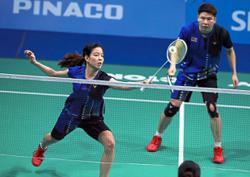 Athletes glad to be back in the game again