Floorball wants to be taken seriously

THE floorball fraternity in Malaysia wants to shed the sport’s image as a recreational sport and is yearning to be taken seriously following its two-silver achievement at the Myanmar SEA Games in December.

Both the Malaysian men’s and women’s teams finished second behind regional powerhouse Singapore at the Wunna Theikdi Stadium in Naypyitaw when floorball made its debut as a demonstration sport in last year's SEA Games.

With host Singapore almost certain to include floorball as a full sport for the 2015 SEA Games, the Malaysian Floorball Association (MFA) believe it is high time the sport receives recognition and support in the country.

“Despite floorball about to be included in the SEA Games and the Malaysian team winning two silver medals, not many people know what is floorball or that it is played in our country. We need a push to create awareness about floorball. Winning the silver medals in Myanmar has provided us the perfect platform to gain publicity,” says Edward Lim, floorball team manager at the SEA Games.

“Our immediate priority is to get recognition from the authorities and penetrate into the schools to get more youngsters to take up floorball. At present, it is difficult for us to get accepted by the school authorities because floorball is not part of the MSSM (National Schools Sports Council) or the Sukma (Malaysia Games) programme.”

There needs to be at least eight state associations before an application can be made for a sport to be accepted into Sukma.

Johor is expected to register their own floorball association in the near future.

The Penang-based Edward, who was one of the first to introduce floorball in Malaysia in 2002, adds that all the state and national level competitions are self-funded.

“Unlike other sports, there is no full-time training programme or funding for the national floorball team. The players and officials had to fork out our own expenses to compete in the SEA Games. We also faced difficulties in getting accreditation as Malaysian athletes. We cannot hold on to our best players mainly because of financial constraints and work or study commitments.

“We were unable to field our strongest line-up in Myanmar because several players were either unable to foot the bill or could not get time-off. We cannot hold on to our best players mainly because of financial constraints and other commitments,” says Edward.

Floorball can be best described as a form of indoor hockey. The main difference to field hockey is the equipment used.

A hollow lightweight plastic ball is utilised and the stick, made of carbon and plastic, has a wider base akin to the one used in ice hockey. 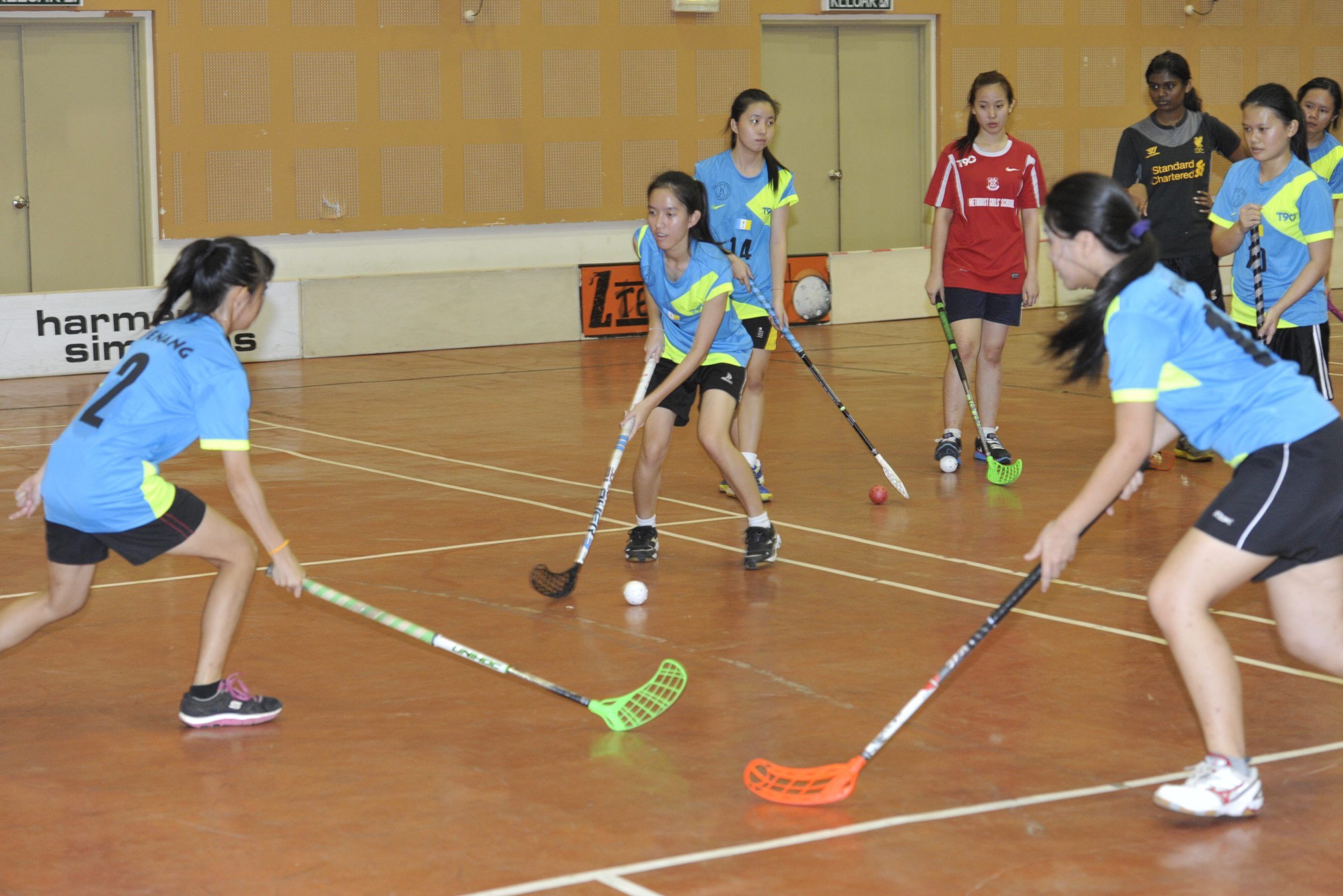 Floorball is a bit like indoor hockey, albeit safer and using rink boards.

There are five outfield players and a goalkeeper in the rink during play, with rolling substitutions allowed. Each match consists of three 20-minute periods.

Another similarity to ice hockey is the usage of rink boards on the playing area's perimeter. They prevent the ball from going out of play and can also be used strategically to change the ball’s direction.

Unlike futsal and badminton, the 50cm-tall rink boards need to be set up before floorball can be played in an indoor hall.

“Whenever we change training venues or rent a new hall to play a match, we need to ferry the rink boards ourselves. We have to haul the rink boards everywhere we play because it is not economical to purchase a new set every time. Each set costs about RM25,000,” explains Edward.

The size of an indoor floorball rink which can host a competitive match needs to be between 18 and 22m wide and 36 to 44m long.

“Compared to field hockey, floorball is much safer, especially for schoolchildren. The hollow plastic ball stings when hit against a player, but does not injure or cause a permanent mark on the body. There are also safety rules during the game such as a player cannot lift his or her stick above the knee level, and a back swing cannot be higher than the player’s waist level. Players who touch or block the opponent’s stick will also be penalised,” explains Penang Floorball Association committee member Daniel Soon.

“However, being safer does not mean floorball is easier to play. Since the ball does not go out of play, floorball can be physically demanding. It is common to see a player being fatigued and getting substituted after just one minute due to the fast pace of the game,” he adds.

Floorball, which is also known as innebandy in Norway and Sweden, originated in Sweden in 1970 and is widely played in the Scandinavian countries. In Asia, the sport has gained popularity in Japan and Singapore.

Singapore are the kingpins of floorball in South-East Asia. They have included the sport in their school programme – a move which helps them produce a big pool of young players. Edward Lim: 'We cannot hold on to our best players mainly because of financial constraints and work or study commitments.'
There is also a thriving clubs-based floorball league in the republic.

Malaysia is very far behind in comparison.

“We have limited competitions for our players. Our biggest local tournament is the inter-state Merdeka Cup. As such, the national team plays matches against Singapore club sides to stay sharp and improve our standard,” says Edward, who stresses that it would be tough, but not impossible, to aim for the gold medal at the Singapore SEA Games.

MFA intend to get more states to play the sport and form their own floorball associations in time for the 2015 Singapore SEA Games.

They are hoping to emulate lawn bowls, which received a boost in popularity following the 1998 Kuala Lumpur Commonwealth Games.

And so far, they seem to be on the right track.

Currently, floorball is mostly played by school and college students and young working adults. Most of them are introduced to the sport through their schools or church groups. Many continue to play the sport even after leaving school by joining clubs.

The lack of financial support and recognition has not deterred floorball enthusiasts, who mainly come from the Klang Valley, Penang and Sabah. They normally form their own networking groups to stay informed on the current floorball venues and upcoming matches.

In addition, MFA are continuing with their tie-ups with schools, even without the blessings of the MSSM and the state sports councils. MFA provides lessons and also organises inter-school competitions with the aim of enlarging the pool of floorball players in the country.

Hence, Edward is optimistic about the future of floorball.

“If we are able to emerge SEA Games runners-up for men and women without anybody’s help, imagine what we could accomplish with full preparations and support from the authorities,” says Edward

Those who wish to know more about floorball or are interested in taking up the sport can browse these websites: selangorfloorballassociation.blogspot.com or penangfloorball.org.