GEORGE TOWN: Datuk Nicol David, who is the state's youngest Datuk, probably will need some time to get used to the title.

"Just Nicol" was the reply when asked what she preferred to be addressed by as the humble 25-year-old lass shied away from the new title.

"The award came as a shock and I obviously didn't expect it. When I was asked to return earlier (to Malaysia) to receive this, I was very surprised and flattered that the state had recognised my achievements and was willing to support me in every sense," Nicol said Saturday after attending the investiture ceremony in conjunction with Yang di-Pertua Negri Tun Abdul Rahman Abbas’ 70th birthday celebration. 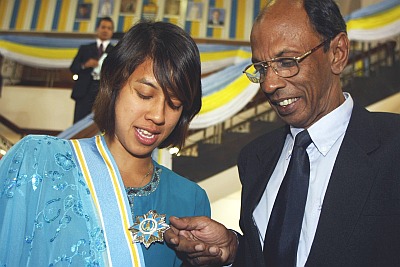 Nicol, who was among 497 state award recipients, received the Darjah Setia Pangkuan Negeri (DSPN) award which carries the title Datuk.

The reigning world woman's squash champion will, however, have to postpone celebrations as training and other obligations had her schedule booked for the next two weeks.

"She just got in from Amsterdam on Friday and she'll be leaving for Sarawak on Sunday to fulfil her duties as a United Nations Development Programme ambassador.

"The Malaysian Open and Singapore Open are also around the corner so it's a pretty hectic schedule for her," said Nicol's father Desmond David, 61, who was present at the ceremony.